In my May 2020 MREN USS Enterprise column I made a reference to the benefits of titanium as a hull structural material.

It related to the life of the USCG cutter Bear and I concluded the column with a suggestion that titanium would be a particularly useful and cost-effective structural material for sail training vessels, aircraft carriers, research vessels, cruise vessels, tugs and Staten Island ferries. I made this suggestion assuming that the hull design (shape) would have to be mature, and its technology upgrade expected.
I made a WAG estimate of the cost increase of a titanium hull and came to the conclusion that, from a life cycle point of view, titanium is a great deal for certain vessels. After writing the column I did not spend a lot of time thinking about it, until I came across a paper by my friend and occasional collaborator Dr. John Daidola in the December 2020 Naval Engineers Journal titled “Construction Costs of Titanium Hull Variants – Game Changer?”

John performed a much more detailed study of the lifecycle cost of a variety of vessels, but particularly a 260-m trimaran sealift ship. He compared the cost of a titanium vessel with a steel vessel and concluded that the acquisition cost of the titanium vessel would be $2.3B as compared to an acquisition cost of a steel vessel of $1.5B. However, the lifecycle savings of the titanium vessel would be $2.74B. In other words, once you build the first vessel in titanium, with the savings you can build the next vessel for free. That is called a two-fer!

Remarkably, on vessels with a lower hull structure cost fraction, the savings are even better.

Note that in one of those weird tunnel vision moments, I did not include USCG cutters in the list of titanium hull candidates in my column. But USCG cutters are the epitome of mature hull designs that see service periods that are almost measured in human lifetimes with little change in hull design in the next generation.

That bullet was explained to me by another deep-thinking engineer, Norbert Doerry, at the 2017 SNAME Annual Meeting’s presentation of Dr. Doerry and Dr. Koenig’s paper “Framework for Analyzing Modular, Adaptable and Flexible Surface Combatants.”
To me the title translates as: “How to Mix and Match your Fleet to get the Best Tactical Outcome for a Fixed Dollar, but one that can Change from Year to Year.” (Still not a great title)

This Navy conundrum is ancient, and actually the original six frigates are an early version of this debate.

An ideal Navy mixes and matches fleet units (combat vessels). A small Navy cannot afford to do this, but the U.S. Navy combined with the USCG can.  (The U.S. Navy is the largest Navy in the world. The USCG, by itself, is about the size of the German Navy)

The real question is: What am I going to build for the money I have, so that, when the shooting starts, I will have the most capable Navy? And then there is a secondary question: What should my fleet look like in times of peace to scare the bejeezes out of potential opponents?

Interestingly, this secondary question is even more pressing for a USCG cutter, since it has distinct peacetime and distinct war time functions. In so many words, depending on the national threat level, a USCG cutter may perform rescue missions or fire missiles, but always should tell a potential enemy that while the vessel may look nice and cuddly in rescue mode, it can become very mean indeed in a short period of time.

In practice, that has meant you scrap old ships and always build fancier new ones with newer technologies aboard. But note that, with the USCG, fancier new hulls on the outside look the same as the older ones. It is the stuff that goes inside of them that really drives fleet renewal design.

The decision when to build new ones generally is analyzed in Present Value terms (Is it cheaper to upgrade or maintain the old ship, or to build a new one) and John Daidola’s steel versus titanium comparison follows that path and shows it is cheaper to build in titanium.

However, Doerry and Koenig add another cost saving when these longer life hulls are used in series construction. Instead of using PV analysis, they propose the use of Real Options Valuation. This method differs from PV because it attempts to analyze the best approach when there are additional options on a project in the future (think in terms of stock options). Real Option Valuation is not new, but to apply it to naval fleet mixes and procurement is really clever. The most obvious question in Navy (and even more so, USCG) vessels is: What if I think in terms of PV (my available dollar) but in the PV include an option to upgrade vessels later in their life? I may or may not spend the option amount depending on my fleet needs at any one stage, and since I may not spend it, my PV becomes lower and in the future I would have a more capable fleet.

For example, the authors show that building good simple hulls, but waiting to fit fancy weapons until they are really needed is the better deal. And if the threat of war develops, the latest and greatest package can be fitted quickly on existing hulls to dominate the battle space, instead of limping along with less than the state of the art.

The bigger the Navy (and USCG combination), the cooler it gets. It especially argues for building lots of USCG cutter hulls, but leaving them mostly unoutfitted for naval combat. One can build 20 titanium USCG cutters for the life cycle cost of 10 steel hulls, and make them ready for sea, but only install one ship with the best weapons package. The world will know that you can build something that can dominate the battle space, but there is no need to fit all 20 with the latest and the greatest (which saves enough money to build a couple of additional hulls) if there is no immediate threat of war. Meanwhile the “enemy” will know that when they start to rattle their sabers you will not have 10 (if built in steel) obsolescent hulls, but instead will have access to more than 19 hulls that can be fitted with the hottest weapons much more quickly. This is a much better result than having 10 old “fancy steel” units and actually will defer cost until it is needed. This thinking already works with steel hulls, but if the hulls do not waste away it becomes even more cost effective and further strengthens Dr. Daidola’s argument.

So here we have three clever engineers who have developed two independent USCG procurement approaches, which each save incredible amounts of money, and, when combined, save even more money.

Is anybody paying attention in USCG procurement? I have long known and admired the USCG for its ability to do more and more with less and less. Why not use this bit of engineering to do even more?

For each column I write, MREN has agreed to make a small donation to an organization of my choice. For this column I nominate the NGO Shipbreaking Platform https://shipbreakingplatform.org/. Shipbreaking is a dirty and expensive mess. Reducing shipbreaking with titanium hulls reduces the mess. 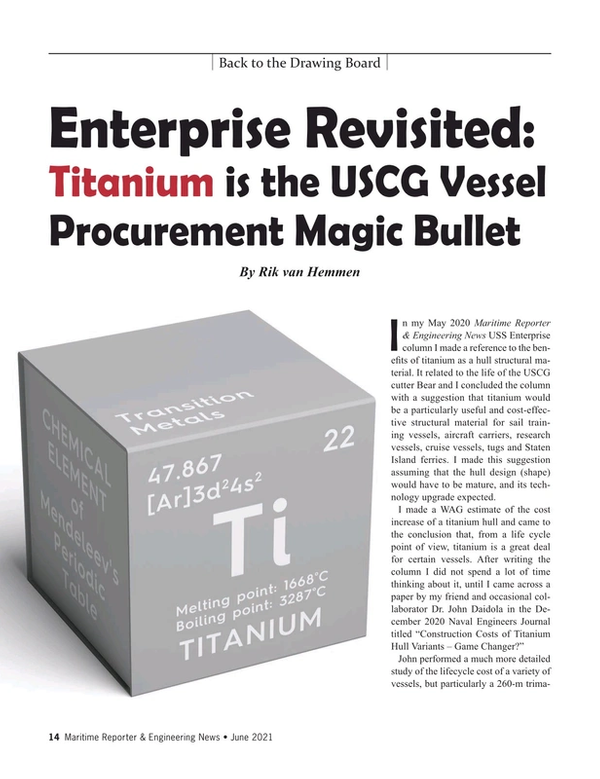 Other stories from June 2021 issue