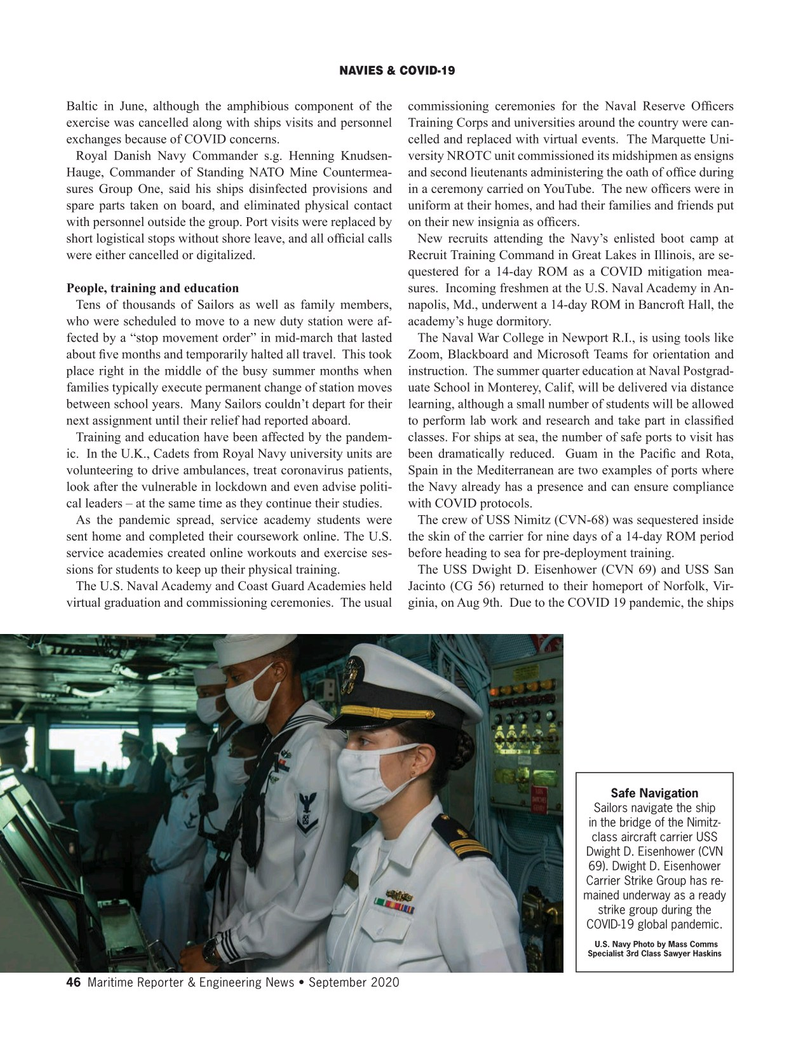 Baltic in June, although the amphibious component of the commissioning ceremonies for the Naval Reserve Of? cers exercise was cancelled along with ships visits and personnel Training Corps and universities around the country were can- exchanges because of COVID concerns. celled and replaced with virtual events. The Marquette Uni-

Hauge, Commander of Standing NATO Mine Countermea- and second lieutenants administering the oath of of? ce during sures Group One, said his ships disinfected provisions and in a ceremony carried on YouTube. The new of? cers were in spare parts taken on board, and eliminated physical contact uniform at their homes, and had their families and friends put with personnel outside the group. Port visits were replaced by on their new insignia as of? cers.

short logistical stops without shore leave, and all of? cial calls New recruits attending the Navy’s enlisted boot camp at were either cancelled or digitalized. Recruit Training Command in Great Lakes in Illinois, are se- questered for a 14-day ROM as a COVID mitigation mea-

People, training and education sures. Incoming freshmen at the U.S. Naval Academy in An-

Tens of thousands of Sailors as well as family members, napolis, Md., underwent a 14-day ROM in Bancroft Hall, the who were scheduled to move to a new duty station were af- academy’s huge dormitory.

fected by a “stop movement order” in mid-march that lasted The Naval War College in Newport R.I., is using tools like about ? ve months and temporarily halted all travel. This took Zoom, Blackboard and Microsoft Teams for orientation and place right in the middle of the busy summer months when instruction. The summer quarter education at Naval Postgrad- families typically execute permanent change of station moves uate School in Monterey, Calif, will be delivered via distance between school years. Many Sailors couldn’t depart for their learning, although a small number of students will be allowed next assignment until their relief had reported aboard. to perform lab work and research and take part in classi? ed

Training and education have been affected by the pandem- classes. For ships at sea, the number of safe ports to visit has ic. In the U.K., Cadets from Royal Navy university units are been dramatically reduced. Guam in the Paci? c and Rota, volunteering to drive ambulances, treat coronavirus patients, Spain in the Mediterranean are two examples of ports where look after the vulnerable in lockdown and even advise politi- the Navy already has a presence and can ensure compliance cal leaders – at the same time as they continue their studies. with COVID protocols.

As the pandemic spread, service academy students were The crew of USS Nimitz (CVN-68) was sequestered inside sent home and completed their coursework online. The U.S. the skin of the carrier for nine days of a 14-day ROM period service academies created online workouts and exercise ses- before heading to sea for pre-deployment training. sions for students to keep up their physical training. The USS Dwight D. Eisenhower (CVN 69) and USS San

The U.S. Naval Academy and Coast Guard Academies held Jacinto (CG 56) returned to their homeport of Norfolk, Vir- virtual graduation and commissioning ceremonies. The usual ginia, on Aug 9th. Due to the COVID 19 pandemic, the ships