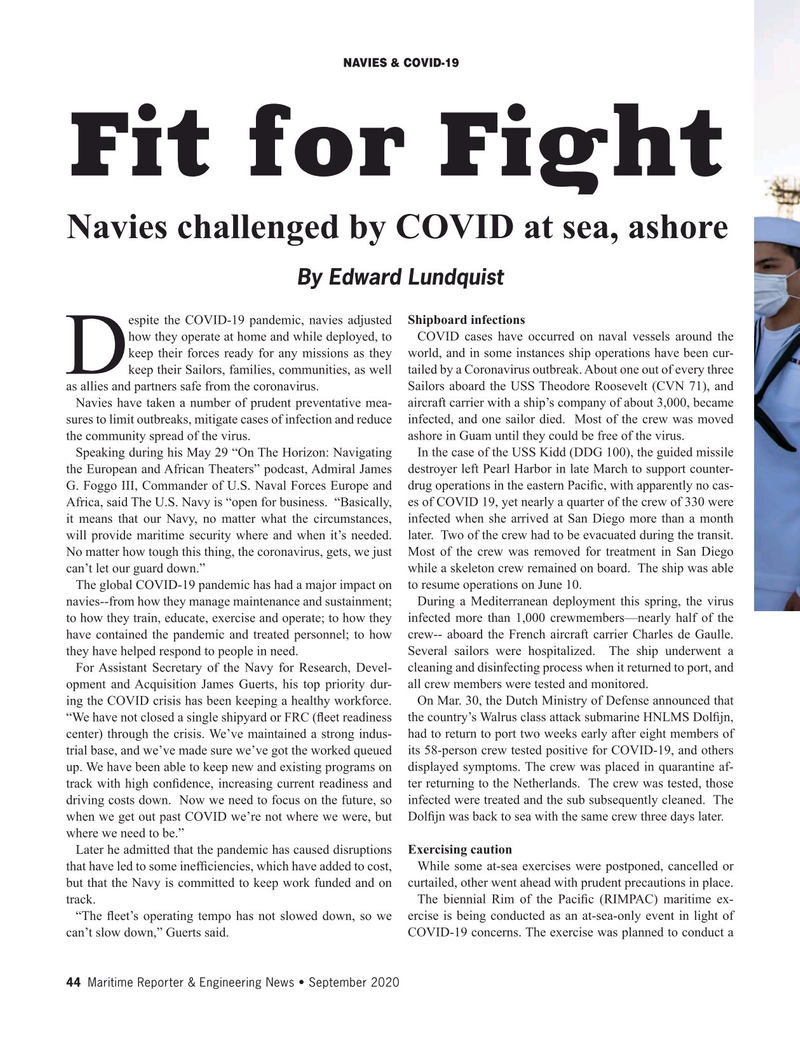 By Edward Lundquist espite the COVID-19 pandemic, navies adjusted Shipboard infections how they operate at home and while deployed, to COVID cases have occurred on naval vessels around the keep their forces ready for any missions as they world, and in some instances ship operations have been cur-

Dkeep their Sailors, families, communities, as well tailed by a Coronavirus outbreak. About one out of every three as allies and partners safe from the coronavirus. Sailors aboard the USS Theodore Roosevelt (CVN 71), and

Navies have taken a number of prudent preventative mea- aircraft carrier with a ship’s company of about 3,000, became sures to limit outbreaks, mitigate cases of infection and reduce infected, and one sailor died. Most of the crew was moved the community spread of the virus. ashore in Guam until they could be free of the virus.

Speaking during his May 29 “On The Horizon: Navigating In the case of the USS Kidd (DDG 100), the guided missile the European and African Theaters” podcast, Admiral James destroyer left Pearl Harbor in late March to support counter-

Africa, said The U.S. Navy is “open for business. “Basically, es of COVID 19, yet nearly a quarter of the crew of 330 were it means that our Navy, no matter what the circumstances, infected when she arrived at San Diego more than a month will provide maritime security where and when it’s needed. later. Two of the crew had to be evacuated during the transit.

No matter how tough this thing, the coronavirus, gets, we just Most of the crew was removed for treatment in San Diego can’t let our guard down.” while a skeleton crew remained on board. The ship was able

The global COVID-19 pandemic has had a major impact on to resume operations on June 10.

navies--from how they manage maintenance and sustainment; During a Mediterranean deployment this spring, the virus to how they train, educate, exercise and operate; to how they infected more than 1,000 crewmembers—nearly half of the have contained the pandemic and treated personnel; to how crew-- aboard the French aircraft carrier Charles de Gaulle. they have helped respond to people in need. Several sailors were hospitalized. The ship underwent a

For Assistant Secretary of the Navy for Research, Devel- cleaning and disinfecting process when it returned to port, and opment and Acquisition James Guerts, his top priority dur- all crew members were tested and monitored.

ing the COVID crisis has been keeping a healthy workforce. On Mar. 30, the Dutch Ministry of Defense announced that “We have not closed a single shipyard or FRC (? eet readiness the country’s Walrus class attack submarine HNLMS Dol? jn, center) through the crisis. We’ve maintained a strong indus- had to return to port two weeks early after eight members of trial base, and we’ve made sure we’ve got the worked queued its 58-person crew tested positive for COVID-19, and others up. We have been able to keep new and existing programs on displayed symptoms. The crew was placed in quarantine af- track with high con? dence, increasing current readiness and ter returning to the Netherlands. The crew was tested, those driving costs down. Now we need to focus on the future, so infected were treated and the sub subsequently cleaned. The when we get out past COVID we’re not where we were, but Dol? jn was back to sea with the same crew three days later.

where we need to be.”

Later he admitted that the pandemic has caused disruptions Exercising caution that have led to some inef? ciencies, which have added to cost, While some at-sea exercises were postponed, cancelled or but that the Navy is committed to keep work funded and on curtailed, other went ahead with prudent precautions in place.

track. The biennial Rim of the Paci? c (RIMPAC) maritime ex- “The ? eet’s operating tempo has not slowed down, so we ercise is being conducted as an at-sea-only event in light of can’t slow down,” Guerts said. COVID-19 concerns. The exercise was planned to conduct a 44 Maritime Reporter & Engineering News • September 2020