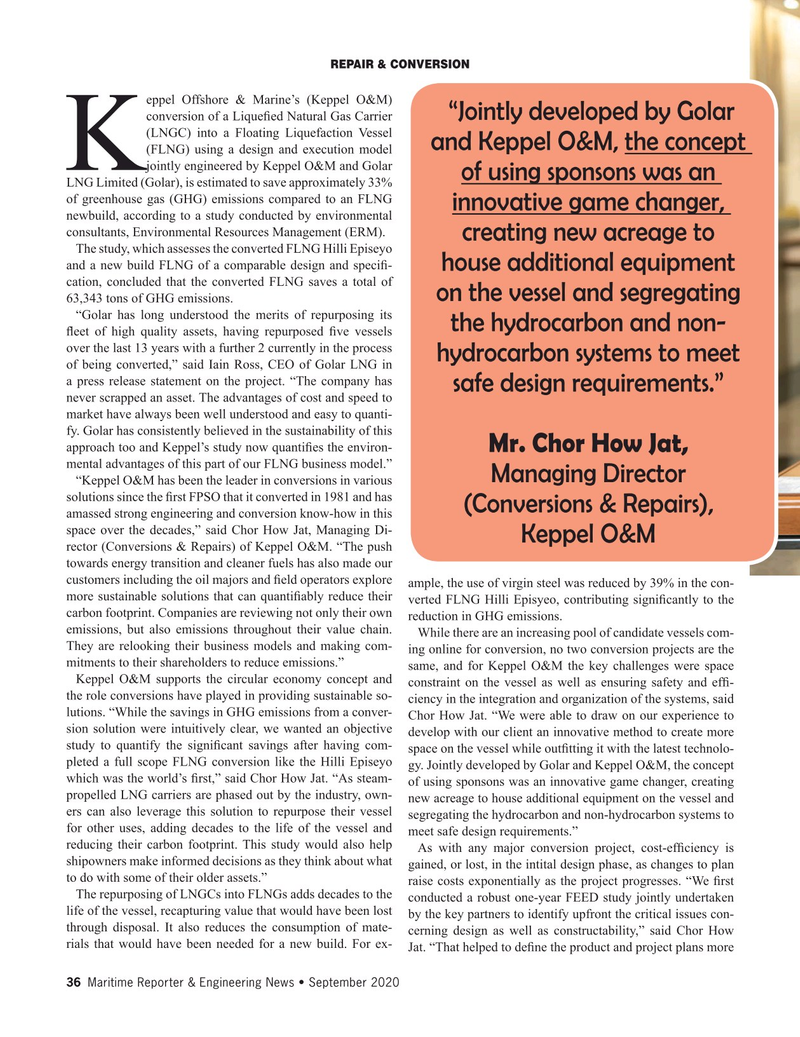 The study, which assesses the converted FLNG Hilli Episeyo and a new build FLNG of a comparable design and speci? - house additional equipment cation, concluded that the converted FLNG saves a total of on the vessel and segregating 63,343 tons of GHG emissions. “Golar has long understood the merits of repurposing its the hydrocarbon and non- ? eet of high quality assets, having repurposed ? ve vessels over the last 13 years with a further 2 currently in the process hydrocarbon systems to meet of being converted,” said Iain Ross, CEO of Golar LNG in a press release statement on the project. “The company has safe design requirements.” never scrapped an asset. The advantages of cost and speed to market have always been well understood and easy to quanti- fy. Golar has consistently believed in the sustainability of this approach too and Keppel’s study now quanti? es the environ-

Mr. Chor How Jat, mental advantages of this part of our FLNG business model.”

Managing Director “Keppel O&M has been the leader in conversions in various solutions since the ? rst FPSO that it converted in 1981 and has (Conversions & Repairs), amassed strong engineering and conversion know-how in this space over the decades,” said Chor How Jat, Managing Di-

Keppel O&M rector (Conversions & Repairs) of Keppel O&M. “The push towards energy transition and cleaner fuels has also made our customers including the oil majors and ? eld operators explore ample, the use of virgin steel was reduced by 39% in the con- more sustainable solutions that can quanti? ably reduce their verted FLNG Hilli Episyeo, contributing signi? cantly to the carbon footprint. Companies are reviewing not only their own reduction in GHG emissions.

emissions, but also emissions throughout their value chain.

While there are an increasing pool of candidate vessels com-

They are relooking their business models and making com- ing online for conversion, no two conversion projects are the mitments to their shareholders to reduce emissions.” same, and for Keppel O&M the key challenges were space

Keppel O&M supports the circular economy concept and constraint on the vessel as well as ensuring safety and ef? - the role conversions have played in providing sustainable so- ciency in the integration and organization of the systems, said lutions. “While the savings in GHG emissions from a conver-

Chor How Jat. “We were able to draw on our experience to sion solution were intuitively clear, we wanted an objective develop with our client an innovative method to create more study to quantify the signi? cant savings after having com- space on the vessel while out? tting it with the latest technolo- pleted a full scope FLNG conversion like the Hilli Episeyo gy. Jointly developed by Golar and Keppel O&M, the concept which was the world’s ? rst,” said Chor How Jat. “As steam- of using sponsons was an innovative game changer, creating propelled LNG carriers are phased out by the industry, own- new acreage to house additional equipment on the vessel and ers can also leverage this solution to repurpose their vessel segregating the hydrocarbon and non-hydrocarbon systems to for other uses, adding decades to the life of the vessel and meet safe design requirements.” reducing their carbon footprint. This study would also help

As with any major conversion project, cost-ef? ciency is shipowners make informed decisions as they think about what gained, or lost, in the intital design phase, as changes to plan to do with some of their older assets.” raise costs exponentially as the project progresses. “We ? rst

The repurposing of LNGCs into FLNGs adds decades to the conducted a robust one-year FEED study jointly undertaken life of the vessel, recapturing value that would have been lost by the key partners to identify upfront the critical issues con- through disposal. It also reduces the consumption of mate- cerning design as well as constructability,” said Chor How rials that would have been needed for a new build. For ex-