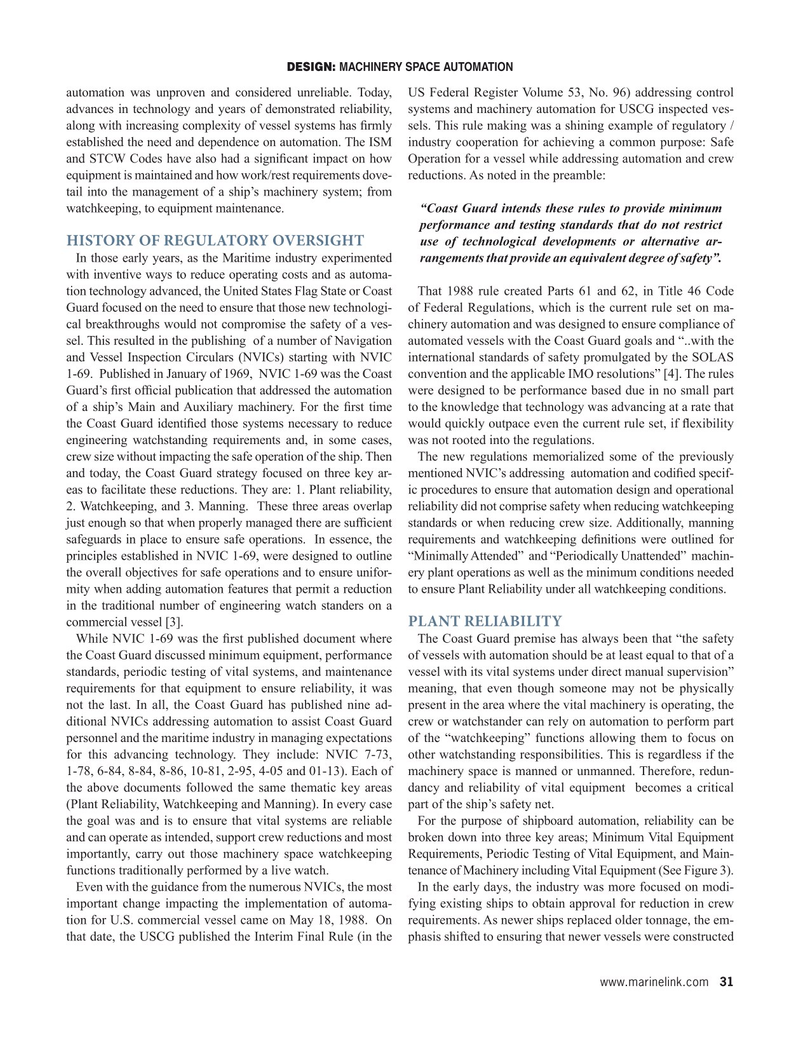 DESIGN: MACHINERY SPACE AUTOMATION automation was unproven and considered unreliable. Today, US Federal Register Volume 53, No. 96) addressing control advances in technology and years of demonstrated reliability, systems and machinery automation for USCG inspected ves- along with increasing complexity of vessel systems has ? rmly sels. This rule making was a shining example of regulatory / established the need and dependence on automation. The ISM industry cooperation for achieving a common purpose: Safe and STCW Codes have also had a signi? cant impact on how Operation for a vessel while addressing automation and crew equipment is maintained and how work/rest requirements dove- reductions. As noted in the preamble: tail into the management of a ship’s machinery system; from watchkeeping, to equipment maintenance. “Coast Guard intends these rules to provide minimum performance and testing standards that do not restrict

HISTORY OF REGULATORY OVERSIGHT use of technological developments or alternative ar-

In those early years, as the Maritime industry experimented rangements that provide an equivalent degree of safety”.

with inventive ways to reduce operating costs and as automa- tion technology advanced, the United States Flag State or Coast That 1988 rule created Parts 61 and 62, in Title 46 Code

Guard focused on the need to ensure that those new technologi- of Federal Regulations, which is the current rule set on ma- cal breakthroughs would not compromise the safety of a ves- chinery automation and was designed to ensure compliance of sel. This resulted in the publishing of a number of Navigation automated vessels with the Coast Guard goals and “..with the and Vessel Inspection Circulars (NVICs) starting with NVIC international standards of safety promulgated by the SOLAS 1-69. Published in January of 1969, NVIC 1-69 was the Coast convention and the applicable IMO resolutions” [4]. The rules

Guard’s ? rst of? cial publication that addressed the automation were designed to be performance based due in no small part of a ship’s Main and Auxiliary machinery. For the ? rst time to the knowledge that technology was advancing at a rate that the Coast Guard identi? ed those systems necessary to reduce would quickly outpace even the current rule set, if ? exibility engineering watchstanding requirements and, in some cases, was not rooted into the regulations.

crew size without impacting the safe operation of the ship. Then The new regulations memorialized some of the previously and today, the Coast Guard strategy focused on three key ar- mentioned NVIC’s addressing automation and codi? ed specif- eas to facilitate these reductions. They are: 1. Plant reliability, ic procedures to ensure that automation design and operational 2. Watchkeeping, and 3. Manning. These three areas overlap reliability did not comprise safety when reducing watchkeeping just enough so that when properly managed there are suf? cient standards or when reducing crew size. Additionally, manning safeguards in place to ensure safe operations. In essence, the requirements and watchkeeping de? nitions were outlined for principles established in NVIC 1-69, were designed to outline “Minimally Attended” and “Periodically Unattended” machin- the overall objectives for safe operations and to ensure unifor- ery plant operations as well as the minimum conditions needed mity when adding automation features that permit a reduction to ensure Plant Reliability under all watchkeeping conditions. in the traditional number of engineering watch standers on a commercial vessel [3].

While NVIC 1-69 was the ? rst published document where The Coast Guard premise has always been that “the safety the Coast Guard discussed minimum equipment, performance of vessels with automation should be at least equal to that of a standards, periodic testing of vital systems, and maintenance vessel with its vital systems under direct manual supervision” requirements for that equipment to ensure reliability, it was meaning, that even though someone may not be physically not the last. In all, the Coast Guard has published nine ad- present in the area where the vital machinery is operating, the ditional NVICs addressing automation to assist Coast Guard crew or watchstander can rely on automation to perform part personnel and the maritime industry in managing expectations of the “watchkeeping” functions allowing them to focus on for this advancing technology. They include: NVIC 7-73, other watchstanding responsibilities. This is regardless if the 1-78, 6-84, 8-84, 8-86, 10-81, 2-95, 4-05 and 01-13). Each of machinery space is manned or unmanned. Therefore, redun- the above documents followed the same thematic key areas dancy and reliability of vital equipment becomes a critical (Plant Reliability, Watchkeeping and Manning). In every case part of the ship’s safety net. the goal was and is to ensure that vital systems are reliable For the purpose of shipboard automation, reliability can be and can operate as intended, support crew reductions and most broken down into three key areas; Minimum Vital Equipment importantly, carry out those machinery space watchkeeping Requirements, Periodic Testing of Vital Equipment, and Main- functions traditionally performed by a live watch. tenance of Machinery including Vital Equipment (See Figure 3).

Even with the guidance from the numerous NVICs, the most In the early days, the industry was more focused on modi- important change impacting the implementation of automa- fying existing ships to obtain approval for reduction in crew tion for U.S. commercial vessel came on May 18, 1988. On requirements. As newer ships replaced older tonnage, the em- that date, the USCG published the Interim Final Rule (in the phasis shifted to ensuring that newer vessels were constructed www.marinelink.com 31