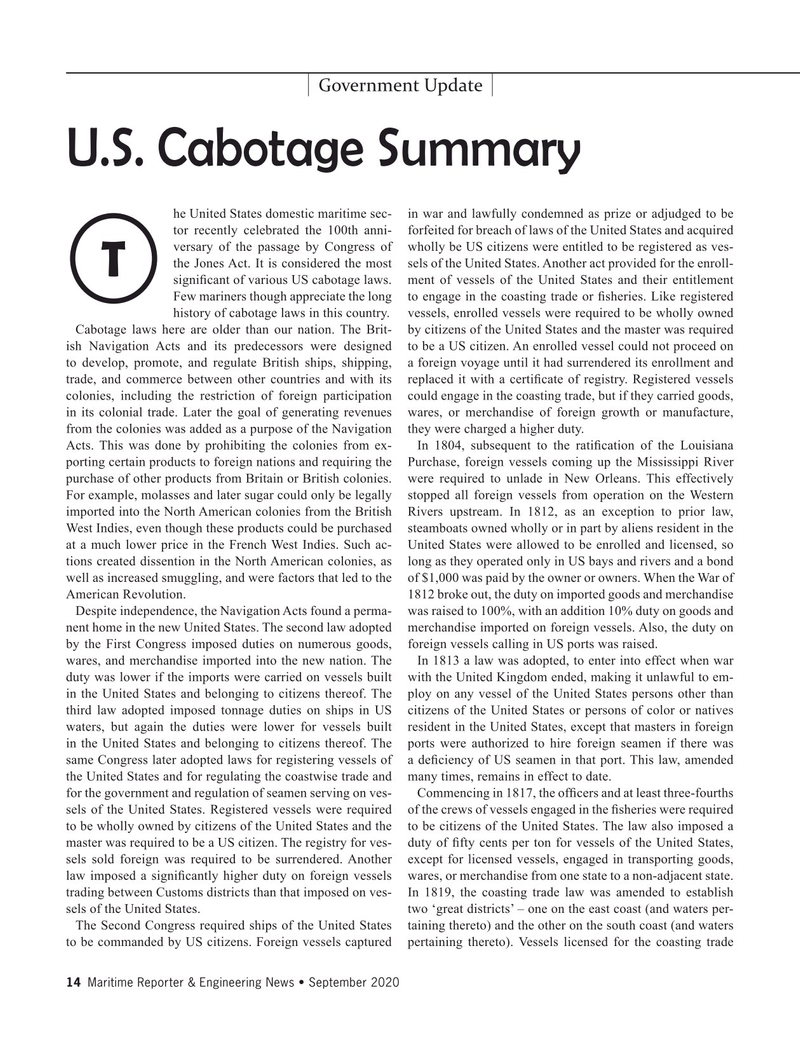 U.S. Cabotage Summary he United States domestic maritime sec- in war and lawfully condemned as prize or adjudged to be tor recently celebrated the 100th anni- forfeited for breach of laws of the United States and acquired versary of the passage by Congress of wholly be US citizens were entitled to be registered as ves- the Jones Act. It is considered the most sels of the United States. Another act provided for the enroll-

T signi? cant of various US cabotage laws. ment of vessels of the United States and their entitlement

Few mariners though appreciate the long to engage in the coasting trade or ? sheries. Like registered history of cabotage laws in this country. vessels, enrolled vessels were required to be wholly owned

Cabotage laws here are older than our nation. The Brit- by citizens of the United States and the master was required ish Navigation Acts and its predecessors were designed to be a US citizen. An enrolled vessel could not proceed on to develop, promote, and regulate British ships, shipping, a foreign voyage until it had surrendered its enrollment and trade, and commerce between other countries and with its replaced it with a certi? cate of registry. Registered vessels colonies, including the restriction of foreign participation could engage in the coasting trade, but if they carried goods, in its colonial trade. Later the goal of generating revenues wares, or merchandise of foreign growth or manufacture, from the colonies was added as a purpose of the Navigation they were charged a higher duty.

Acts. This was done by prohibiting the colonies from ex- In 1804, subsequent to the rati? cation of the Louisiana porting certain products to foreign nations and requiring the Purchase, foreign vessels coming up the Mississippi River purchase of other products from Britain or British colonies. were required to unlade in New Orleans. This effectively

For example, molasses and later sugar could only be legally stopped all foreign vessels from operation on the Western imported into the North American colonies from the British Rivers upstream. In 1812, as an exception to prior law,

West Indies, even though these products could be purchased steamboats owned wholly or in part by aliens resident in the at a much lower price in the French West Indies. Such ac- United States were allowed to be enrolled and licensed, so tions created dissention in the North American colonies, as long as they operated only in US bays and rivers and a bond well as increased smuggling, and were factors that led to the of $1,000 was paid by the owner or owners. When the War of

American Revolution. 1812 broke out, the duty on imported goods and merchandise

The Second Congress required ships of the United States taining thereto) and the other on the south coast (and waters to be commanded by US citizens. Foreign vessels captured pertaining thereto). Vessels licensed for the coasting trade 14 Maritime Reporter & Engineering News • September 2020