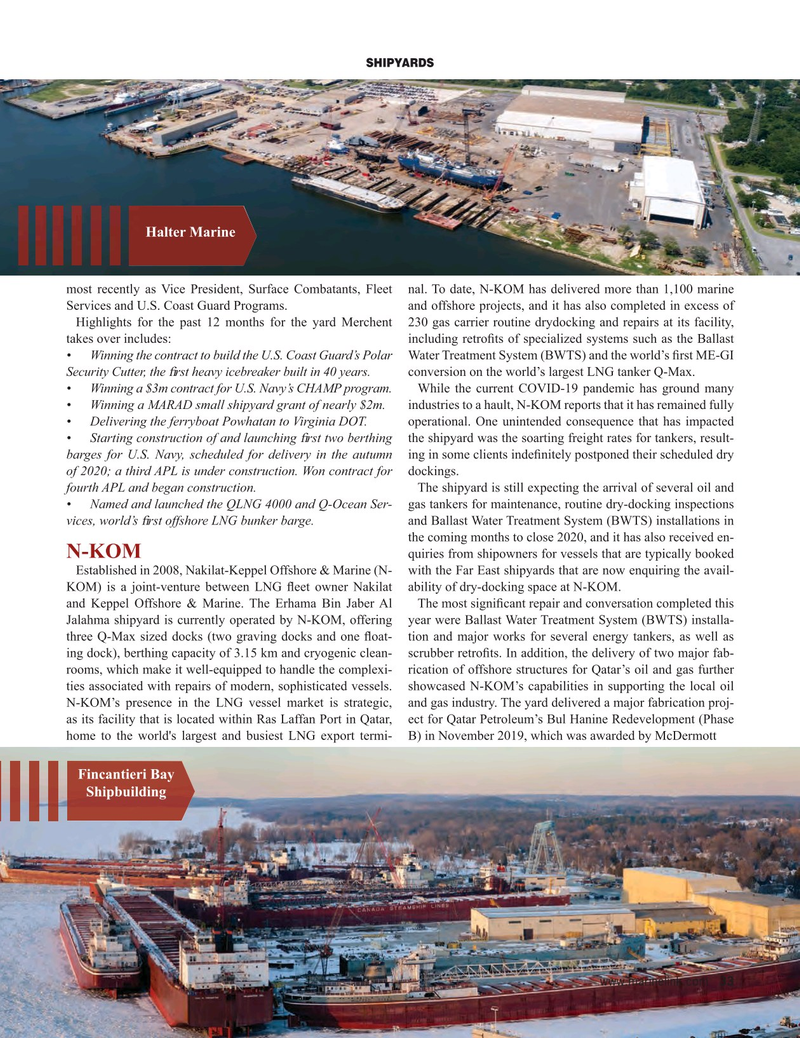 Services and U.S. Coast Guard Programs. and offshore projects, and it has also completed in excess of

Highlights for the past 12 months for the yard Merchent 230 gas carrier routine drydocking and repairs at its facility, takes over includes: including retro? ts of specialized systems such as the Ballast • Winning the contract to build the U.S. Coast Guard’s Polar Water Treatment System (BWTS) and the world’s ? rst ME-GI

Security Cutter, the ? rst heavy icebreaker built in 40 years. conversion on the world’s largest LNG tanker Q-Max. • Winning a $3m contract for U.S. Navy’s CHAMP program. While the current COVID-19 pandemic has ground many • Winning a MARAD small shipyard grant of nearly $2m. industries to a hault, N-KOM reports that it has remained fully • Delivering the ferryboat Powhatan to Virginia DOT. operational. One unintended consequence that has impacted • Starting construction of and launching ? rst two berthing the shipyard was the soarting freight rates for tankers, result- barges for U.S. Navy, scheduled for delivery in the autumn ing in some clients inde? nitely postponed their scheduled dry of 2020; a third APL is under construction. Won contract for dockings.

N-KOM quiries from shipowners for vessels that are typically booked

Established in 2008, Nakilat-Keppel Offshore & Marine (N- with the Far East shipyards that are now enquiring the avail-

KOM) is a joint-venture between LNG ? eet owner Nakilat ability of dry-docking space at N-KOM.

and Keppel Offshore & Marine. The Erhama Bin Jaber Al The most signi? cant repair and conversation completed this

N-KOM’s presence in the LNG vessel market is strategic, and gas industry. The yard delivered a major fabrication proj- as its facility that is located within Ras Laffan Port in Qatar, ect for Qatar Petroleum’s Bul Hanine Redevelopment (Phase home to the world's largest and busiest LNG export termi- B) in November 2019, which was awarded by McDermott