The town of Sibu developed its vibrant fast ferry building tradition in the decades after World War II. But it is only more recently that the vessels' fame and their designs have grown to the point that the little town on Sarawak's Rejan River is supplying fast ferries for much of southeast Asia.

Most of the ferries that ply the rivers of the area are single engined. Many of those that have been supplied to China.

Cambodia, Vietnam, Thailand and Indonesia are larger twin engine versions of the same trim "banana" boat style. Notable for their exaggerated rake and strong bow flare, the narrow craft are equally adept at handling the narrow confines of river travel and the long swells of the South China sea.

A highly respected leader in the design of these ferries is Paul Wong's naval architect firm Wong Shipbuilding Contractor and Designer. Largely selftaught, Paul rowed a river craft to school for many years and so learned the dynamics of propulsion on the end of a pair of oars. Today, still in his midfifties, Paul is working with his son who has completed a degree in naval architecture in Taiwan. The firm continues to design larger fast ferries built to class for the export market. One of their latest projects trades the pair of oars for a pair of Cummins KTA50 M2 main engines supplied by Scott & English (Malaysia).

Named Wessam Express 6 the craft, which was delivered in July this year, has a steel hull and a double decked aluminum superstructure with capacity for 228 passengers and seven crew. With a molded depth of 8.2 ft. (2.5 m) the vessel has a designed draft of only 4.8 ft.

(1.45 m) allowing it to operate in a variety of shallow harbors.

In addition to being the first Sibu shipyard to achieve Lloyd's IS09001 certification.

the Yong Choo Kui Shipyard was one of the first yards in Sibu to offer aluminum construction. Like Paul Wong, Mr. Yong had humble beginnings, but like Mr. Wong, he has not only built a significant career he continues to be noted for innovation and progressive thinking. As the shipyard's promotion video points out, the Malaysian skies of full of aircraft form the EU and the US. her highways are full of cars from Japan, but the seas, not only of Malaysia, but of much of the world, are filling with the water craft from Sarawak.

For more information from Cummins Circle 48 on Reader Service Card 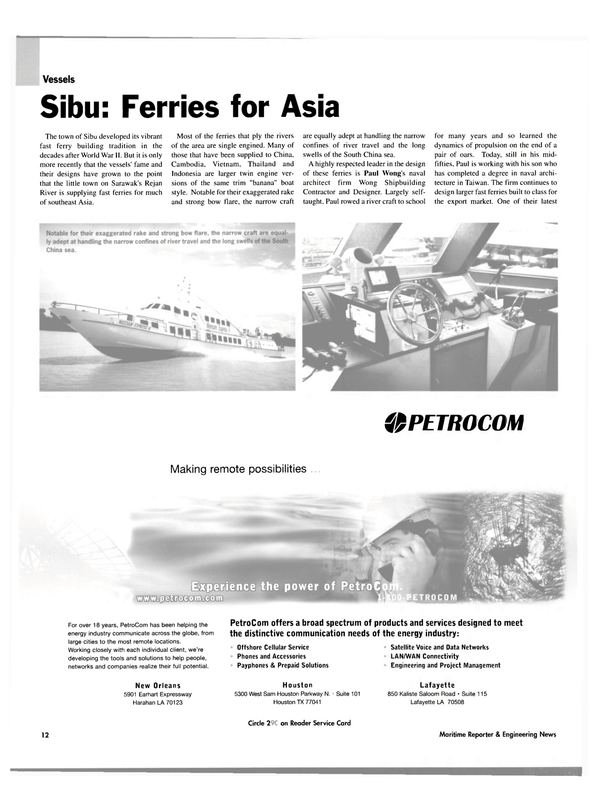