The Southeastern New England Shipbuilding Corporation (SENESCO) has capped years of progress and strong growth with a change in name and investment in the future. The company formally changed its name to Senesco Marine, and to prove that the metamorphosis is much more than skin-deep, has instituted a sweeping new design and build process to enhance the speed with which the company can design, build and deliver barges.

New CEO Gary C. Schuler said "Our most recent double hulled barge was built for a west coast customer and we continue to see increased activity out of our New Orleans office. The change to Senesco Marine makes sense for us based on our growing reputation as a leading national shipbuilder." Schuler touted the company's new partnership with Guarino & Cox, a respected naval architecture firms.

"We realize that expedited construction and on time delivery have become increasingly important as our customers move to comply with federal requirements for double hulled barges," said Schuler. "On time delivery starts with quality ship designs and we're pleased to have Guarino & Cox as strategic design partners. Not only is Guarino & Cox providing us with top notch designs, but they're designing to maximize efficiency and speed up construction time based on the operation of our shipyard." Greg Cox, a principal in Guarino & Cox, said he was pleased to be working with Senesco Marine on the design of the company's double-hulled barges. "As a relatively new company, Senesco Marine has developed a tremendous reputation as one of the leading barge builders in America," said Cox. "We're honored to be working with them as a design partner in their new on time design, build and delivery process." In addition to its strategic partnership with Guarino & Cox, Schuler said the company has taken a number of other key steps at the shipyard to make the new on time design, build and delivery process a reality.

Another 80,000-Barrel, Double-Hulled Barge Contract Senesco Marine signed a second contract with Fall River, Mass.-based Sea Boats, Inc. to build a 80,000-barrel, double- hulled barge. Construction will be complete by April of 2004. Earlier this year, Sea Boats launched Tennessee, its first 80,000-barrel, double-hulled barge built by Senesco Marine. Sea Boats then needed another such barge built, and fast. "Because of new Federal guidelines, our customers must replace their single-hulled barges with double-hulled vessels," explained Schuler. "In many cases, the new barges must be in place by 2005. To accommodate our customers, we've maximized our production capacity by implementing a new, on-time design, build, and deliver process." Don Church, an executive with the company, said. "The people at Senesco Marine are not only great to work with, they're exceptionally talented.

So our decision to return to them ...

was an easy one." For more information on Senesco Marine Circle 28 on Reader Service Card 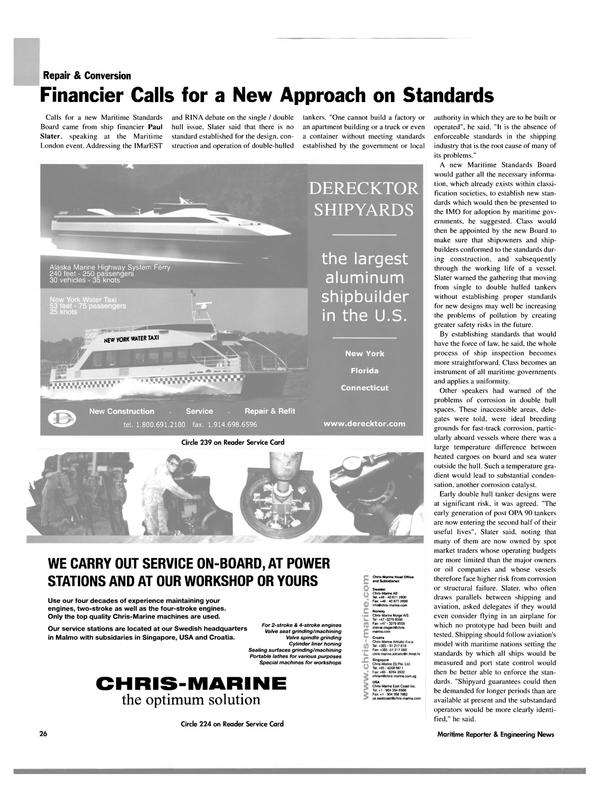