Integrity in a New Era

As the first containerships officially credited with capacities topping 8,000-TEU. the series of newbuilds ordered at the start of the year by Vancouver-based Seaspan for long-term charter to China Shipping Group embodies a design, which has been the subject of the most thorough structural analysis.

The boxship sector has always been characterized by a propensity for driving developments to the limits of technical possibility. Its outstanding structural safety record over the years is testament to the industry's unflagging efforts to ensure long-term vessel integrity in combination with advancing scale.

The considered technical approach expressed in current projects in the 8,000-9,000-TEU category, the focus of a major investment drive by the industry this year, demonstrates that the nascent generation of linehaul vessels represents more than an extrapolation of design and engineering systems proven at a smaller unit scale.

The five 8,100-TEU post-Panamax vessels contracted by Seaspan from Samsung Heavy Industries, will rank among the largest containerships ever to have been built in Asia. It is understood that two of the newbuildings have since been sold to Danaos Shipping of Greece, and that one of the series will now be owned outright by China Shipping Group. Seaspan, part of the Washington Marine Group, was also linked with earlier studies at Samsung into a 9,200-TEU vessel design, in a project involving a European operator.

Powered and formed for a laden speed just under 26- knots, the 8,100-TEU design has been dimensioned for 19 forty-foot bays in the hold and 20 above deck, with the weatherdeck stow encompassing 17 stacks across in a maximum of seven tiers.

A lashing bridge arrangement is to be adopted in the interests of improved cargo security and turnaround time, while the hatch covers have been specified with four panels instead of the usual three to promote con- taine r - h a n - dling flexibility.

Shipment scope will be enhanced by provision for up to 700-FEU integral, aircooled type refrigerated boxes.

Lloyd's Register has undertaken a comprehensive structural analysis of the vessel type as part of the plan approval process from the society's Busan office in South Korea. It takes the view that a robust and proven structural analysis methodology is crucial with ships of this size. The extensive list of class descriptions under which the new series will be built include the ShipRight notations SDA(structural design assessment), FDA(fatigue design assessment), and CM(condition monitoring).

The primary structure has been assessed using a full ship model created by Samsung and analyzed by LR.

Fine mesh models of the critical hatch coaming and upper deck details have been investigated. The aft end of the hatch coaming has been tapered into the upper deck instead of connected to the front of the deck house, as is common on containerships, in a bid to ensure superior fatigue performance. The primary structure of the fore part of the ship has been reinforced following a bow plunging analysis carried out by LR, and out of consideration of the high loads imposed when large, fast containerships are driven through heavy seas. As studies have indicated the susceptibility of such vessels to stern slamming when operating at reduced speeds, the 8,100-TEU type also incorporates strengthening of the stern.

Given the very substantial breadth, transverse strength has commanded greater attention than that typically required for Panamax vessels. Large angles of roll have been examined as part of the structural analysis, and some additional reinforcement was deemed necessary.

The manner in which the design process has been managed is an evolution of previous projects. All design comments have been exchanged between LR, Seaspan and Samsung by e-mail, and the classification body reports that a commitment to transparency by all parties has enabled design issues to be quickly identified and resolved. Such an approach is pertinent to the development of even larger containerships under design by the South Korean builder. 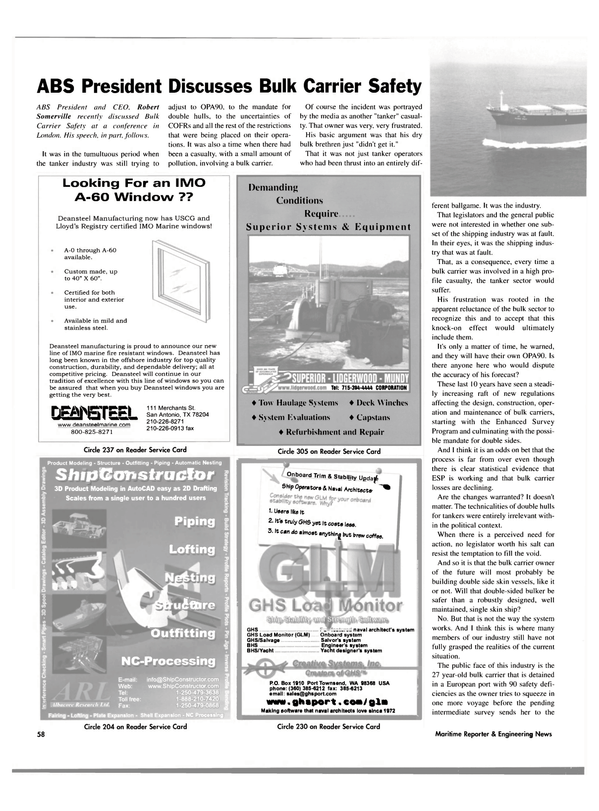 Read Integrity in a New Era in Pdf, Flash or Html5 edition of October 2003 Maritime Reporter