UMC International Pic recently supported the British Ministry of Defense (MoD) to successfully complete the afloat replacement of a 7.5-ton Voith Schneider Propulsor (VSP) unit, while the Royal Navy ship was operating over 3,000 miles from its UK base port. The VSP waterborne exchange is, reported by the MoD, to be a premiere culmination of efforts by UMC, on behalf of the MoD, to establish comprehensive waterborne maintenance support for the VSP. The VSP now joins the growing list of ship equipments that UMC can inspect, maintain and repair, afloat without the need to dry dock. UMC has designed and developed the system to replace VSP units in conjunction with the Mine Countermeasures Vessels Integrated Project Team (MCMVIPT) of the MoD's Warship Support Agency.

The MCMV IPT identified that not all "Ports of Call" had the facilities or resources to change a Voith- Schneider Propulsion (VSP) unit should a breakdown occur. The development process began with UMC being tasked to undertake a study, which confirmed that it was feasible to design and build a cofferdam to replace VSP units afloat that could be airlifted anywhere in the world. This was followed by a contract to design, manufacture and supply a portable cofferdam system along with procedures for installation removal and maintenance. The cofferdam, lifting frame (to sit on the deck above the propeller room) and dockside support frame (to hold the VSP once removed from the ship) were promptly delivered to Portsmouth Naval Dockyard for a trial. During the trial, all elements of the replacement procedures were proven, and on completion of the trial the system was declared fully operational.

Almost immediately it was called into service and flown overseas to a Royal Navy forward support unit, which had been deployed to support a Royal Navy task force. Shortly after the equipment had been deployed a warship reported a requirement to exchange one of its VSP units. The options were to remain on task and run the risk of the VSP unit failing, a costly and time consuming departure away from its operating area to find a suitable dry-dock or to use the cofferdam system provided by UMC. It was decided that the costeffective option was to use the cofferdam, as to avoid the immediate risks of continued use of the VSP.

Having been given the go ahead, preparations for the replacement task began on a Friday morning with a combined UMC, MoD, RN and Vosper Thornycroft team set to work. The following Monday afternoon, the VSP unit had been replaced and the ship was ready for its basin trial, at which time the ship sailed with a fully serviceable VSP unit. 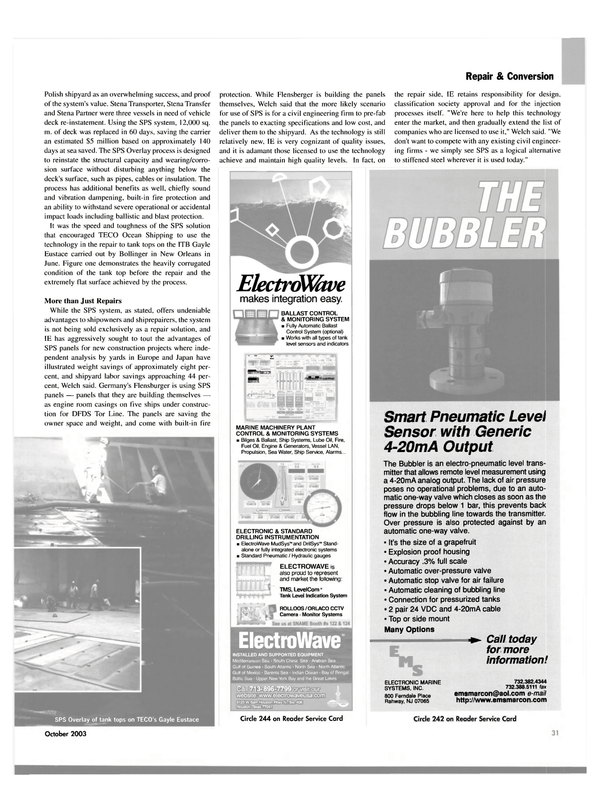