The Evolution of Marine Painting

Evolution is an interesting word. The Dictionary defines it as "an ongoing process of development". While the term is most closely associated with Human development, it also applies equally well to manufacturing and technology.

When compared to older methods, the newer technologies offer levels of efficiency and predictability that were previously unattainable. This is due, in large part to the increased use of automation and the upgrading of manual labor to a role of programmer/technician.

Ask a Shipyard Manager how this Evolution affects Production and you are likely to hear terms like " lean, increased through put, dependability and consistency" sprinkled throughout his response. Not all the areas of the Marine Industry have been evolving at the same rate, however. In the marine coatings sector, the area of coatings development has been rapidly moving from the many layered, lower solids coating systems to advanced high solids or zero solids materials that are applied in fewer passes. But, in the equally important areas of Surface Preparation and Coatings Application, the continuing dependence on labor intensive manual methods has kept these two areas of Marine Coatings from achieving the efficiency and quality that has become synonymous with Automotive production lines.

In the Automobile coatings industry, wherever it has been economically feasible and technologically possible, the worker holding the spraygun (old Labor) has been replaced with a computer controlled painting robot that is programmed and operated by trained technicians (new Labor). In layman's terms, the painter is replaced with a robot (automation) and then trained to operate it. The incorporation of advanced technologies into it's production methods has made the Auto industry a window to the future for other industries.

With automation, the company benefits from the speed, dependability, improved consistency and reduced labor costs possible with computer controlled robotics. The coatings worker moves away from direct exposure to hazardous materials and receives valuable training in advanced technology and last but not least, the customer benefits by having his contract completed faster and with greater quality and accuracy. An example of evolutionary development in marine manufacturing is CNC Mold production for composite craft. In this process, plugs and molds for boats are designed with the aid of computers and specialty software programs and then milled to the proper shape by computer controlled robotic equipment. This well established production method delivers greater accuracy in substantially less time and makes the older practices of manual design and mold making inefficient and outdated by comparison.

Marine Coatings is poised to take a similar step forward as robotic water blasting units and computer controlled, plural component painting equipment give us a glimpse of the next step in the Evolutionary process-automated systems.

Visions East, Inc. has patented the first robotic system for preparing and painting ship surfaces. By automating the marine coatings process, labor costs are reduced, uniform quality is delivered through precision application and contracts are completed on time. 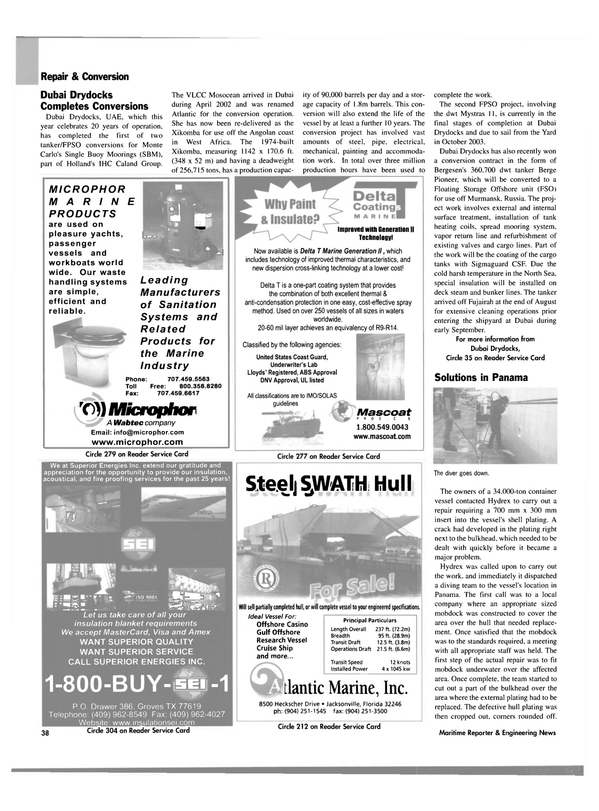 Read The Evolution of Marine Painting in Pdf, Flash or Html5 edition of October 2003 Maritime Reporter