Bristol-based Brunei Limited has developed radical new coating systems for the marine industry. The aim has been to create the most durable, efficient and environmentally friendly available.

To marry the owners' needs for hull-effi- ciency, long docking intervals, and short downtime, with those of the marine environment and the legislation designed to protect it.

Developed and produced in the U.K., the systems are constantly evolving, but are already well-proven. The system was recently applied on three Canada Maritime container vessels in Antwerp, and the same group, who operate a fiveyear docking schedule and widely use Brunei's systems, will be applying these on two further ships later this month in Lisnave, Portugal. Since its initial development with the aid of Britain's Royal Naval base at Portsmouth, applications have taken place in over 20 countries.

The product range covers decks, ramps, tanktops, tanks, hatchcovers, superstructure, leisure tracks and pools, as well as hulls above and below the waterline.

The Brunei systems rely on a tried and tested formulation, which is applied with conventional spraying equipment, of complex resins and their catalyst. The Enviromarine and Endurance product ranges are free of all metals and biocides.

They will comply well beyond 2008. and so will not be required to be removed at that time to avoid encapsulation.

Brunei's are not designed to cater for the manufacturer's normal commercial need for the ship to require re-coating at the next dry-docking, either by shedding the coating through wear, or by obsolescence through new legislation.

Indeed, the facts that the system does not "polish off", and that it is approximately four times harder than concrete, have meant that wear factors are very low, even when hulls have been breaking ice for repeated winters.

The system is applied in fewer coats, which saves considerable cost and time.

It can be re-floated in much shorter intervals after applying the final coat, since final curing will continue under water. Also, since there is no evaporation, painting and dock time are not at the mercy of the weather. Humidity is not a factor, and painting can continue in the rain. Since the coatings are 100% solids, and contain no solvents, there are no pores to nurture marine micro-organisms and to nourish marine growth on the hull. There are no attachment points for such growth and. with a coefficient of friction so low that it represents a fraction of polished steel or glass, the slightest motion of the hull helps to keep the hull efficiently clean. Inspections, including those by divers, have shown successful resistance to marine growth.

For more information from Brunei, Circle 38 on Reader Service Card 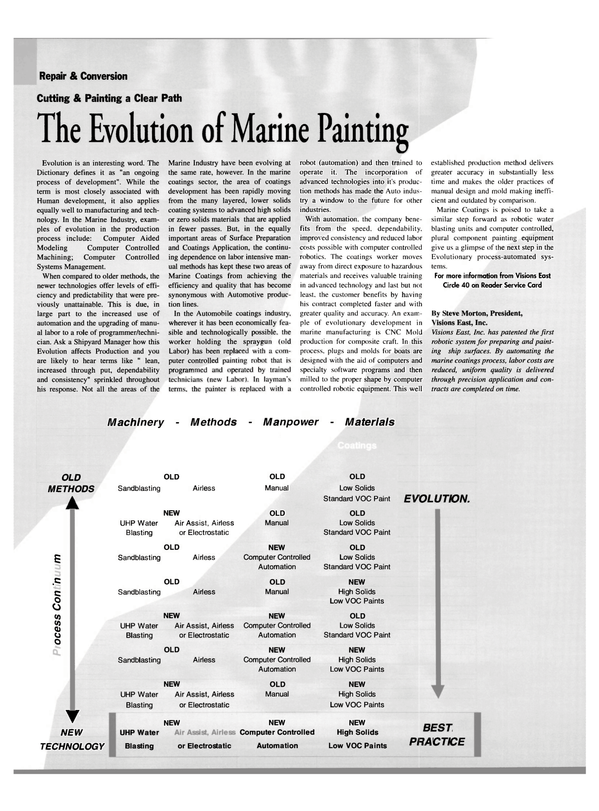