Virginia Republican Rep. Herbert Bateman, 72, a nine-term congressman and strong military supporter who planned to retire at the end the year, died in his sleep, reportedly of natural casues on Monday, September 11. according to a spokesman.

He had battled a series of health problems in recent years including lung and prostate cancer.

First elected in 1982. Congressman Bateman had dominated his heavily Republican district in the Tidewater region of Virginia. He used his seat on the House Armed Services Committee to support the military and the area's heavy concentration of defense contractors while building a moderate voting record.

Prior to joining congress. Bateman served in the Virginia Senate for 15 years, where he was recognized for his leadership and committee work in areas focusing on agriculture, energy, education and the budget.

The congressman was noted for his steadfast knowledge and experience in dealing with the various challenges that are constantly faced by the U.S. shipbuilding industry today.

An avid supporter of U.S. shipbuilding, both on the Naval and commercial fronts, the Congressman once cited Title XI as "a crucial move for shipowners to secure commercial financing." He successfully supported the authorization and funding for the construction of three Nimitz-class aircraft carriers, most recently the U.S.S. Ronald Reagan.

which is now under construction at Newport News Shipbuilding. In addition, he has secured funding for the first four Virginia-Class new attack submarines and 12 Los Angeles-Class submarines.

This past June. Congressman Bateman was honored by the American Shipbuilding Association (ASA) with an award named in his honor. Established as The Herbert H. Bateman Award, it will be given to a Member of Congress, Administration official, or industry leader who exemplifies the Congressman's years of consistent leadership in strenghtening America's shipbuilding industry.

Born in Elizabeth City, N.C. Bateman planted his Virginan roots at an early age and graduated from Newport News High School. He received his B.A. from the College of William and Mary in 1949 and taught at Hampton High School from 1949-51. He enlisted in the U.S. Air Force during the Korean War and was discharged a 1st Lieutenant in 1953. Congressman Bateman earned his law degree from the Georgetown University Law Center in 1956. Following a clerkship with the United States Court of Appeals in Washington, D.C..

he joined a Newport News law firm, where he practiced for 25 years.

Beginning his career in public service as a Democrat, the Congressman later switched to the Republican Party in 1976 while serving in the Virginia Senate.

The Congressman is survived by his wife, Laura Yacobi, two children and three grandchildren. 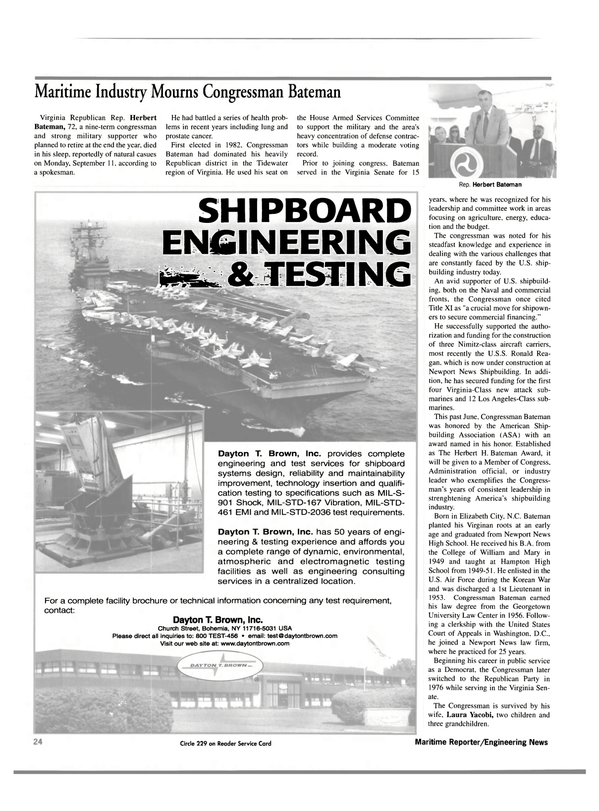