A Helping Hand In Stralsund

In Stralsund, an ocean-going giant takes to the water with the help of a record-breaking lift.

The Stralsund ship lift reportedly breaks all records, as nowhere in the world is there a lifting and lowering facility on a larger scale than this 754 x 115 ft. (230 m x 35 m) lift. Equally impressive is its power, which enables it to raise and lower a ship of up to 20,700 tons to a maximum of 36 ft. (11m) without difficulty, the Maersk Valencia in December 1999, serving as an example.

The bow of the oceangoing giant peers out of the 36 ft. (75 m) high shipyard bay, its steel hull follows: the Maersk Valencia, a 682 ft. (208 m) containership, edges slowly forward. On 432 wheels, a strange vehicle trundles along the rails like a steel centipede, at two meters a minute. It takes just three hours for the train to make its 280 m journey after which it stands on the largest ship lift in the world, waiting to be immersed.

The men in the 20-person shift routinely carry out the final tasks. Working with the ground crew, they make bow and stern fast starboard and port. The ship will be held vertical by four steel cables once it is afloat. And making sure that gets back into the water in two hour's time are the project leader and two employees of Hydraudyne Systems & Engineering (S&E), Rexroth's Dutch subsidiary. The company built the lift and is therefore responsible for the computer- controlled lowering.

To release the ship, the lift rises four centimeters to disengage the 204 twistlocks.

A few minutes later it goes down at a speed of 15 cm a minute. This time there are 12,800 tons on the lift and the transfer system, which must be immersed using the power supplied by its 100 electric servomotors, weighs 900 tons. Incidentally, the ocean giant's "taxi" consists of 54 bilge block bearers (steel girders), the chassis, 108 hydraulic motors and the HGV-size hydraulic supply unit. "As clumsy as it all looks", explained shipyard head Detlef Grigo, "this co-operative project between the Norwegian Rexroth and Hydraudyne S&E is the most modern transfer system in the world." With this mass of metal it is amazing how silently the electric servomotors, 50 on the right and 50 on the left of the dock, work.

"They are essentially modern differential pulley blocks," says engineer Hans Hozeman, the Hydraudyne manager in charge. The platform is put into operation by 100 electric servomotors (Rexroth Indramat), five-stage planetary gearing (Lohmann + Stolterfoht) and a cable pull system with winch drums and headwheels. The steel rope runs over the massive winches that are standing on firm ground close to the platform, on the left and the right. "With this technology we can control to an accuracy of one tenth of a millimeter," explains Hozeman.

Synchronization is Vital The precision of the Hydraudyne S&E system becomes obvious as the Baltic flows evenly and silently over the platform.

A synchronized performance, because all the ship lift data and control parameters are continuously reported during immersion and converted into signals by the central computer, to ensure that the lift is lowered smoothly and evenly.

"All winch signals are converted into light signals and then fed into the control center. Control PCs process this information. The result becomes visible," comments Hozeman on the synchronization efficiency. If sensors or even a motor should fail, the system switches off immediately.

The lift stops at a depth of 2.5 meters for the scheduled leak test. The integrity of hoses and seals is checked. The sink-down recommences after half-an-hour, until the ship is afloat.

The so-called "swimming out" is handled by a tug. It pulls the ocean giant slowly out of the dock. Two special HGVs on the right and left of the lift shaft move forward with the ship at the same speed. They hold under tension the two steel cables made fast on the stern. This prevents movement of the 12,800-ton vessel.

An electronic eye at the center of the stern monitors the balancing act. The ship has scarcely reached open water before three tugs tow it to the quay. The "steamer's" superstructures will be completed there and after a total of three months' construction (commencement of assembly of the ship's hull) the ship is ready for the vast freedom of the ocean.

Volkswerft Stralsund currently has 1,200 employees and its order books are full until 2001. A (230 m) ship will take to the water for the first time in Stralsund during mid-2001. 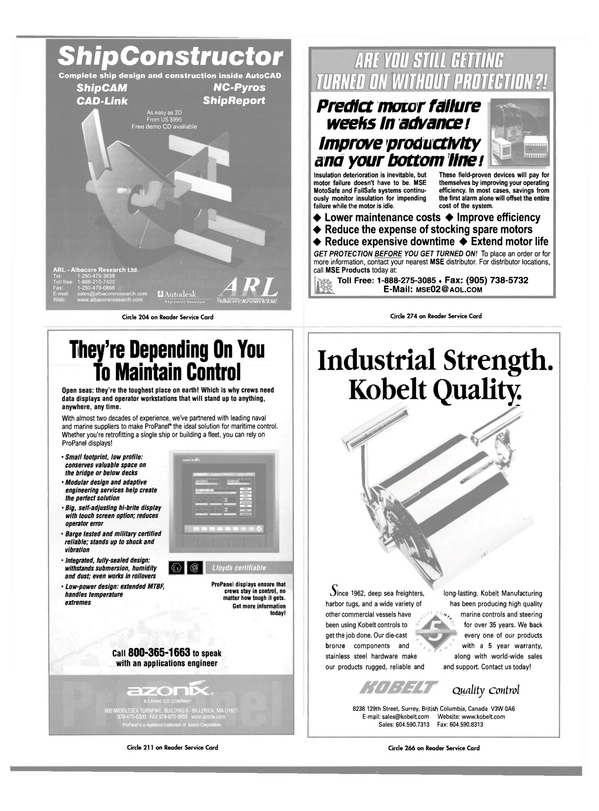 Read A Helping Hand In Stralsund in Pdf, Flash or Html5 edition of October 2000 Maritime Reporter