(SEACOR) was recently awarded four contracts by the Navy and a private shipbuilder. The contracts are for a variety of engineering design and logistics projects, and total $8.4 million.

SEACOR was awarded a $3.6- million contract for engineering and technical services for the Naval Sea Support Center, Atlantic in Philadelphia. The contract is in support of installation design for Technical Training Equipment at the Navy's training centers. The three-year effort will be performed by SEACOR's Northern Division at Cherry Hill and will include projects for hull, mechanical and electrical systems for ships.

The Naval Sea Systems Command in Washington, D.C. has awarded SEACOR a $2.2-million contract for integrated logistics support of the battleship USS Missouri at the Long Beach Naval Ship Yard. SEACOR's personnel will provide provisioning, outfitting, automated data processing, management and liaison support services to the Navy during the overhaul, mostly through the Long Beach, Calif, office with a representative in Washington.

Ingalls Shipbuilding of Pascagoula, Miss., selected SEACOR as the winner of a $1.5-million contract for design and drafting support of the overhaul and modernization of Ticonderoga class guided missile cruisers. The one-year effort will be performed by SEACOR personnel in the Pascagoula, Miss., office.

A $1.5-million pollution abatement contract was awarded to SEACOR to support the Naval Ship Systems Engineering Station in Philadelphia. Personnel from SEACOR's San Diego, Calif., office will provide system design review, inspections and technical assistance for installations onboard surface ships for the three-year term of the contract.

Systems Engineering Associates is a nationwide corporation specializing in engineering, management and program support services to the government and private industry. The corporation has headquarters in Cherry Hill, and operates nine other offices. 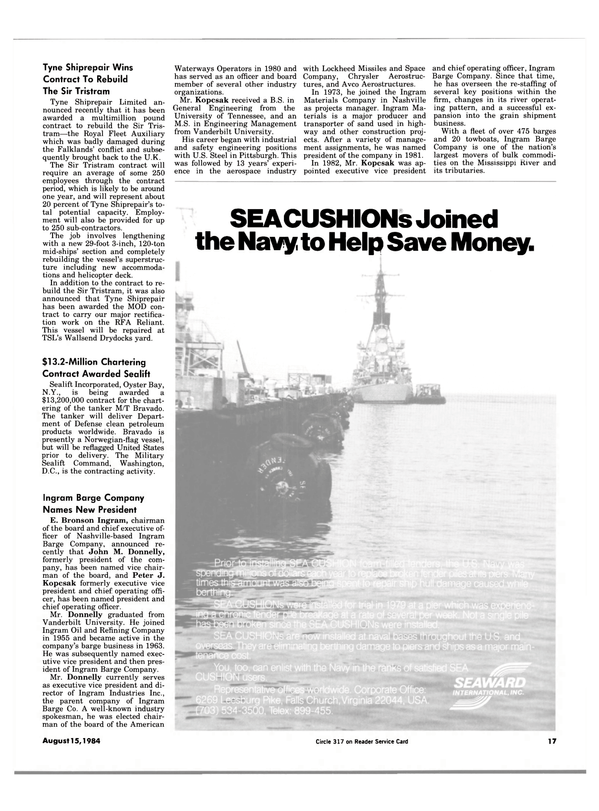