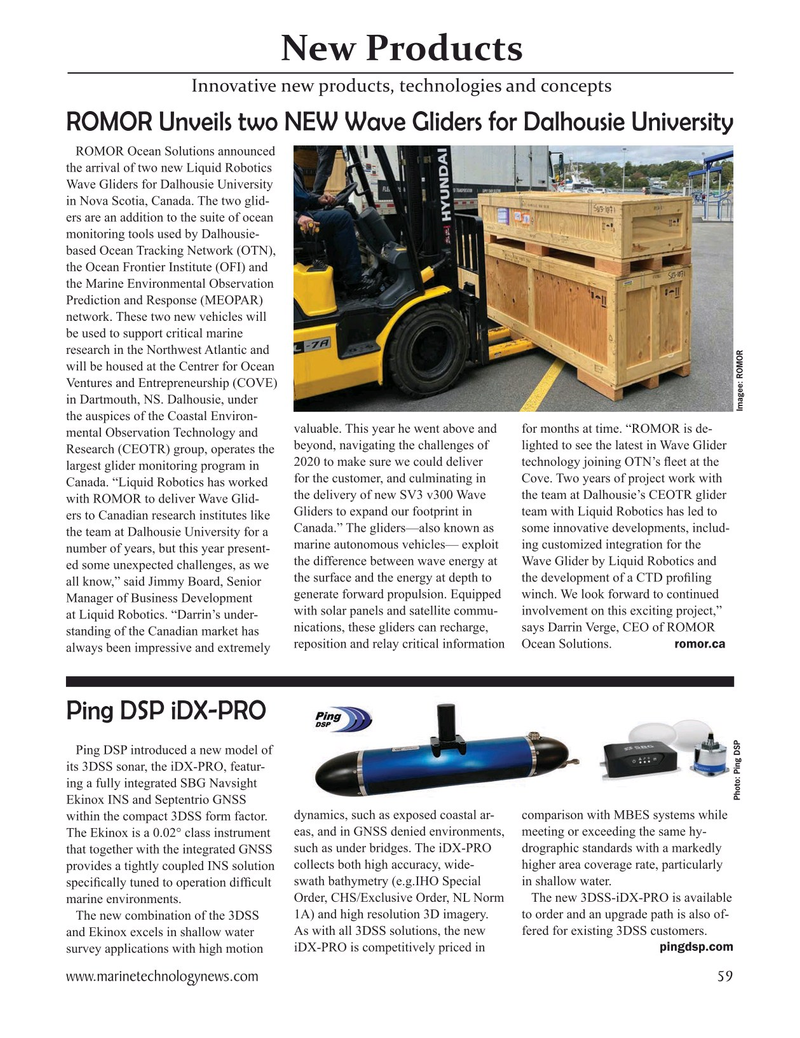 Wave Gliders for Dalhousie University in Nova Scotia, Canada. The two glid- ers are an addition to the suite of ocean monitoring tools used by Dalhousie- based Ocean Tracking Network (OTN), the Ocean Frontier Institute (OFI) and the Marine Environmental Observation

Prediction and Response (MEOPAR) network. These two new vehicles will be used to support critical marine research in the Northwest Atlantic and will be housed at the Centrer for Ocean

Ventures and Entrepreneurship (COVE) in Dartmouth, NS. Dalhousie, under

Imagee: ROMOR the auspices of the Coastal Environ- valuable. This year he went above and for months at time. “ROMOR is de- mental Observation Technology and beyond, navigating the challenges of lighted to see the latest in Wave Glider

Research (CEOTR) group, operates the 2020 to make sure we could deliver technology joining OTN’s ? eet at the largest glider monitoring program in for the customer, and culminating in Cove. Two years of project work with

Canada.” The gliders—also known as some innovative developments, includ- the team at Dalhousie University for a marine autonomous vehicles— exploit ing customized integration for the number of years, but this year present- the difference between wave energy at Wave Glider by Liquid Robotics and ed some unexpected challenges, as we the surface and the energy at depth to the development of a CTD pro? ling all know,” said Jimmy Board, Senior generate forward propulsion. Equipped winch. We look forward to continued

Manager of Business Development with solar panels and satellite commu- involvement on this exciting project,” at Liquid Robotics. “Darrin’s under- nications, these gliders can recharge, says Darrin Verge, CEO of ROMOR standing of the Canadian market has reposition and relay critical information Ocean Solutions. romor.ca always been impressive and extremely

Ekinox INS and Septentrio GNSS within the compact 3DSS form factor. dynamics, such as exposed coastal ar- comparison with MBES systems while

The new combination of the 3DSS 1A) and high resolution 3D imagery. to order and an upgrade path is also of- and Ekinox excels in shallow water As with all 3DSS solutions, the new fered for existing 3DSS customers. survey applications with high motion iDX-PRO is competitively priced in pingdsp.com www.marinetechnologynews.com 59