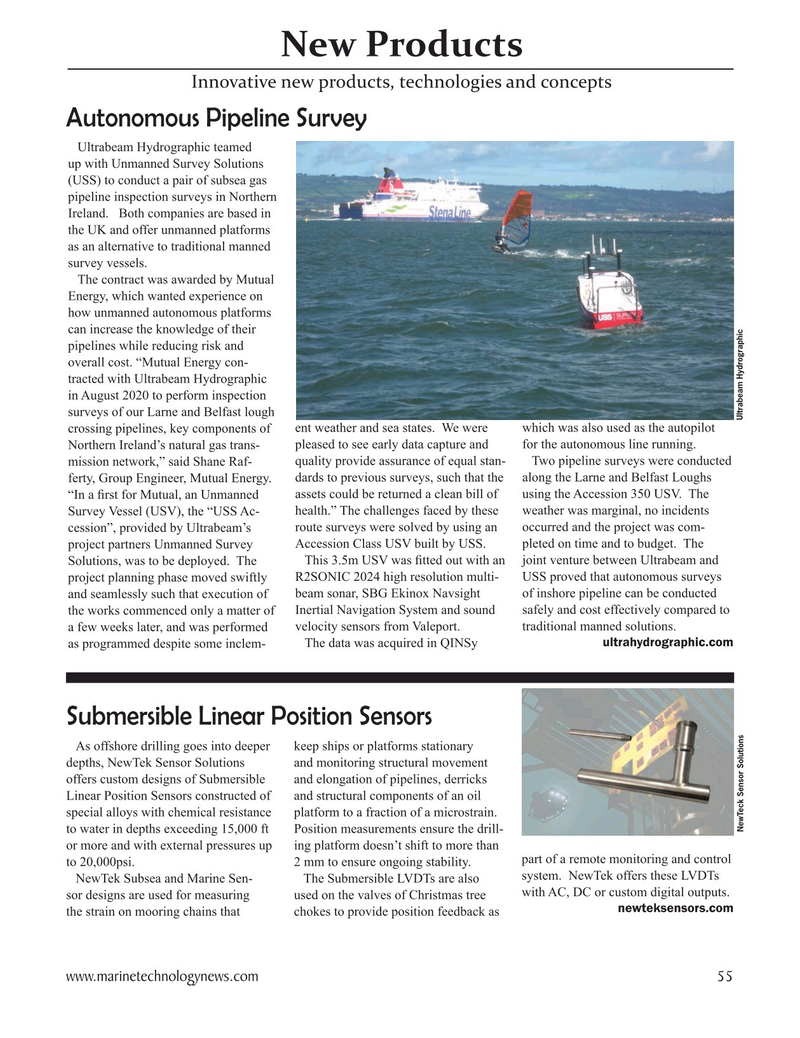 Ireland. Both companies are based in the UK and offer unmanned platforms as an alternative to traditional manned survey vessels.

The contract was awarded by Mutual

Energy, which wanted experience on how unmanned autonomous platforms can increase the knowledge of their pipelines while reducing risk and overall cost. “Mutual Energy con- tracted with Ultrabeam Hydrographic in August 2020 to perform inspection surveys of our Larne and Belfast lough crossing pipelines, key components of ent weather and sea states. We were which was also used as the autopilot

Northern Ireland’s natural gas trans- pleased to see early data capture and for the autonomous line running. mission network,” said Shane Raf- quality provide assurance of equal stan- Two pipeline surveys were conducted ferty, Group Engineer, Mutual Energy. dards to previous surveys, such that the along the Larne and Belfast Loughs “In a ? rst for Mutual, an Unmanned assets could be returned a clean bill of using the Accession 350 USV. The

Survey Vessel (USV), the “USS Ac- health.” The challenges faced by these weather was marginal, no incidents cession”, provided by Ultrabeam’s route surveys were solved by using an occurred and the project was com- project partners Unmanned Survey Accession Class USV built by USS. pleted on time and to budget. The

Solutions, was to be deployed. The This 3.5m USV was ? tted out with an joint venture between Ultrabeam and project planning phase moved swiftly R2SONIC 2024 high resolution multi- USS proved that autonomous surveys and seamlessly such that execution of beam sonar, SBG Ekinox Navsight of inshore pipeline can be conducted the works commenced only a matter of Inertial Navigation System and sound safely and cost effectively compared to a few weeks later, and was performed velocity sensors from Valeport. traditional manned solutions.

Linear Position Sensors constructed of and structural components of an oil special alloys with chemical resistance platform to a fraction of a microstrain.

NewTeck Sensor Solutions Ultrabeam Hydrographic to water in depths exceeding 15,000 ft Position measurements ensure the drill- or more and with external pressures up ing platform doesn’t shift to more than part of a remote monitoring and control to 20,000psi. 2 mm to ensure ongoing stability. system. NewTek offers these LVDTs

NewTek Subsea and Marine Sen- The Submersible LVDTs are also with AC, DC or custom digital outputs. sor designs are used for measuring used on the valves of Christmas tree newteksensors.com the strain on mooring chains that chokes to provide position feedback as www.marinetechnologynews.com 55