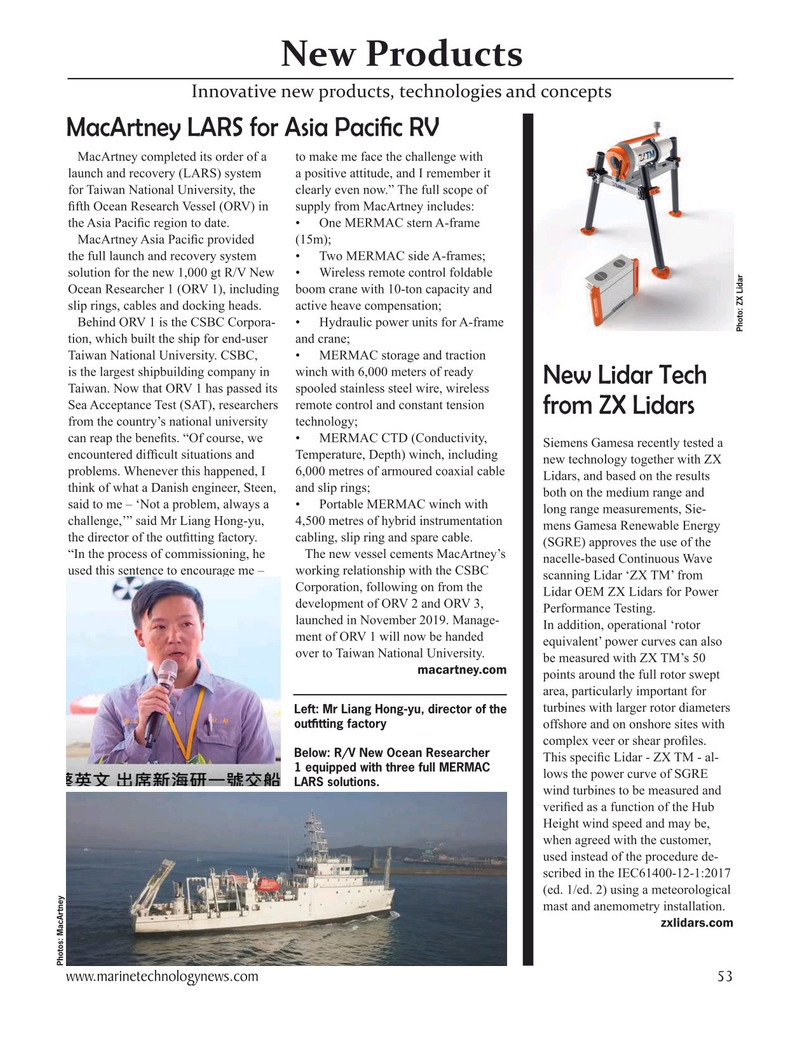 MacArtney completed its order of a to make me face the challenge with launch and recovery (LARS) system a positive attitude, and I remember it for Taiwan National University, the clearly even now.” The full scope of ? fth Ocean Research Vessel (ORV) in supply from MacArtney includes: the Asia Paci? c region to date. • One MERMAC stern A-frame

Photo: ZX Lidar tion, which built the ship for end-user and crane;

Taiwan National University. CSBC, • MERMAC storage and traction is the largest shipbuilding company in winch with 6,000 meters of ready

Siemens Gamesa recently tested a encountered dif? cult situations and Temperature, Depth) winch, including new technology together with ZX problems. Whenever this happened, I 6,000 metres of armoured coaxial cable

Lidars, and based on the results think of what a Danish engineer, Steen, and slip rings; both on the medium range and said to me – ‘Not a problem, always a • Portable MERMAC winch with long range measurements, Sie- challenge,’” said Mr Liang Hong-yu, 4,500 metres of hybrid instrumentation mens Gamesa Renewable Energy the director of the out? tting factory. cabling, slip ring and spare cable.

(SGRE) approves the use of the “In the process of commissioning, he The new vessel cements MacArtney’s nacelle-based Continuous Wave used this sentence to encourage me – working relationship with the CSBC scanning Lidar ‘ZX TM’ from

Corporation, following on from the

In addition, operational ‘rotor ment of ORV 1 will now be handed equivalent’ power curves can also over to Taiwan National University. be measured with ZX TM’s 50 macartney.com points around the full rotor swept area, particularly important for turbines with larger rotor diameters

Left: Mr Liang Hong-yu, director of the out? tting factory offshore and on onshore sites with complex veer or shear pro? les.

LARS solutions. wind turbines to be measured and veri? ed as a function of the Hub

Height wind speed and may be, when agreed with the customer, used instead of the procedure de- scribed in the IEC61400-12-1:2017 (ed. 1/ed. 2) using a meteorological mast and anemometry installation.