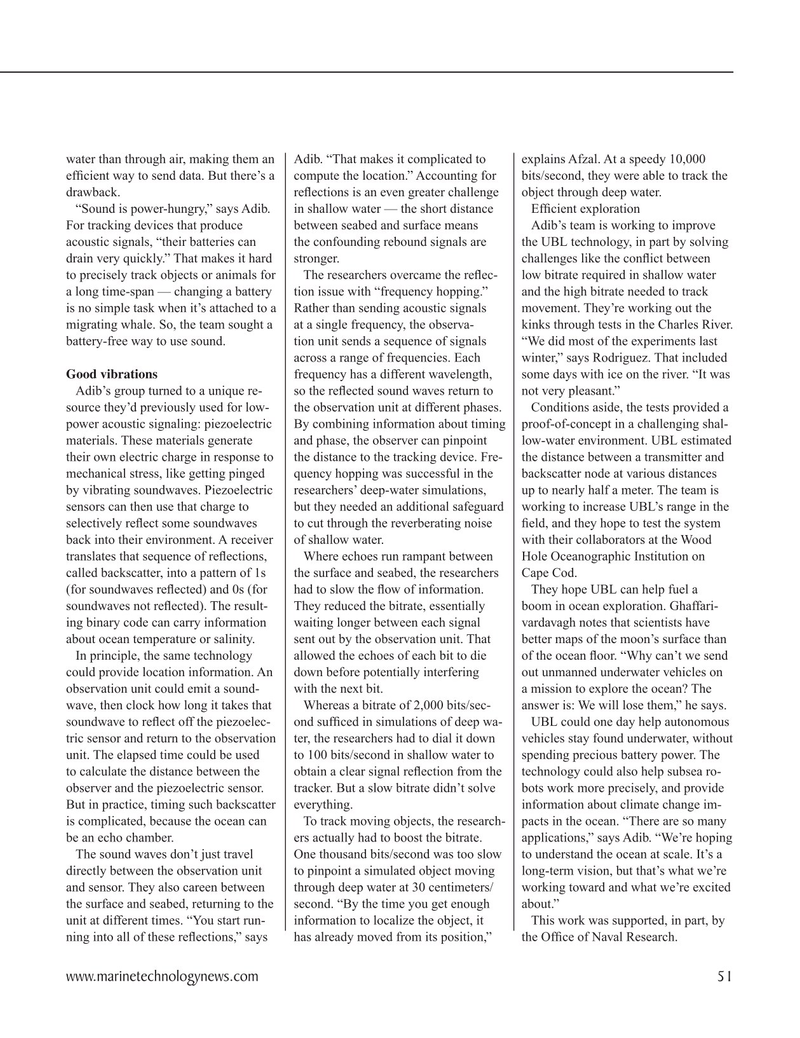 water than through air, making them an Adib. “That makes it complicated to explains Afzal. At a speedy 10,000 ef? cient way to send data. But there’s a compute the location.” Accounting for bits/second, they were able to track the drawback. re? ections is an even greater challenge object through deep water.

For tracking devices that produce between seabed and surface means Adib’s team is working to improve acoustic signals, “their batteries can the confounding rebound signals are the UBL technology, in part by solving drain very quickly.” That makes it hard stronger. challenges like the con? ict between to precisely track objects or animals for The researchers overcame the re? ec- low bitrate required in shallow water a long time-span — changing a battery tion issue with “frequency hopping.” and the high bitrate needed to track is no simple task when it’s attached to a Rather than sending acoustic signals movement. They’re working out the migrating whale. So, the team sought a at a single frequency, the observa- kinks through tests in the Charles River. battery-free way to use sound. tion unit sends a sequence of signals “We did most of the experiments last across a range of frequencies. Each winter,” says Rodriguez. That included

Good vibrations frequency has a different wavelength, some days with ice on the river. “It was

Adib’s group turned to a unique re- so the re? ected sound waves return to not very pleasant.” source they’d previously used for low- the observation unit at different phases. Conditions aside, the tests provided a power acoustic signaling: piezoelectric By combining information about timing proof-of-concept in a challenging shal- materials. These materials generate and phase, the observer can pinpoint low-water environment. UBL estimated their own electric charge in response to the distance to the tracking device. Fre- the distance between a transmitter and mechanical stress, like getting pinged quency hopping was successful in the backscatter node at various distances by vibrating soundwaves. Piezoelectric researchers’ deep-water simulations, up to nearly half a meter. The team is sensors can then use that charge to but they needed an additional safeguard working to increase UBL’s range in the selectively re? ect some soundwaves to cut through the reverberating noise ? eld, and they hope to test the system back into their environment. A receiver of shallow water. with their collaborators at the Wood translates that sequence of re? ections, Where echoes run rampant between Hole Oceanographic Institution on called backscatter, into a pattern of 1s the surface and seabed, the researchers Cape Cod.

(for soundwaves re? ected) and 0s (for had to slow the ? ow of information. They hope UBL can help fuel a soundwaves not re? ected). The result- They reduced the bitrate, essentially boom in ocean exploration. Ghaffari- ing binary code can carry information waiting longer between each signal vardavagh notes that scientists have about ocean temperature or salinity. sent out by the observation unit. That better maps of the moon’s surface than

In principle, the same technology allowed the echoes of each bit to die of the ocean ? oor. “Why can’t we send could provide location information. An down before potentially interfering out unmanned underwater vehicles on observation unit could emit a sound- with the next bit. a mission to explore the ocean? The wave, then clock how long it takes that Whereas a bitrate of 2,000 bits/sec- answer is: We will lose them,” he says.

soundwave to re? ect off the piezoelec- ond suf? ced in simulations of deep wa- UBL could one day help autonomous tric sensor and return to the observation ter, the researchers had to dial it down vehicles stay found underwater, without unit. The elapsed time could be used to 100 bits/second in shallow water to spending precious battery power. The to calculate the distance between the obtain a clear signal re? ection from the technology could also help subsea ro- observer and the piezoelectric sensor. tracker. But a slow bitrate didn’t solve bots work more precisely, and provide

But in practice, timing such backscatter everything. information about climate change im- is complicated, because the ocean can To track moving objects, the research- pacts in the ocean. “There are so many be an echo chamber. ers actually had to boost the bitrate. applications,” says Adib. “We’re hoping

The sound waves don’t just travel One thousand bits/second was too slow to understand the ocean at scale. It’s a directly between the observation unit to pinpoint a simulated object moving long-term vision, but that’s what we’re and sensor. They also careen between through deep water at 30 centimeters/ working toward and what we’re excited the surface and seabed, returning to the second. “By the time you get enough about.” unit at different times. “You start run- information to localize the object, it This work was supported, in part, by ning into all of these re? ections,” says has already moved from its position,” the Of? ce of Naval Research.