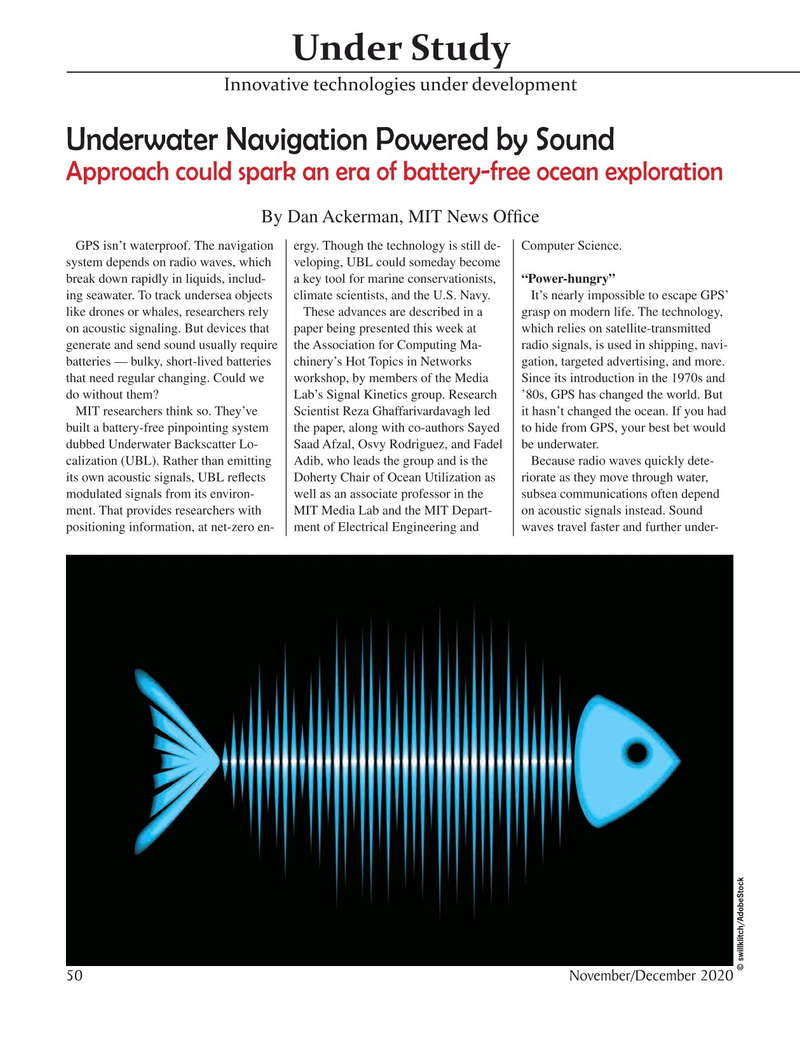 Approach could spark an era of battery-free ocean exploration

system depends on radio waves, which veloping, UBL could someday become break down rapidly in liquids, includ- a key tool for marine conservationists, “Power-hungry” ing seawater. To track undersea objects climate scientists, and the U.S. Navy. It’s nearly impossible to escape GPS’ like drones or whales, researchers rely These advances are described in a grasp on modern life. The technology, on acoustic signaling. But devices that paper being presented this week at which relies on satellite-transmitted generate and send sound usually require the Association for Computing Ma- radio signals, is used in shipping, navi- batteries — bulky, short-lived batteries chinery’s Hot Topics in Networks gation, targeted advertising, and more. that need regular changing. Could we workshop, by members of the Media Since its introduction in the 1970s and do without them? Lab’s Signal Kinetics group. Research ’80s, GPS has changed the world. But

MIT researchers think so. They’ve Scientist Reza Ghaffarivardavagh led it hasn’t changed the ocean. If you had built a battery-free pinpointing system the paper, along with co-authors Sayed to hide from GPS, your best bet would dubbed Underwater Backscatter Lo- Saad Afzal, Osvy Rodriguez, and Fadel be underwater.

calization (UBL). Rather than emitting Adib, who leads the group and is the Because radio waves quickly dete- its own acoustic signals, UBL re? ects Doherty Chair of Ocean Utilization as riorate as they move through water, modulated signals from its environ- well as an associate professor in the subsea communications often depend ment. That provides researchers with MIT Media Lab and the MIT Depart- on acoustic signals instead. Sound positioning information, at net-zero en- ment of Electrical Engineering and waves travel faster and further under- © swillklitch/AdobeStock 50 November/December 2020