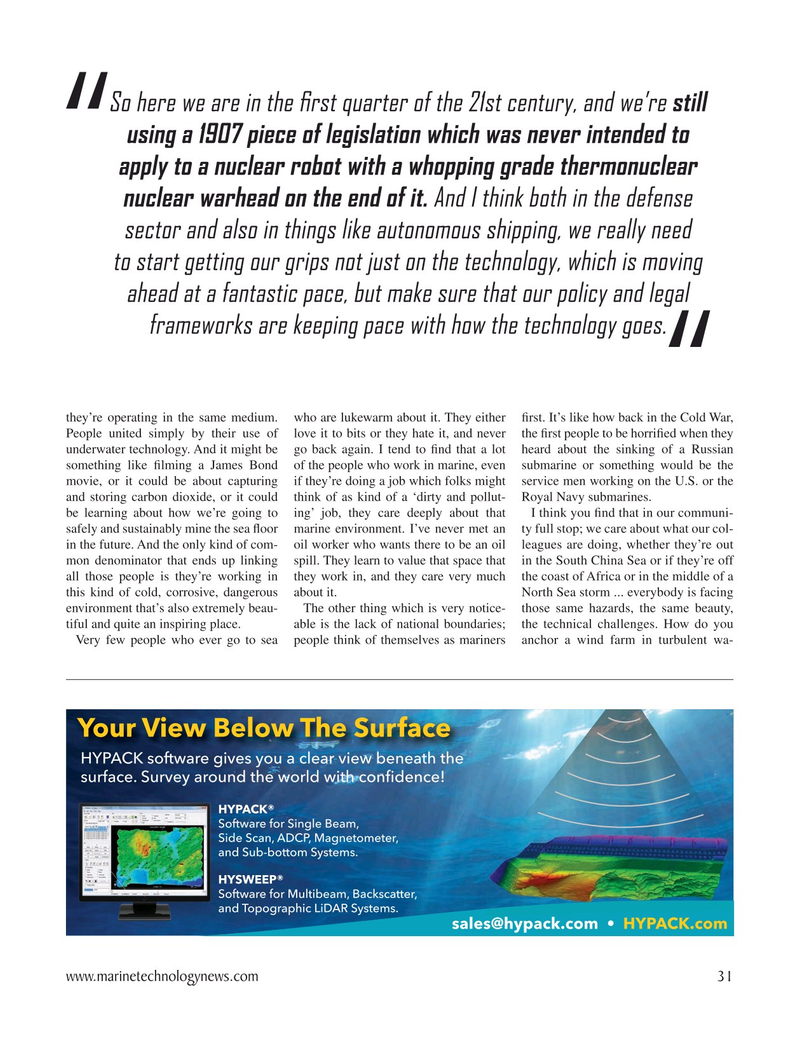 So here we are in the ? rst quarter of the 21st century, and we’re still using a 1907 piece of legislation which was never intended to apply to a nuclear robot with a whopping grade thermonuclear nuclear warhead on the end of it. And I think both in the defense sector and also in things like autonomous shipping, we really need to start getting our grips not just on the technology, which is moving ahead at a fantastic pace, but make sure that our policy and legal frameworks are keeping pace with how the technology goes. they’re operating in the same medium. who are lukewarm about it. They either ? rst. It’s like how back in the Cold War,

People united simply by their use of love it to bits or they hate it, and never the ? rst people to be horri? ed when they underwater technology. And it might be go back again. I tend to ? nd that a lot heard about the sinking of a Russian something like ? lming a James Bond of the people who work in marine, even submarine or something would be the movie, or it could be about capturing if they’re doing a job which folks might service men working on the U.S. or the and storing carbon dioxide, or it could think of as kind of a ‘dirty and pollut- Royal Navy submarines.

be learning about how we’re going to ing’ job, they care deeply about that I think you ? nd that in our communi- safely and sustainably mine the sea ? oor marine environment. I’ve never met an ty full stop; we care about what our col- in the future. And the only kind of com- oil worker who wants there to be an oil leagues are doing, whether they’re out mon denominator that ends up linking spill. They learn to value that space that in the South China Sea or if they’re off all those people is they’re working in they work in, and they care very much the coast of Africa or in the middle of a this kind of cold, corrosive, dangerous about it. North Sea storm ... everybody is facing environment that’s also extremely beau- The other thing which is very notice- those same hazards, the same beauty, tiful and quite an inspiring place. able is the lack of national boundaries; the technical challenges. How do you

Your View Below The Surface

HYPACK software gives you a clear view beneath the surface. Survey around the world with con?dence!