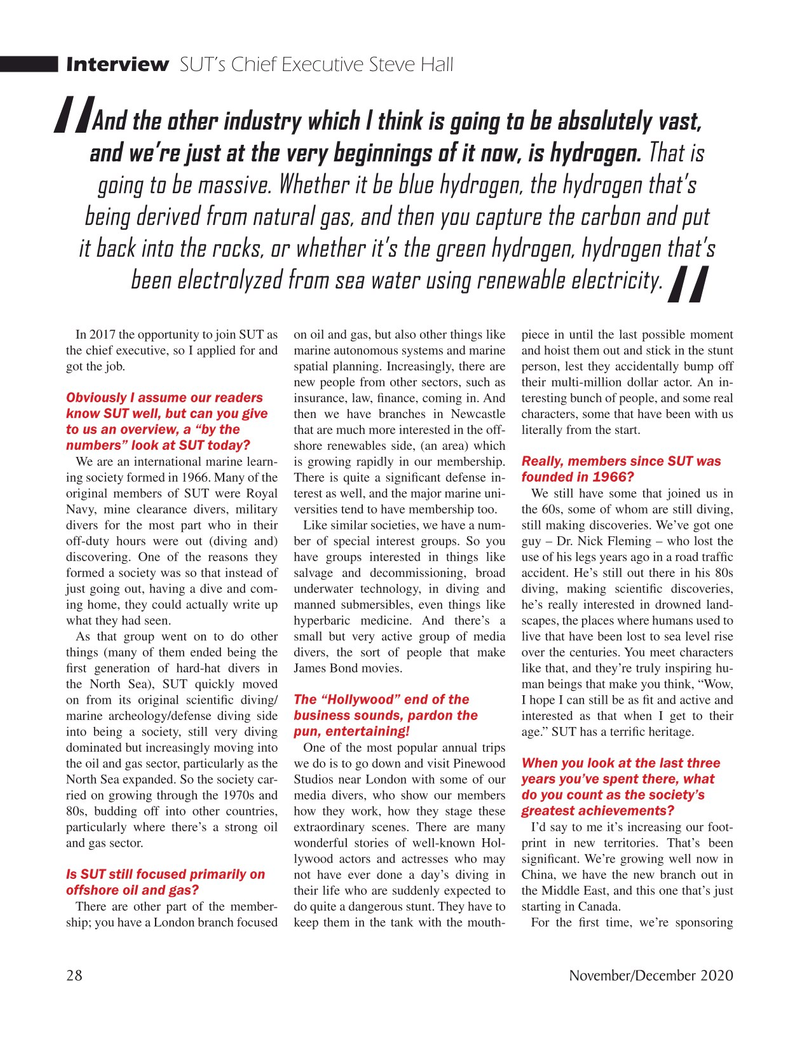 And the other industry which I think is going to be absolutely vast, and we’re just at the very beginnings of it now, is hydrogen. That is going to be massive. Whether it be blue hydrogen, the hydrogen that’s being derived from natural gas, and then you capture the carbon and put it back into the rocks, or whether it’s the green hydrogen, hydrogen that’s been electrolyzed from sea water using renewable electricity.

In 2017 the opportunity to join SUT as on oil and gas, but also other things like piece in until the last possible moment the chief executive, so I applied for and marine autonomous systems and marine and hoist them out and stick in the stunt got the job. spatial planning. Increasingly, there are person, lest they accidentally bump off new people from other sectors, such as their multi-million dollar actor. An in-

Obviously I assume our readers insurance, law, ? nance, coming in. And teresting bunch of people, and some real know SUT well, but can you give then we have branches in Newcastle characters, some that have been with us to us an overview, a “by the that are much more interested in the off- literally from the start.

shore renewables side, (an area) which

We are an international marine learn- is growing rapidly in our membership.

Really, members since SUT was founded in 1966?

ing society formed in 1966. Many of the There is quite a signi? cant defense in- original members of SUT were Royal terest as well, and the major marine uni- We still have some that joined us in

Navy, mine clearance divers, military versities tend to have membership too. the 60s, some of whom are still diving, divers for the most part who in their Like similar societies, we have a num- still making discoveries. We’ve got one off-duty hours were out (diving and) ber of special interest groups. So you guy – Dr. Nick Fleming – who lost the discovering. One of the reasons they have groups interested in things like use of his legs years ago in a road traf? c formed a society was so that instead of salvage and decommissioning, broad accident. He’s still out there in his 80s just going out, having a dive and com- underwater technology, in diving and diving, making scienti? c discoveries, ing home, they could actually write up manned submersibles, even things like he’s really interested in drowned land- what they had seen. hyperbaric medicine. And there’s a scapes, the places where humans used to

As that group went on to do other small but very active group of media live that have been lost to sea level rise things (many of them ended being the divers, the sort of people that make over the centuries. You meet characters ? rst generation of hard-hat divers in James Bond movies. like that, and they’re truly inspiring hu- the North Sea), SUT quickly moved man beings that make you think, “Wow, on from its original scienti? c diving/ I hope I can still be as ? t and active and The “Hollywood” end of the business sounds, pardon the marine archeology/defense diving side interested as that when I get to their pun, entertaining!

into being a society, still very diving age.” SUT has a terri? c heritage. dominated but increasingly moving into One of the most popular annual trips the oil and gas sector, particularly as the we do is to go down and visit Pinewood When you look at the last three years you’ve spent there, what

North Sea expanded. So the society car- Studios near London with some of our do you count as the society’s ried on growing through the 1970s and media divers, who show our members greatest achievements?

80s, budding off into other countries, how they work, how they stage these particularly where there’s a strong oil extraordinary scenes. There are many I’d say to me it’s increasing our foot- and gas sector. wonderful stories of well-known Hol- print in new territories. That’s been lywood actors and actresses who may signi? cant. We’re growing well now in

Is SUT still focused primarily on not have ever done a day’s diving in China, we have the new branch out in offshore oil and gas?

their life who are suddenly expected to the Middle East, and this one that’s just

There are other part of the member- do quite a dangerous stunt. They have to starting in Canada. ship; you have a London branch focused keep them in the tank with the mouth- For the ? rst time, we’re sponsoring 28 November/December 2020