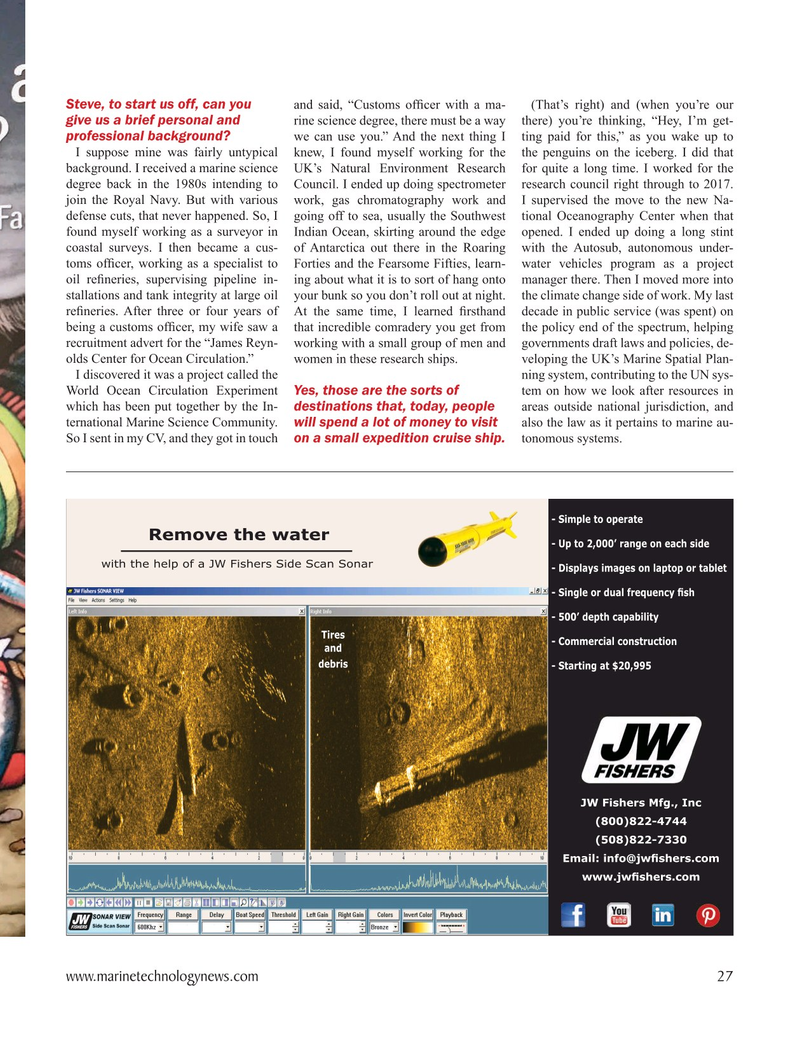 Steve, to start us off, can you and said, “Customs of? cer with a ma- (That’s right) and (when you’re our give us a brief personal and rine science degree, there must be a way there) you’re thinking, “Hey, I’m get- professional background?

we can use you.” And the next thing I ting paid for this,” as you wake up to

I suppose mine was fairly untypical knew, I found myself working for the the penguins on the iceberg. I did that background. I received a marine science UK’s Natural Environment Research for quite a long time. I worked for the degree back in the 1980s intending to Council. I ended up doing spectrometer research council right through to 2017. join the Royal Navy. But with various work, gas chromatography work and I supervised the move to the new Na- defense cuts, that never happened. So, I going off to sea, usually the Southwest tional Oceanography Center when that found myself working as a surveyor in Indian Ocean, skirting around the edge opened. I ended up doing a long stint coastal surveys. I then became a cus- of Antarctica out there in the Roaring with the Autosub, autonomous under- toms of? cer, working as a specialist to Forties and the Fearsome Fifties, learn- water vehicles program as a project oil re? neries, supervising pipeline in- ing about what it is to sort of hang onto manager there. Then I moved more into stallations and tank integrity at large oil your bunk so you don’t roll out at night. the climate change side of work. My last re? neries. After three or four years of At the same time, I learned ? rsthand decade in public service (was spent) on being a customs of? cer, my wife saw a that incredible comradery you get from the policy end of the spectrum, helping recruitment advert for the “James Reyn- working with a small group of men and governments draft laws and policies, de- olds Center for Ocean Circulation.” women in these research ships. veloping the UK’s Marine Spatial Plan-

I discovered it was a project called the ning system, contributing to the UN sys-

World Ocean Circulation Experiment tem on how we look after resources in Yes, those are the sorts of which has been put together by the In- areas outside national jurisdiction, and destinations that, today, people ternational Marine Science Community. also the law as it pertains to marine au- will spend a lot of money to visit

So I sent in my CV, and they got in touch tonomous systems. on a small expedition cruise ship.

Remove the water - Up to 2,000’ range on each side with the help of a JW Fishers Side Scan Sonar - Displays images on laptop or tablet 6LQJOHRUGXDOIUHTXHQF\¿VK - 500’ depth capability