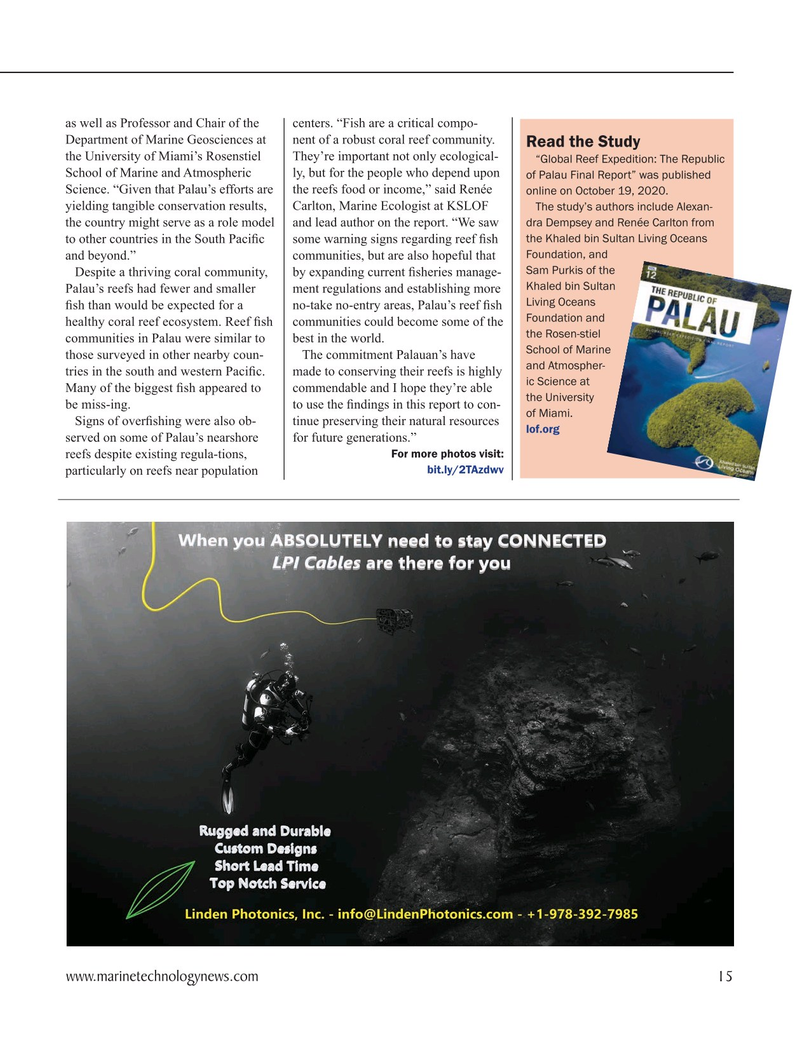 as well as Professor and Chair of the centers. “Fish are a critical compo-

Department of Marine Geosciences at nent of a robust coral reef community.

Read the Study the University of Miami’s Rosenstiel They’re important not only ecological- “Global Reef Expedition: The Republic

School of Marine and Atmospheric ly, but for the people who depend upon of Palau Final Report” was published

Science. “Given that Palau’s efforts are the reefs food or income,” said Renée online on October 19, 2020.

The study’s authors include Alexan- dra Dempsey and Renée Carlton from the country might serve as a role model and lead author on the report. “We saw the Khaled bin Sultan Living Oceans to other countries in the South Paci? c some warning signs regarding reef ? sh

Foundation, and and beyond.” communities, but are also hopeful that

Sam Purkis of the

Despite a thriving coral community, by expanding current ? sheries manage-

Living Oceans ? sh than would be expected for a no-take no-entry areas, Palau’s reef ? sh

Foundation and healthy coral reef ecosystem. Reef ? sh communities could become some of the the Rosen-stiel communities in Palau were similar to best in the world.

School of Marine those surveyed in other nearby coun- The commitment Palauan’s have and Atmospher- tries in the south and western Paci? c. made to conserving their reefs is highly ic Science at

Many of the biggest ? sh appeared to commendable and I hope they’re able the University be miss-ing. to use the ? ndings in this report to con- of Miami.

Signs of over? shing were also ob- tinue preserving their natural resources lof.org served on some of Palau’s nearshore for future generations.”