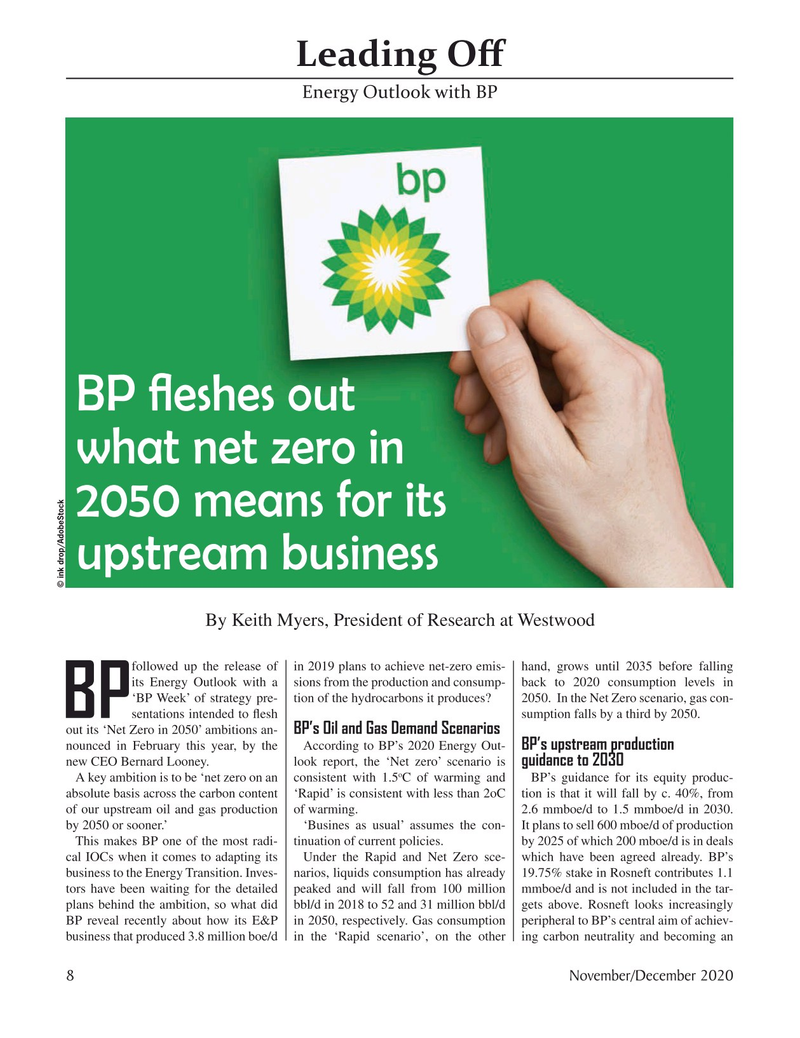 BP ? eshes out what net zero in 2050 means for its upstream business © ink drop/AdobeStock

By Keith Myers, President of Research at Westwood followed up the release of in 2019 plans to achieve net-zero emis- hand, grows until 2035 before falling its Energy Outlook with a sions from the production and consump- back to 2020 consumption levels in ‘BP Week’ of strategy pre- tion of the hydrocarbons it produces? 2050. In the Net Zero scenario, gas con-

BP sentations intended to ? esh sumption falls by a third by 2050.

out its ‘Net Zero in 2050’ ambitions an- BP’s Oil and Gas Demand Scenarios nounced in February this year, by the According to BP’s 2020 Energy Out- BP’s upstream production guidance to 2030 new CEO Bernard Looney. look report, the ‘Net zero’ scenario is o

A key ambition is to be ‘net zero on an consistent with 1.5 C of warming and BP’s guidance for its equity produc- absolute basis across the carbon content ‘Rapid’ is consistent with less than 2oC tion is that it will fall by c. 40%, from of our upstream oil and gas production of warming. 2.6 mmboe/d to 1.5 mmboe/d in 2030. by 2050 or sooner.’ ‘Busines as usual’ assumes the con- It plans to sell 600 mboe/d of production

This makes BP one of the most radi- tinuation of current policies. by 2025 of which 200 mboe/d is in deals cal IOCs when it comes to adapting its Under the Rapid and Net Zero sce- which have been agreed already. BP’s business to the Energy Transition. Inves- narios, liquids consumption has already 19.75% stake in Rosneft contributes 1.1 tors have been waiting for the detailed peaked and will fall from 100 million mmboe/d and is not included in the tar- plans behind the ambition, so what did bbl/d in 2018 to 52 and 31 million bbl/d gets above. Rosneft looks increasingly

BP reveal recently about how its E&P in 2050, respectively. Gas consumption peripheral to BP’s central aim of achiev- business that produced 3.8 million boe/d in the ‘Rapid scenario’, on the other ing carbon neutrality and becoming an 8 November/December 2020