At a hearing at Truro Magistrates Court, the owner of a tanker paid a total of $36,000 in fines and costs after pleading guilty to a breach of U.K. maritime pollution legislation. On February 25, 2012 a satellite operated by European Maritime Safety Agency (EMSA) detected a ship trailing a slick in the waters between Lands End and the Scilly Isles. A report was made to the MCA. The alert level was given as RED, i.e. high confidence. The ship was identified as the Singapore registered tanker Maersk Kiera. The slick itself was within 12 miles of land. The vessel was contacted by Falmouth Coastguard to query whether they were carrying out tank cleaning operations as they had satellite imagery of oil traces in the track of the Maersk Kiera. The Master confirmed to Falmouth Coastguard that tank cleaning and associated discharge following a cargo of palm oil was indeed being undertaken, but that they were complying with International requirements.

Under the Dangerous or Noxious Liquid Substances in Bulk Regulations 1996 (SI 3010) discharge of palm oil slops is permissible subject to certain conditions. One of those conditions is that the discharge is over 12 miles from the nearest land.

Communications between the operators of the Maersk Kiera and the MCA took place. Initial contact on May 11, 2012 with the owners Maersk stated that the vessel had been cleaning tanks, but had stopped before the vessel was within 13.5 miles of the coast. However, the satellite imagery clearly showed a slick trailing behind the vessel when she was within 12 miles of land. Eventually a breach of the U.K. Pollution Legislation was admitted by the owners on March 12, 2012.

The owners of the Maersk Kiera, Maersk Tankers Singapore Pte Limited, were fined £15,000 with a £120 victim surcharge and prosecution costs of £7404.88 were awarded.

Captain Jeremy Smart, Head of Enforcement at the Maritime & Coastguard Agency, said, “This is the first time satellite imagery has been successfully used as primary evidence in a maritime pollution prosecution brought by the Maritime and Coastguard Agency. The Agency will use all means available to identify and prosecute those carrying out illegal discharges within the U.K. Pollution Control Zone.” 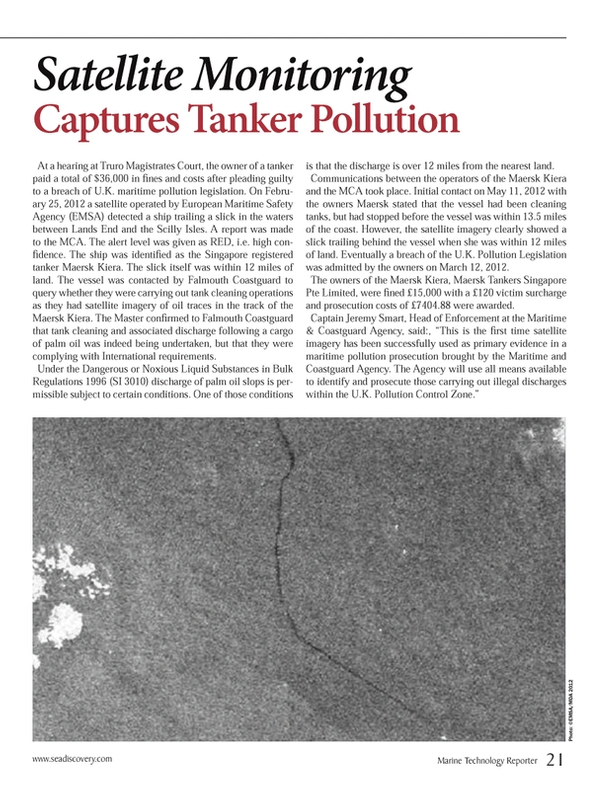