A launching of a very special kind awaited IWES scientists near the research wind farm alpha ventus, 45 km off Borkum: a LiDAR wind measuring buoy for measuring wind speeds was put to anchor in the direct vicinity of FINO1 meteorological mast. When compared with measuring masts, the buoy can be employed at any location with no extra installation costs and requires a less time-consuming authorization procedure.

This is all made possible by a correction algorithm, developed at the Fraunhofer IWES, which removes the proper motion of the floating platform from the values measured.

Using LiDAR (Light Detection And Ranging) appliances on land and on fixed platforms for measuring wind speeds at heights of 40-200m are proven. Proper motion, which falsifies measurement values taken from moving surfaces, has hitherto hindered the reliable employment of LiDAR applications offshore. Within the framework of the project “Offshore Measuring Buoy” – funded by the German Federal Ministry for the Environment– Fraunhofer scientists are excited about the first North Sea deployment of the gloating LiDAR system. A Windcube LiDAR device made by the company Leosphere has been integrated into the buoy.

The buoy will remain in the North Sea until October to prove its offshore suitability and to allow a validation of measurement accuracy using comparisons with the measurement data from the stationary mast. 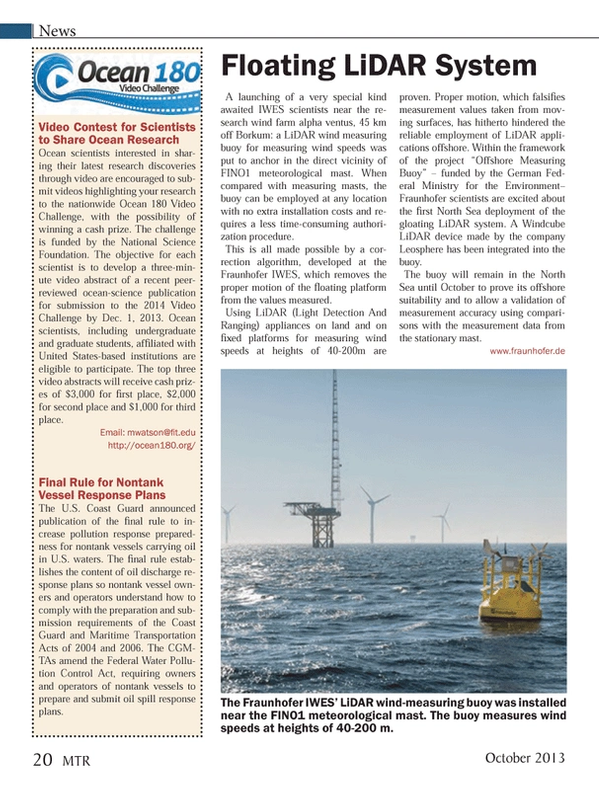