Imagenex has released new additions to its line of products. The new Model 878 Sidescan Sonar is the next generation in high resolution sidescan sonar. The unit runs two simultaneous sonars on each side at different sound wavelengths for enhanced image clarity. The Model 878 “RGB” Sidescan (triple simultaneous frequencies) has undergone a facelift and become more affordable. Both models are equipped with an optional echo sounder and a built-in orientation module as well as depth and temperature sensors.
The new DT100 Sensor Interface Relay (SIR) provides a central connection point for all your bathymetric sensors, including sonar (one or two units), GPS, MRU, Gyro/Heading and Sound Velocity. Powered by AC or DC, the SIR box provides DC operating voltages for each of your sensors. Sensor messages are time stamped and stored at their native update rates with a timestamp accuracy of 100 microseconds. The DT100 Multibeam Echo Sounder reaches a new performance level in the new DT101 – a single instrument integrating the sonar, motion reference unit (MRU) and sound velocity sensor into one compact unit. The DT101 requires one cable for operating all three sensors.
www.imagenex.com 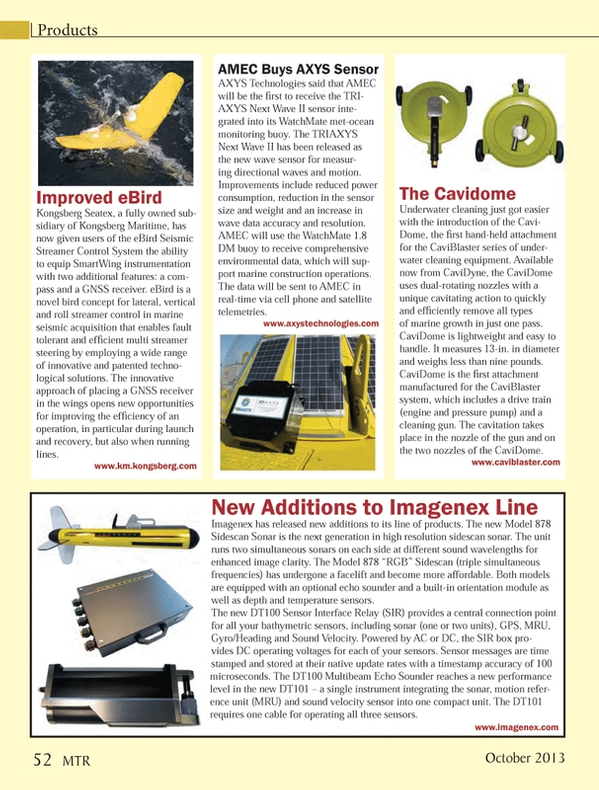