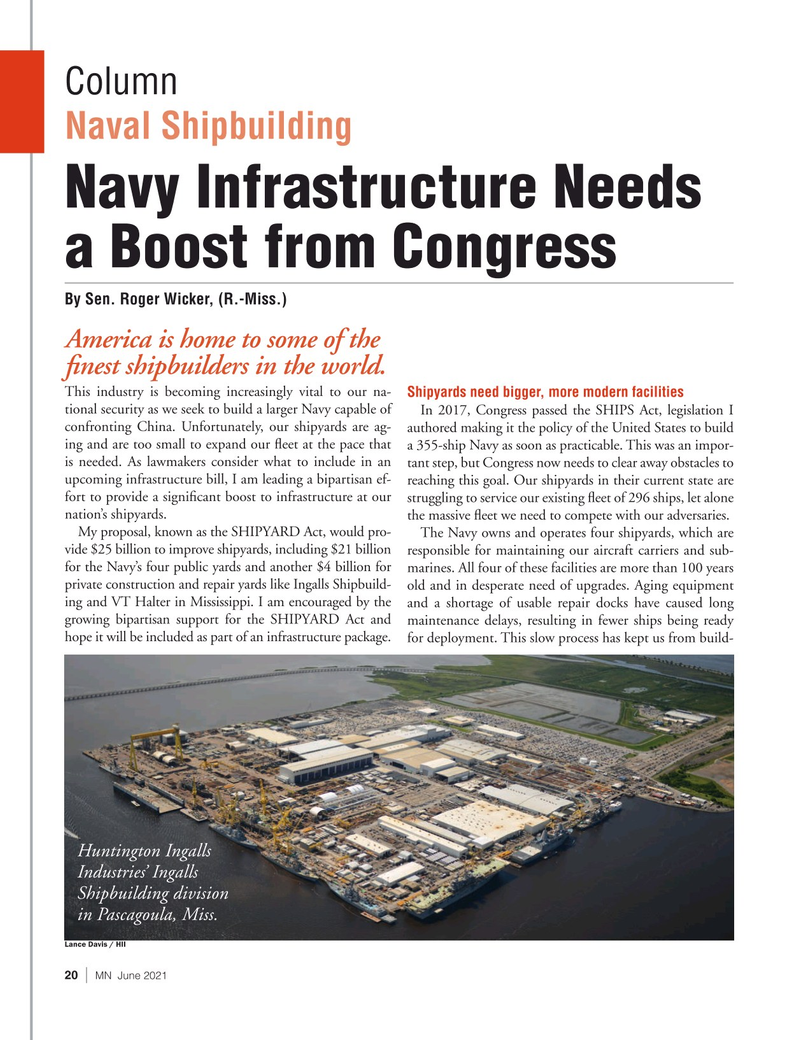 America is home to some of the ? nest shipbuilders in the world.

This industry is becoming increasingly vital to our na- Shipyards need bigger, more modern facilities tional security as we seek to build a larger Navy capable of In 2017, Congress passed the SHIPS Act, legislation I confronting China. Unfortunately, our shipyards are ag- authored making it the policy of the United States to build ing and are too small to expand our ? eet at the pace that a 355-ship Navy as soon as practicable. This was an impor- is needed. As lawmakers consider what to include in an tant step, but Congress now needs to clear away obstacles to upcoming infrastructure bill, I am leading a bipartisan ef- reaching this goal. Our shipyards in their current state are fort to provide a signi? cant boost to infrastructure at our struggling to service our existing ? eet of 296 ships, let alone nation’s shipyards. the massive ? eet we need to compete with our adversaries.

My proposal, known as the SHIPYARD Act, would pro- The Navy owns and operates four shipyards, which are vide $25 billion to improve shipyards, including $21 billion responsible for maintaining our aircraft carriers and sub- for the Navy’s four public yards and another $4 billion for marines. All four of these facilities are more than 100 years private construction and repair yards like Ingalls Shipbuild- old and in desperate need of upgrades. Aging equipment ing and VT Halter in Mississippi. I am encouraged by the and a shortage of usable repair docks have caused long growing bipartisan support for the SHIPYARD Act and maintenance delays, resulting in fewer ships being ready hope it will be included as part of an infrastructure package. for deployment. This slow process has kept us from build-