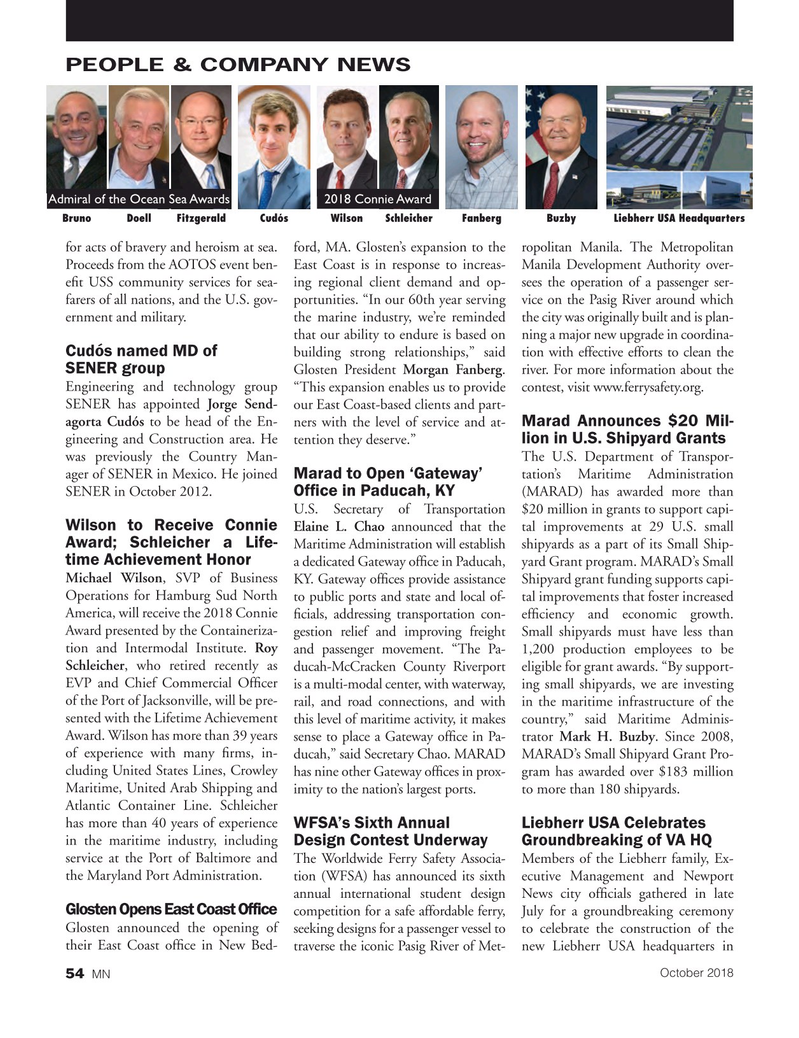 Proceeds from the AOTOS event ben- East Coast is in response to increas- Manila Development Authority over- e? t USS community services for sea- ing regional client demand and op- sees the operation of a passenger ser- farers of all nations, and the U.S. gov- portunities. “In our 60th year serving vice on the Pasig River around which ernment and military. the marine industry, we’re reminded the city was originally built and is plan- that our ability to endure is based on ning a major new upgrade in coordina-

Glosten President Morgan Fanberg. river. For more information about the

Engineering and technology group “This expansion enables us to provide contest, visit www.ferrysafety.org.

Marad Announces $20 Mil- lion in U.S. Shipyard Grants gineering and Construction area. He tention they deserve.” was previously the Country Man- The U.S. Department of Transpor- ager of SENER in Mexico. He joined tation’s Maritime Administration

SENER in October 2012. (MARAD) has awarded more than

Of? ce in Paducah, KY

U.S. Secretary of Transportation $20 million in grants to support capi-

Award presented by the Containeriza- gestion relief and improving freight Small shipyards must have less than tion and Intermodal Institute. Roy and passenger movement. “The Pa- 1,200 production employees to be

EVP and Chief Commercial Of? cer is a multi-modal center, with waterway, ing small shipyards, we are investing of the Port of Jacksonville, will be pre- rail, and road connections, and with in the maritime infrastructure of the sented with the Lifetime Achievement this level of maritime activity, it makes country,” said Maritime Adminis-

Award. Wilson has more than 39 years sense to place a Gateway of? ce in Pa- trator Mark H. Buzby. Since 2008, of experience with many ? rms, in- ducah,” said Secretary Chao. MARAD MARAD’s Small Shipyard Grant Pro- cluding United States Lines, Crowley has nine other Gateway of? ces in prox- gram has awarded over $183 million

Maritime, United Arab Shipping and imity to the nation’s largest ports. to more than 180 shipyards.

Atlantic Container Line. Schleicher has more than 40 years of experience

Glosten announced the opening of seeking designs for a passenger vessel to to celebrate the construction of the their East Coast of? ce in New Bed- traverse the iconic Pasig River of Met- new Liebherr USA headquarters in