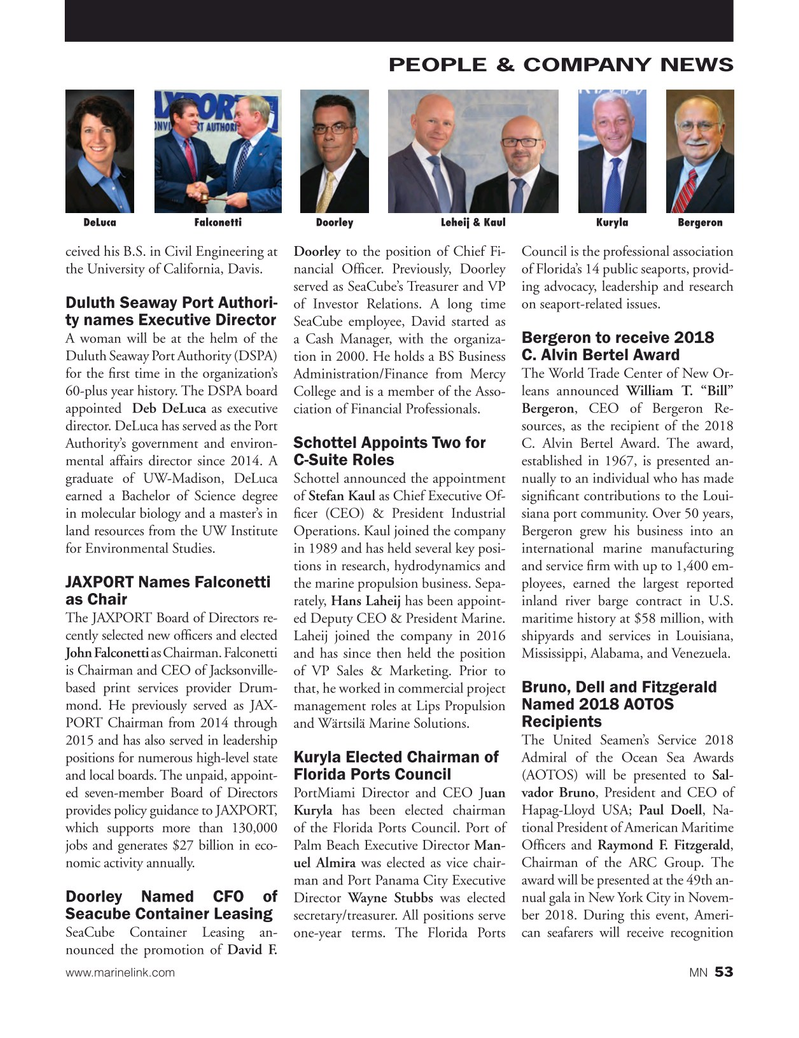 A woman will be at the helm of the a Cash Manager, with the organiza-

Duluth Seaway Port Authority (DSPA) tion in 2000. He holds a BS Business for the ? rst time in the organization’s Administration/Finance from Mercy The World Trade Center of New Or- 60-plus year history. The DSPA board College and is a member of the Asso- leans announced William T. “Bill” appointed Deb DeLuca as executive ciation of Financial Professionals. Bergeron, CEO of Bergeron Re- director. DeLuca has served as the Port sources, as the recipient of the 2018

C-Suite Roles mental affairs director since 2014. A established in 1967, is presented an- graduate of UW-Madison, DeLuca Schottel announced the appointment nually to an individual who has made earned a Bachelor of Science degree of Stefan Kaul as Chief Executive Of- signi? cant contributions to the Loui- in molecular biology and a master’s in ? cer (CEO) & President Industrial siana port community. Over 50 years, land resources from the UW Institute Operations. Kaul joined the company Bergeron grew his business into an for Environmental Studies. in 1989 and has held several key posi- international marine manufacturing tions in research, hydrodynamics and and service ? rm with up to 1,400 em-

The JAXPORT Board of Directors re- ed Deputy CEO & President Marine. maritime history at $58 million, with cently selected new of? cers and elected Laheij joined the company in 2016 shipyards and services in Louisiana,

John Falconetti as Chairman. Falconetti and has since then held the position Mississippi, Alabama, and Venezuela. is Chairman and CEO of Jacksonville- of VP Sales & Marketing. Prior to based print services provider Drum- that, he worked in commercial project

PORT Chairman from 2014 through and Wärtsilä Marine Solutions. 2015 and has also served in leadership The United Seamen’s Service 2018 positions for numerous high-level state Admiral of the Ocean Sea Awards

Florida Ports Council and local boards. The unpaid, appoint- (AOTOS) will be presented to Sal- ed seven-member Board of Directors PortMiami Director and CEO Juan vador Bruno, President and CEO of provides policy guidance to JAXPORT, Kuryla has been elected chairman Hapag-Lloyd USA; Paul Doell, Na- which supports more than 130,000 of the Florida Ports Council. Port of tional President of American Maritime jobs and generates $27 billion in eco- Palm Beach Executive Director Man- Of? cers and Raymond F. Fitzgerald, nomic activity annually. uel Almira was elected as vice chair- Chairman of the ARC Group. The man and Port Panama City Executive award will be presented at the 49th an-