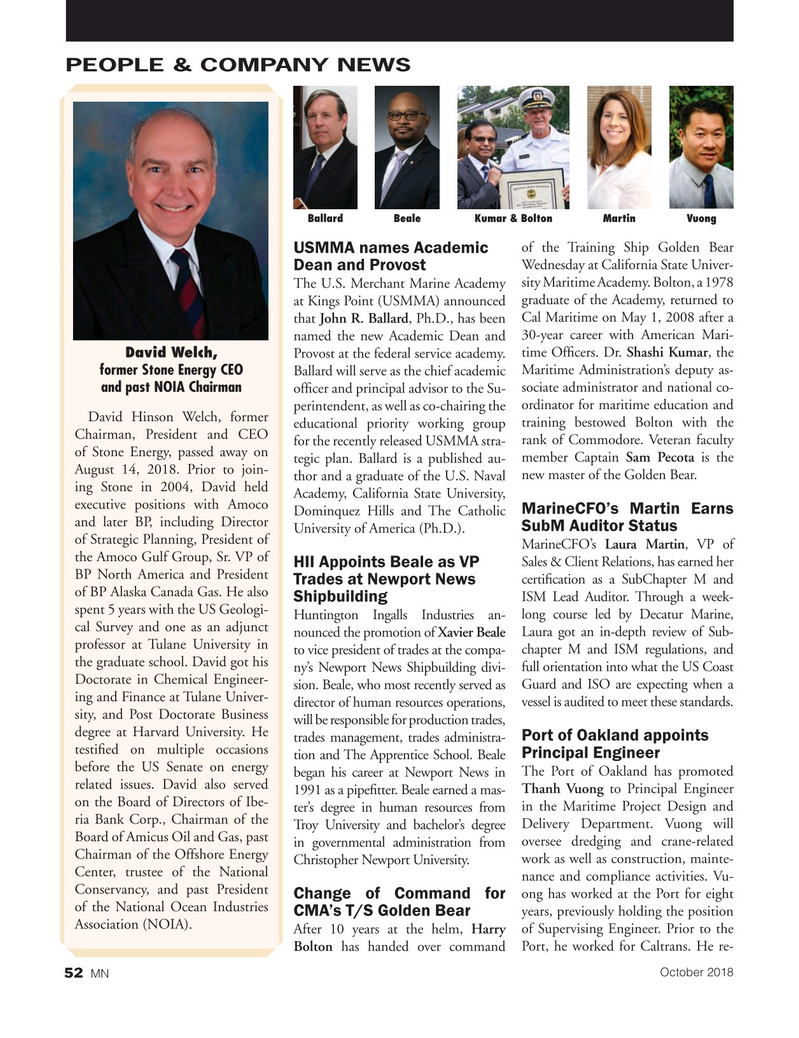 The U.S. Merchant Marine Academy sity Maritime Academy. Bolton, a 1978 at Kings Point (USMMA) announced graduate of the Academy, returned to that John R. Ballard, Ph.D., has been Cal Maritime on May 1, 2008 after a named the new Academic Dean and 30-year career with American Mari-

Ballard will serve as the chief academic Maritime Administration’s deputy as- and past NOIA Chairman of? cer and principal advisor to the Su- sociate administrator and national co- perintendent, as well as co-chairing the ordinator for maritime education and

Chairman, President and CEO for the recently released USMMA stra- rank of Commodore. Veteran faculty of Stone Energy, passed away on tegic plan. Ballard is a published au- member Captain Sam Pecota is the

Dominquez Hills and The Catholic and later BP, including Director

University of America (Ph.D.). of Strategic Planning, President of

Sales & Client Relations, has earned her

BP North America and President certi? cation as a SubChapter M and

ISM Lead Auditor. Through a week-

Shipbuilding spent 5 years with the US Geologi-

Huntington Ingalls Industries an- long course led by Decatur Marine, cal Survey and one as an adjunct nounced the promotion of Xavier Beale Laura got an in-depth review of Sub- professor at Tulane University in to vice president of trades at the compa- chapter M and ISM regulations, and the graduate school. David got his ny’s Newport News Shipbuilding divi- full orientation into what the US Coast

Doctorate in Chemical Engineer- sion. Beale, who most recently served as Guard and ISO are expecting when a ing and Finance at Tulane Univer- director of human resources operations, vessel is audited to meet these standards. sity, and Post Doctorate Business will be responsible for production trades, degree at Harvard University. He

Principal Engineer tion and The Apprentice School. Beale before the US Senate on energy began his career at Newport News in The Port of Oakland has promoted related issues. David also served 1991 as a pipe? tter. Beale earned a mas- Thanh Vuong to Principal Engineer on the Board of Directors of Ibe- ter’s degree in human resources from in the Maritime Project Design and ria Bank Corp., Chairman of the

Board of Amicus Oil and Gas, past in governmental administration from oversee dredging and crane-related

Chairman of the Offshore Energy

Center, trustee of the National nance and compliance activities. Vu-

Conservancy, and past President ong has worked at the Port for eight

Change of Command for of the National Ocean Industries years, previously holding the position

After 10 years at the helm, Harry of Supervising Engineer. Prior to the

Bolton has handed over command Port, he worked for Caltrans. He re-