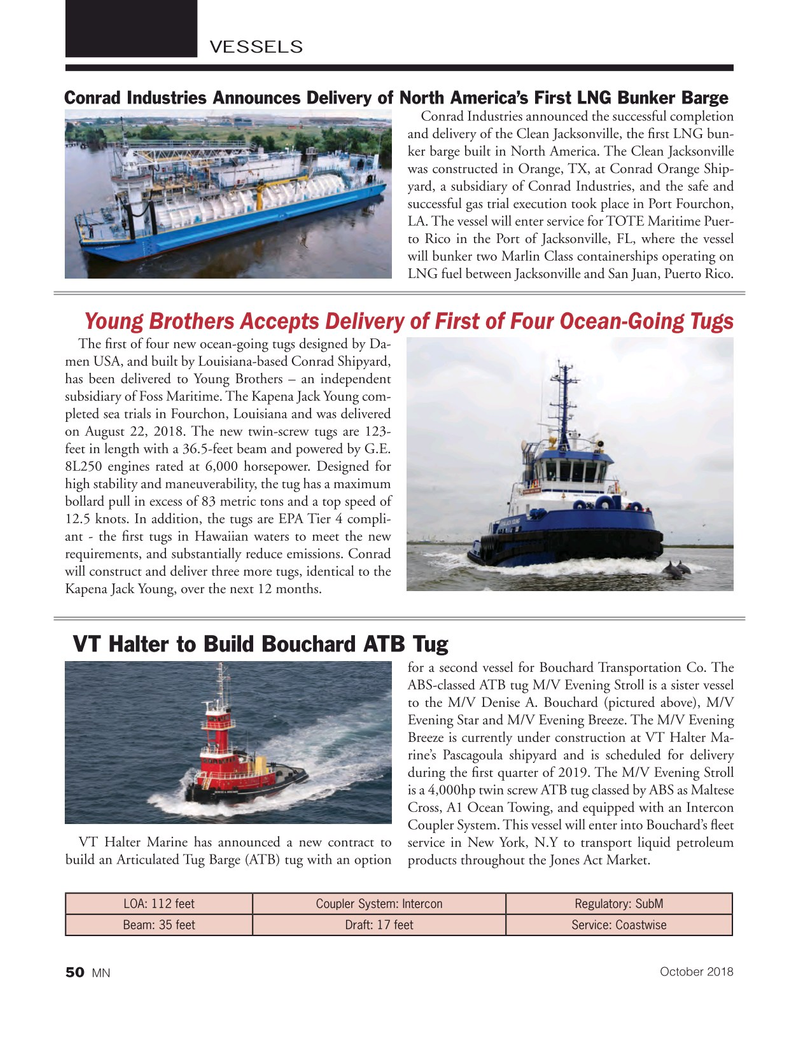 LA. The vessel will enter service for TOTE Maritime Puer- to Rico in the Port of Jacksonville, FL, where the vessel will bunker two Marlin Class containerships operating on

The ? rst of four new ocean-going tugs designed by Da- men USA, and built by Louisiana-based Conrad Shipyard, has been delivered to Young Brothers – an independent subsidiary of Foss Maritime. The Kapena Jack Young com- pleted sea trials in Fourchon, Louisiana and was delivered on August 22, 2018. The new twin-screw tugs are 123- feet in length with a 36.5-feet beam and powered by G.E. 8L250 engines rated at 6,000 horsepower. Designed for high stability and maneuverability, the tug has a maximum bollard pull in excess of 83 metric tons and a top speed of 12.5 knots. In addition, the tugs are EPA Tier 4 compli- ant - the ? rst tugs in Hawaiian waters to meet the new requirements, and substantially reduce emissions. Conrad will construct and deliver three more tugs, identical to the

Kapena Jack Young, over the next 12 months.

VT Halter to Build Bouchard ATB Tug for a second vessel for Bouchard Transportation Co. The

ABS-classed ATB tug M/V Evening Stroll is a sister vessel to the M/V Denise A. Bouchard (pictured above), M/V

Breeze is currently under construction at VT Halter Ma- rine’s Pascagoula shipyard and is scheduled for delivery during the ? rst quarter of 2019. The M/V Evening Stroll is a 4,000hp twin screw ATB tug classed by ABS as Maltese

Cross, A1 Ocean Towing, and equipped with an Intercon

Coupler System. This vessel will enter into Bouchard’s ? eet