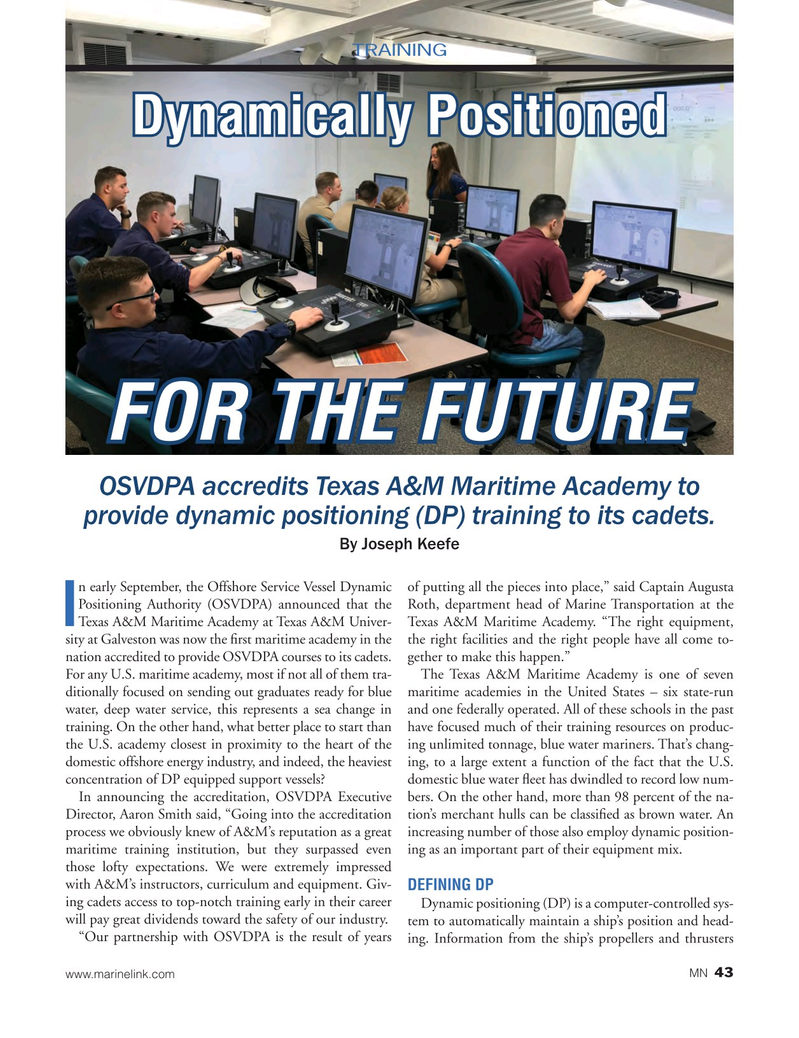 Positioning Authority (OSVDPA) announced that the Roth, department head of Marine Transportation at the

For any U.S. maritime academy, most if not all of them tra- The Texas A&M Maritime Academy is one of seven ditionally focused on sending out graduates ready for blue maritime academies in the United States – six state-run water, deep water service, this represents a sea change in and one federally operated. All of these schools in the past training. On the other hand, what better place to start than have focused much of their training resources on produc- the U.S. academy closest in proximity to the heart of the ing unlimited tonnage, blue water mariners. That’s chang- domestic offshore energy industry, and indeed, the heaviest ing, to a large extent a function of the fact that the U.S. concentration of DP equipped support vessels? domestic blue water ? eet has dwindled to record low num-

In announcing the accreditation, OSVDPA Executive bers. On the other hand, more than 98 percent of the na-

Director, Aaron Smith said, “Going into the accreditation tion’s merchant hulls can be classi? ed as brown water. An process we obviously knew of A&M’s reputation as a great increasing number of those also employ dynamic position- maritime training institution, but they surpassed even ing as an important part of their equipment mix.

those lofty expectations. We were extremely impressed with A&M’s instructors, curriculum and equipment. Giv-

Dynamic positioning (DP) is a computer-controlled sys- will pay great dividends toward the safety of our industry.

tem to automatically maintain a ship’s position and head- “Our partnership with OSVDPA is the result of years ing. Information from the ship’s propellers and thrusters 43 www.marinelink.com MN