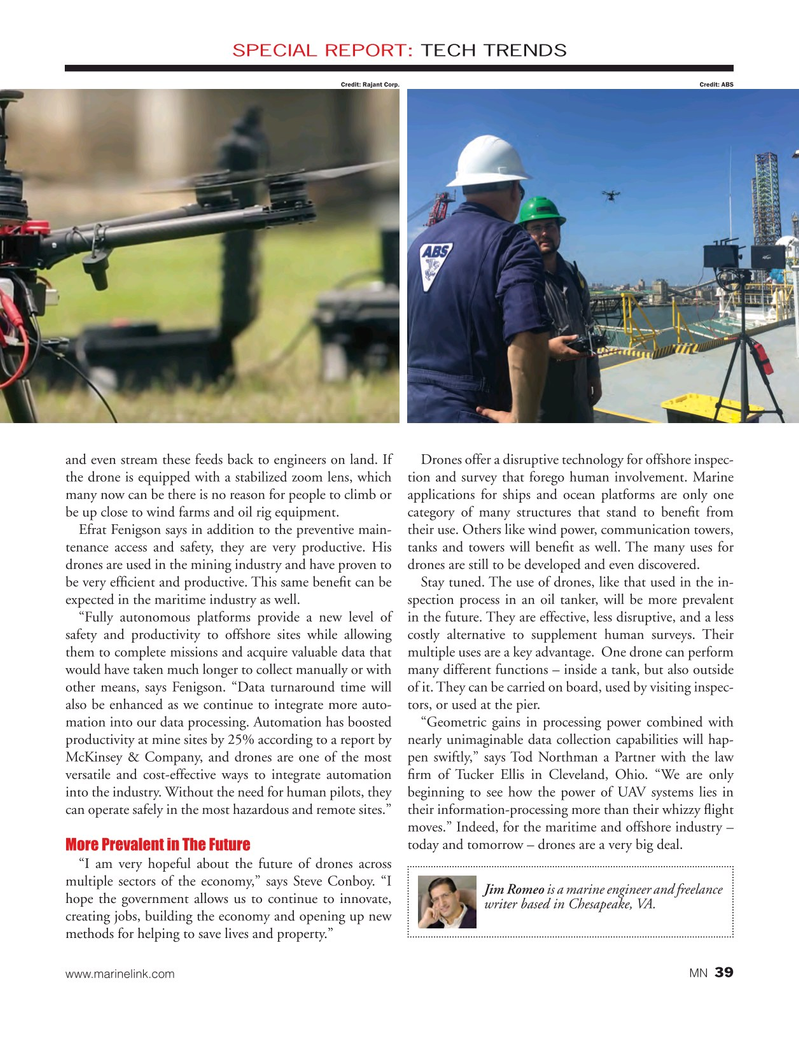 Credit: Rajant Corp. Credit: ABS and even stream these feeds back to engineers on land. If Drones offer a disruptive technology for offshore inspec- the drone is equipped with a stabilized zoom lens, which tion and survey that forego human involvement. Marine many now can be there is no reason for people to climb or applications for ships and ocean platforms are only one be up close to wind farms and oil rig equipment. category of many structures that stand to bene? t from

Efrat Fenigson says in addition to the preventive main- their use. Others like wind power, communication towers, tenance access and safety, they are very productive. His tanks and towers will bene? t as well. The many uses for drones are used in the mining industry and have proven to drones are still to be developed and even discovered. be very ef? cient and productive. This same bene? t can be Stay tuned. The use of drones, like that used in the in- expected in the maritime industry as well. spection process in an oil tanker, will be more prevalent “Fully autonomous platforms provide a new level of in the future. They are effective, less disruptive, and a less safety and productivity to offshore sites while allowing costly alternative to supplement human surveys. Their them to complete missions and acquire valuable data that multiple uses are a key advantage. One drone can perform would have taken much longer to collect manually or with many different functions – inside a tank, but also outside other means, says Fenigson. “Data turnaround time will of it. They can be carried on board, used by visiting inspec- also be enhanced as we continue to integrate more auto- tors, or used at the pier. mation into our data processing. Automation has boosted “Geometric gains in processing power combined with productivity at mine sites by 25% according to a report by nearly unimaginable data collection capabilities will hap-

McKinsey & Company, and drones are one of the most pen swiftly,” says Tod Northman a Partner with the law versatile and cost-effective ways to integrate automation ? rm of Tucker Ellis in Cleveland, Ohio. “We are only into the industry. Without the need for human pilots, they beginning to see how the power of UAV systems lies in can operate safely in the most hazardous and remote sites.” their information-processing more than their whizzy ? ight moves.” Indeed, for the maritime and offshore industry – today and tomorrow – drones are a very big deal.

More Prevalent in The Future “I am very hopeful about the future of drones across multiple sectors of the economy,” says Steve Conboy. “I

Jim Romeo is a marine engineer and freelance hope the government allows us to continue to innovate, writer based in Chesapeake, VA.

creating jobs, building the economy and opening up new methods for helping to save lives and property.” 39 www.marinelink.com MN