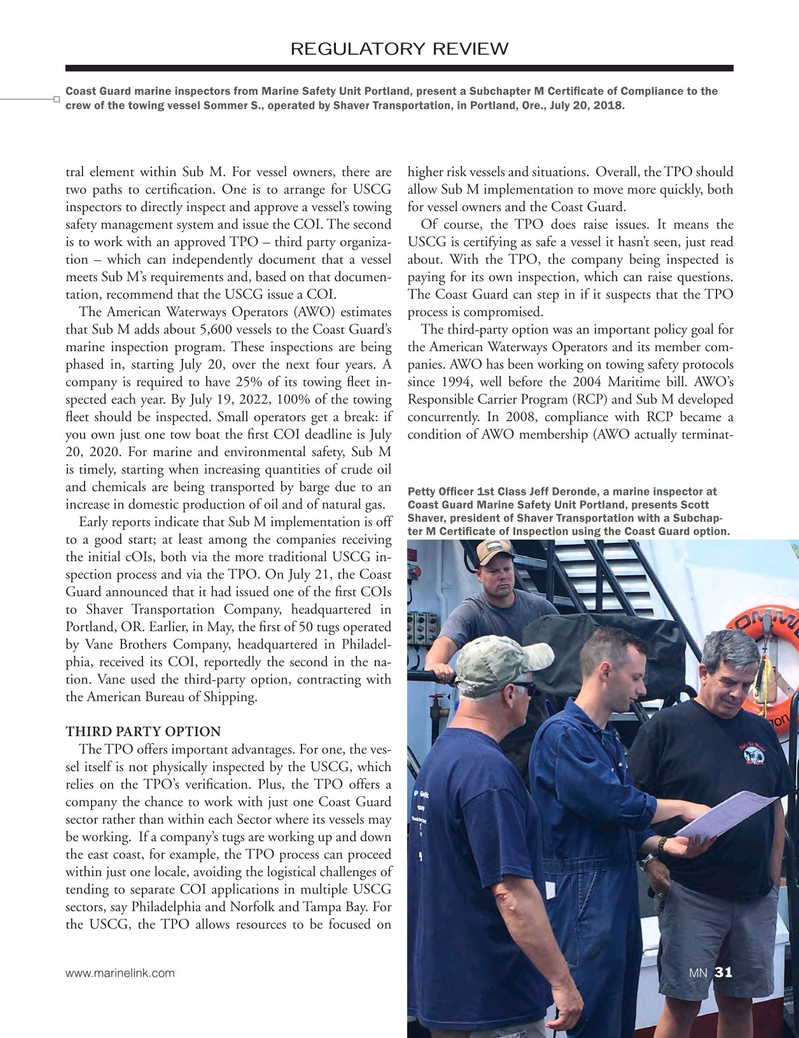 tral element within Sub M. For vessel owners, there are higher risk vessels and situations. Overall, the TPO should two paths to certi? cation. One is to arrange for USCG allow Sub M implementation to move more quickly, both inspectors to directly inspect and approve a vessel’s towing for vessel owners and the Coast Guard. safety management system and issue the COI. The second Of course, the TPO does raise issues. It means the is to work with an approved TPO – third party organiza- USCG is certifying as safe a vessel it hasn’t seen, just read tion – which can independently document that a vessel about. With the TPO, the company being inspected is meets Sub M’s requirements and, based on that documen- paying for its own inspection, which can raise questions. tation, recommend that the USCG issue a COI. The Coast Guard can step in if it suspects that the TPO

that Sub M adds about 5,600 vessels to the Coast Guard’s The third-party option was an important policy goal for marine inspection program. These inspections are being the American Waterways Operators and its member com- phased in, starting July 20, over the next four years. A panies. AWO has been working on towing safety protocols company is required to have 25% of its towing ? eet in- since 1994, well before the 2004 Maritime bill. AWO’s spected each year. By July 19, 2022, 100% of the towing Responsible Carrier Program (RCP) and Sub M developed ? eet should be inspected. Small operators get a break: if concurrently. In 2008, compliance with RCP became a you own just one tow boat the ? rst COI deadline is July condition of AWO membership (AWO actually terminat- 20, 2020. For marine and environmental safety, Sub M is timely, starting when increasing quantities of crude oil and chemicals are being transported by barge due to an

Shaver, president of Shaver Transportation with a Subchap-

to a good start; at least among the companies receiving the initial cOIs, both via the more traditional USCG in- spection process and via the TPO. On July 21, the Coast

Guard announced that it had issued one of the ? rst COIs to Shaver Transportation Company, headquartered in

Portland, OR. Earlier, in May, the ? rst of 50 tugs operated by Vane Brothers Company, headquartered in Philadel- phia, received its COI, reportedly the second in the na- tion. Vane used the third-party option, contracting with the American Bureau of Shipping.

The TPO offers important advantages. For one, the ves- sel itself is not physically inspected by the USCG, which relies on the TPO’s veri? cation. Plus, the TPO offers a company the chance to work with just one Coast Guard sector rather than within each Sector where its vessels may be working. If a company’s tugs are working up and down the east coast, for example, the TPO process can proceed within just one locale, avoiding the logistical challenges of tending to separate COI applications in multiple USCG sectors, say Philadelphia and Norfolk and Tampa Bay. For the USCG, the TPO allows resources to be focused on www.marinelink.com MN 31