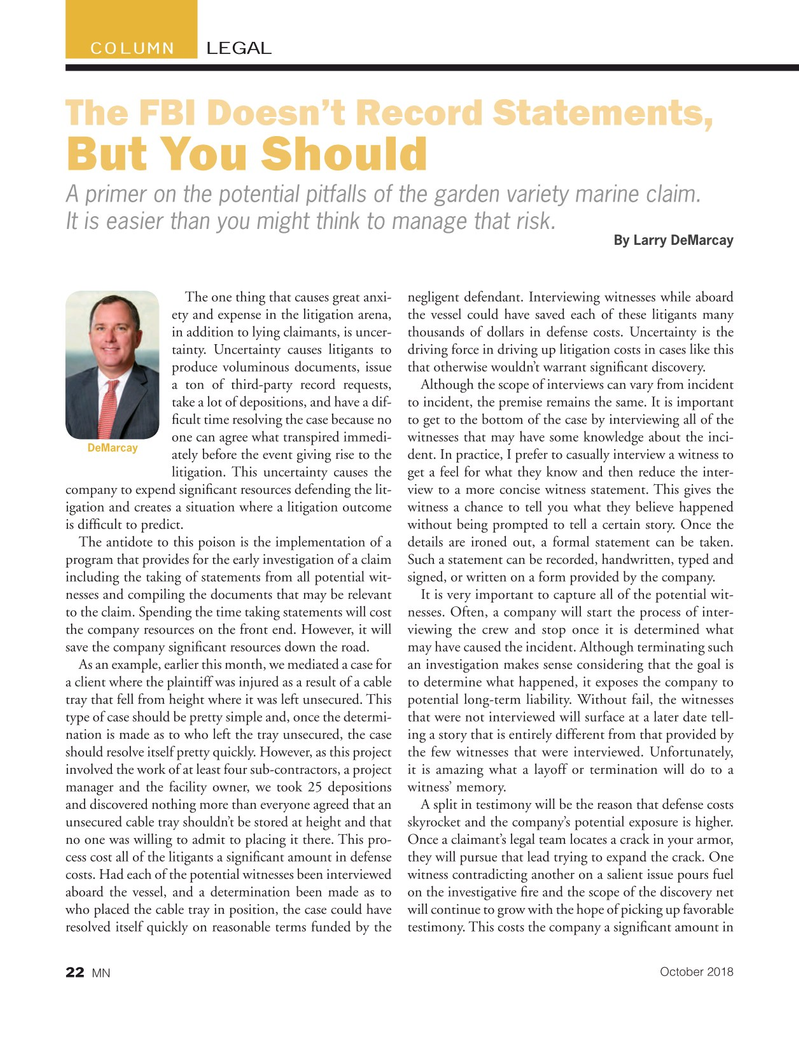 A primer on the potential pitfalls of the garden variety marine claim.

It is easier than you might think to manage that risk.

The one thing that causes great anxi- negligent defendant. Interviewing witnesses while aboard ety and expense in the litigation arena, the vessel could have saved each of these litigants many in addition to lying claimants, is uncer- thousands of dollars in defense costs. Uncertainty is the tainty. Uncertainty causes litigants to driving force in driving up litigation costs in cases like this produce voluminous documents, issue that otherwise wouldn’t warrant signi? cant discovery.

a ton of third-party record requests, Although the scope of interviews can vary from incident take a lot of depositions, and have a dif- to incident, the premise remains the same. It is important ? cult time resolving the case because no to get to the bottom of the case by interviewing all of the one can agree what transpired immedi- witnesses that may have some knowledge about the inci-

DeMarcay ately before the event giving rise to the dent. In practice, I prefer to casually interview a witness to litigation. This uncertainty causes the get a feel for what they know and then reduce the inter- company to expend signi? cant resources defending the lit- view to a more concise witness statement. This gives the igation and creates a situation where a litigation outcome witness a chance to tell you what they believe happened is dif? cult to predict. without being prompted to tell a certain story. Once the

The antidote to this poison is the implementation of a details are ironed out, a formal statement can be taken. program that provides for the early investigation of a claim Such a statement can be recorded, handwritten, typed and including the taking of statements from all potential wit- signed, or written on a form provided by the company.

nesses and compiling the documents that may be relevant It is very important to capture all of the potential wit- to the claim. Spending the time taking statements will cost nesses. Often, a company will start the process of inter- the company resources on the front end. However, it will viewing the crew and stop once it is determined what save the company signi? cant resources down the road. may have caused the incident. Although terminating such

As an example, earlier this month, we mediated a case for an investigation makes sense considering that the goal is a client where the plaintiff was injured as a result of a cable to determine what happened, it exposes the company to tray that fell from height where it was left unsecured. This potential long-term liability. Without fail, the witnesses type of case should be pretty simple and, once the determi- that were not interviewed will surface at a later date tell- nation is made as to who left the tray unsecured, the case ing a story that is entirely different from that provided by should resolve itself pretty quickly. However, as this project the few witnesses that were interviewed. Unfortunately, involved the work of at least four sub-contractors, a project it is amazing what a layoff or termination will do to a manager and the facility owner, we took 25 depositions witness’ memory. and discovered nothing more than everyone agreed that an A split in testimony will be the reason that defense costs unsecured cable tray shouldn’t be stored at height and that skyrocket and the company’s potential exposure is higher. no one was willing to admit to placing it there. This pro- Once a claimant’s legal team locates a crack in your armor, cess cost all of the litigants a signi? cant amount in defense they will pursue that lead trying to expand the crack. One costs. Had each of the potential witnesses been interviewed witness contradicting another on a salient issue pours fuel aboard the vessel, and a determination been made as to on the investigative ? re and the scope of the discovery net who placed the cable tray in position, the case could have will continue to grow with the hope of picking up favorable resolved itself quickly on reasonable terms funded by the testimony. This costs the company a signi? cant amount in