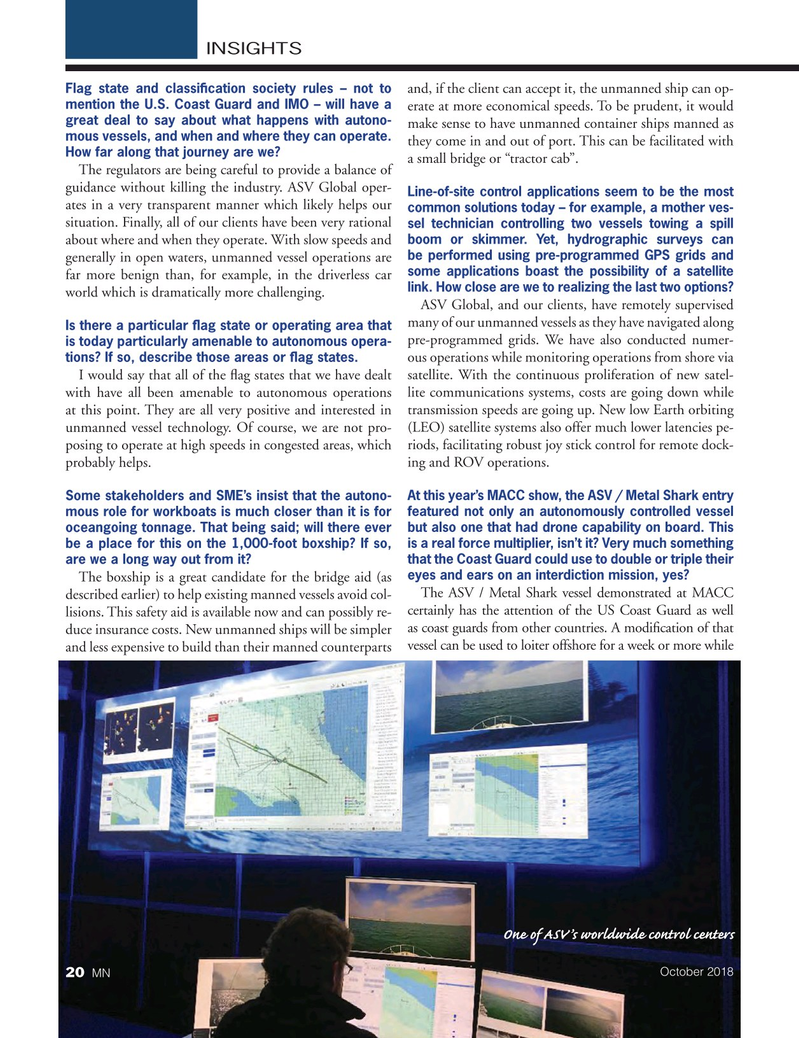 INSIGHTS and, if the client can accept it, the unmanned ship can op-

Flag state and classi? cation society rules – not to mention the U.S. Coast Guard and IMO – will have a erate at more economical speeds. To be prudent, it would great deal to say about what happens with autono- make sense to have unmanned container ships manned as mous vessels, and when and where they can operate. they come in and out of port. This can be facilitated with

How far along that journey are we?

a small bridge or “tractor cab”.

The regulators are being careful to provide a balance of guidance without killing the industry. ASV Global oper-

Line-of-site control applications seem to be the most ates in a very transparent manner which likely helps our common solutions today – for example, a mother ves- situation. Finally, all of our clients have been very rational sel technician controlling two vessels towing a spill boom or skimmer. Yet, hydrographic surveys can about where and when they operate. With slow speeds and be performed using pre-programmed GPS grids and generally in open waters, unmanned vessel operations are some applications boast the possibility of a satellite far more benign than, for example, in the driverless car link. How close are we to realizing the last two options?

world which is dramatically more challenging.

ASV Global, and our clients, have remotely supervised many of our unmanned vessels as they have navigated along

Is there a particular ? ag state or operating area that pre-programmed grids. We have also conducted numer- is today particularly amenable to autonomous opera- ous operations while monitoring operations from shore via tions? If so, describe those areas or ? ag states.

I would say that all of the ? ag states that we have dealt satellite. With the continuous proliferation of new satel- with have all been amenable to autonomous operations lite communications systems, costs are going down while at this point. They are all very positive and interested in transmission speeds are going up. New low Earth orbiting unmanned vessel technology. Of course, we are not pro- (LEO) satellite systems also offer much lower latencies pe- posing to operate at high speeds in congested areas, which riods, facilitating robust joy stick control for remote dock- probably helps. ing and ROV operations.

Some stakeholders and SME’s insist that the autono- At this year’s MACC show, the ASV / Metal Shark entry mous role for workboats is much closer than it is for featured not only an autonomously controlled vessel oceangoing tonnage. That being said; will there ever but also one that had drone capability on board. This be a place for this on the 1,000-foot boxship? If so, is a real force multiplier, isn’t it? Very much something are we a long way out from it? that the Coast Guard could use to double or triple their eyes and ears on an interdiction mission, yes?

The boxship is a great candidate for the bridge aid (as

The ASV / Metal Shark vessel demonstrated at MACC described earlier) to help existing manned vessels avoid col- certainly has the attention of the US Coast Guard as well lisions. This safety aid is available now and can possibly re- duce insurance costs. New unmanned ships will be simpler as coast guards from other countries. A modi? cation of that and less expensive to build than their manned counterparts vessel can be used to loiter offshore for a week or more while

One of ASV’s worldwide control centers