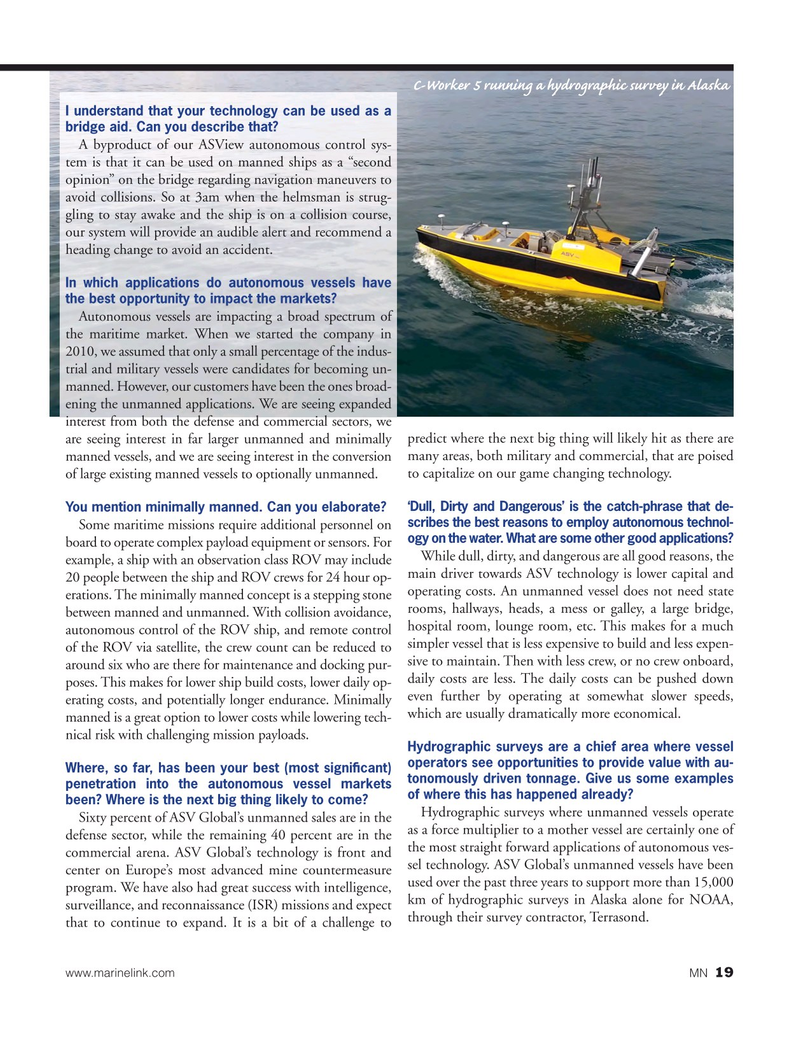 I understand that your technology can be used as a bridge aid. Can you describe that?

A byproduct of our ASView autonomous control sys- tem is that it can be used on manned ships as a “second opinion” on the bridge regarding navigation maneuvers to avoid collisions. So at 3am when the helmsman is strug- gling to stay awake and the ship is on a collision course, our system will provide an audible alert and recommend a heading change to avoid an accident.

In which applications do autonomous vessels have the best opportunity to impact the markets?

Autonomous vessels are impacting a broad spectrum of the maritime market. When we started the company in 2010, we assumed that only a small percentage of the indus- trial and military vessels were candidates for becoming un- manned. However, our customers have been the ones broad- ening the unmanned applications. We are seeing expanded interest from both the defense and commercial sectors, we are seeing interest in far larger unmanned and minimally predict where the next big thing will likely hit as there are manned vessels, and we are seeing interest in the conversion many areas, both military and commercial, that are poised of large existing manned vessels to optionally unmanned. to capitalize on our game changing technology.

You mention minimally manned. Can you elaborate? ‘Dull, Dirty and Dangerous’ is the catch-phrase that de- scribes the best reasons to employ autonomous technol-

Some maritime missions require additional personnel on ogy on the water. What are some other good applications?

board to operate complex payload equipment or sensors. For

While dull, dirty, and dangerous are all good reasons, the example, a ship with an observation class ROV may include main driver towards ASV technology is lower capital and 20 people between the ship and ROV crews for 24 hour op- erations. The minimally manned concept is a stepping stone operating costs. An unmanned vessel does not need state between manned and unmanned. With collision avoidance, rooms, hallways, heads, a mess or galley, a large bridge, autonomous control of the ROV ship, and remote control hospital room, lounge room, etc. This makes for a much of the ROV via satellite, the crew count can be reduced to simpler vessel that is less expensive to build and less expen- sive to maintain. Then with less crew, or no crew onboard, around six who are there for maintenance and docking pur- daily costs are less. The daily costs can be pushed down poses. This makes for lower ship build costs, lower daily op- erating costs, and potentially longer endurance. Minimally even further by operating at somewhat slower speeds, which are usually dramatically more economical.

Hydrographic surveys are a chief area where vessel

Where, so far, has been your best (most signi? cant) operators see opportunities to provide value with au- penetration into the autonomous vessel markets tonomously driven tonnage. Give us some examples of where this has happened already?

been? Where is the next big thing likely to come?

Sixty percent of ASV Global’s unmanned sales are in the defense sector, while the remaining 40 percent are in the as a force multiplier to a mother vessel are certainly one of commercial arena. ASV Global’s technology is front and the most straight forward applications of autonomous ves- center on Europe’s most advanced mine countermeasure sel technology. ASV Global’s unmanned vessels have been program. We have also had great success with intelligence, used over the past three years to support more than 15,000 surveillance, and reconnaissance (ISR) missions and expect km of hydrographic surveys in Alaska alone for NOAA, that to continue to expand. It is a bit of a challenge to through their survey contractor, Terrasond.