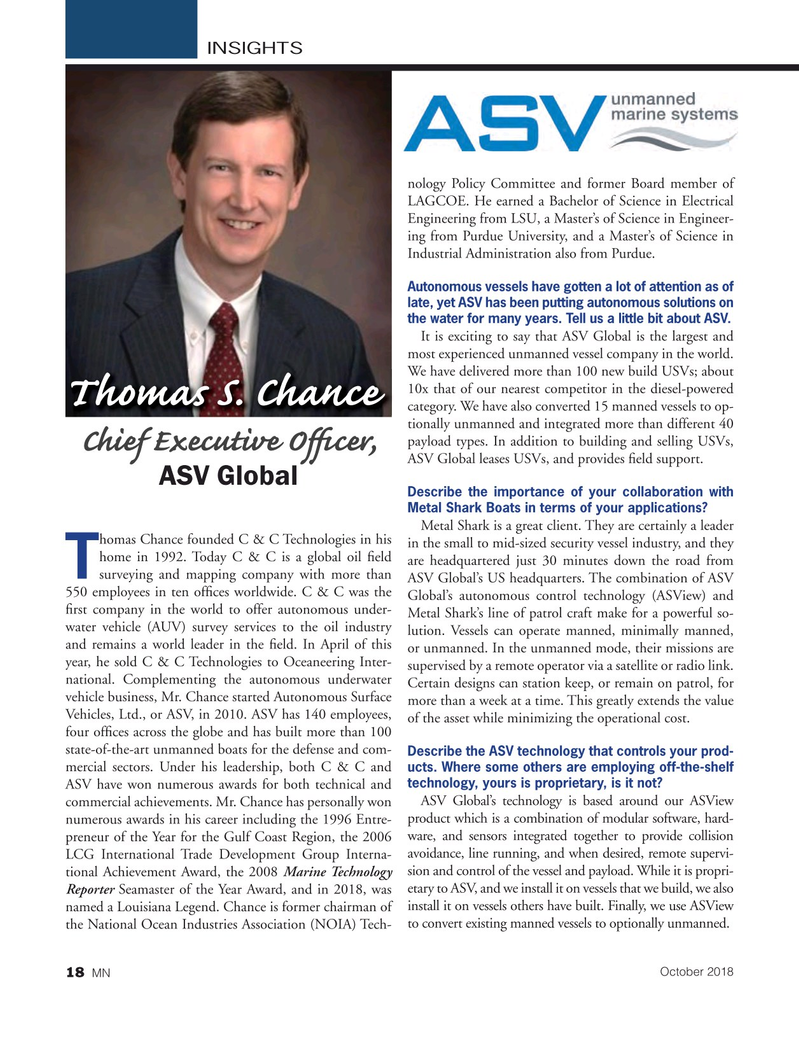 INSIGHTS nology Policy Committee and former Board member of

LAGCOE. He earned a Bachelor of Science in Electrical

Autonomous vessels have gotten a lot of attention as of late, yet ASV has been putting autonomous solutions on the water for many years. Tell us a little bit about ASV.

It is exciting to say that ASV Global is the largest and most experienced unmanned vessel company in the world.

We have delivered more than 100 new build USVs; about 10x that of our nearest competitor in the diesel-powered

Describe the importance of your collaboration with

Metal Shark is a great client. They are certainly a leader homas Chance founded C & C Technologies in his in the small to mid-sized security vessel industry, and they home in 1992. Today C & C is a global oil ? eld are headquartered just 30 minutes down the road from

Tsurveying and mapping company with more than ASV Global’s US headquarters. The combination of ASV 550 employees in ten of? ces worldwide. C & C was the Global’s autonomous control technology (ASView) and ? rst company in the world to offer autonomous under-

Metal Shark’s line of patrol craft make for a powerful so- water vehicle (AUV) survey services to the oil industry lution. Vessels can operate manned, minimally manned, and remains a world leader in the ? eld. In April of this or unmanned. In the unmanned mode, their missions are year, he sold C & C Technologies to Oceaneering Inter- supervised by a remote operator via a satellite or radio link. national. Complementing the autonomous underwater Certain designs can station keep, or remain on patrol, for vehicle business, Mr. Chance started Autonomous Surface more than a week at a time. This greatly extends the value

Vehicles, Ltd., or ASV, in 2010. ASV has 140 employees, of the asset while minimizing the operational cost.

four of? ces across the globe and has built more than 100 state-of-the-art unmanned boats for the defense and com-

Describe the ASV technology that controls your prod- mercial sectors. Under his leadership, both C & C and ucts. Where some others are employing off-the-shelf technology, yours is proprietary, is it not?

ASV have won numerous awards for both technical and commercial achievements. Mr. Chance has personally won ASV Global’s technology is based around our ASView numerous awards in his career including the 1996 Entre- product which is a combination of modular software, hard- preneur of the Year for the Gulf Coast Region, the 2006 ware, and sensors integrated together to provide collision

LCG International Trade Development Group Interna- avoidance, line running, and when desired, remote supervi- tional Achievement Award, the 2008 Marine Technology sion and control of the vessel and payload. While it is propri-

Reporter Seamaster of the Year Award, and in 2018, was etary to ASV, and we install it on vessels that we build, we also named a Louisiana Legend. Chance is former chairman of install it on vessels others have built. Finally, we use ASView the National Ocean Industries Association (NOIA) Tech- to convert existing manned vessels to optionally unmanned.