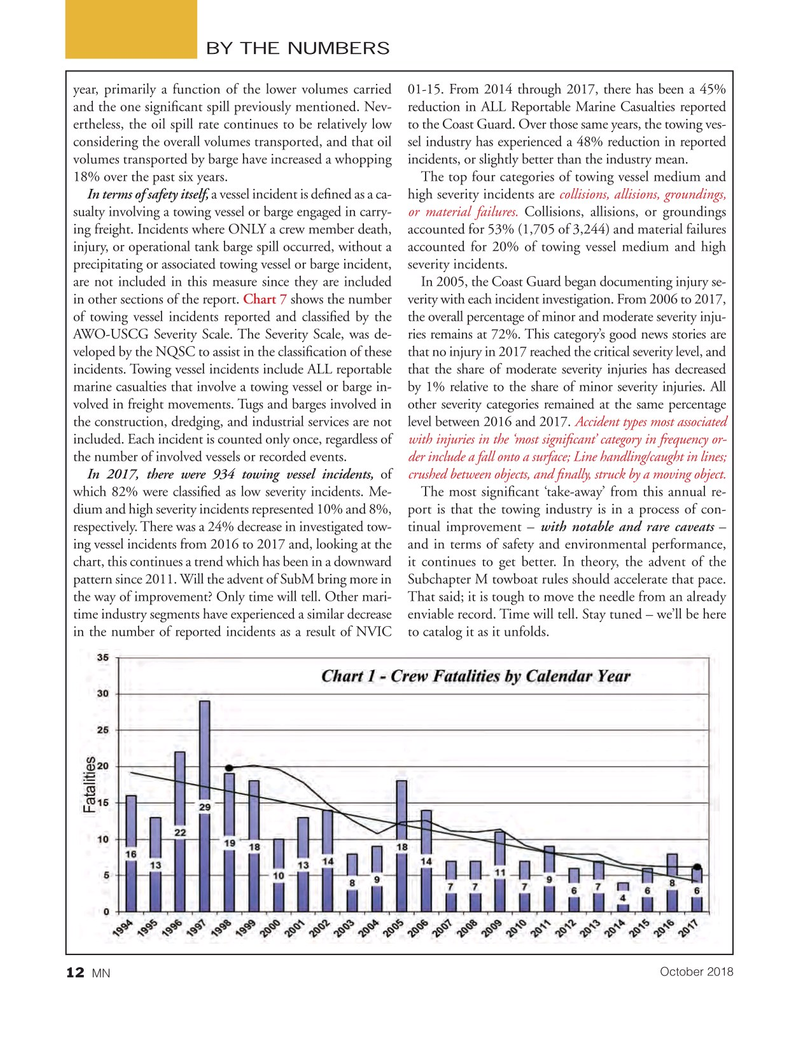 BY THE NUMBERS year, primarily a function of the lower volumes carried 01-15. From 2014 through 2017, there has been a 45% and the one signi? cant spill previously mentioned. Nev- reduction in ALL Reportable Marine Casualties reported ertheless, the oil spill rate continues to be relatively low to the Coast Guard. Over those same years, the towing ves- considering the overall volumes transported, and that oil sel industry has experienced a 48% reduction in reported volumes transported by barge have increased a whopping incidents, or slightly better than the industry mean.

18% over the past six years. The top four categories of towing vessel medium and

In terms of safety itself, a vessel incident is de? ned as a ca- high severity incidents are collisions, allisions, groundings, sualty involving a towing vessel or barge engaged in carry- or material failures. Collisions, allisions, or groundings ing freight. Incidents where ONLY a crew member death, accounted for 53% (1,705 of 3,244) and material failures injury, or operational tank barge spill occurred, without a accounted for 20% of towing vessel medium and high precipitating or associated towing vessel or barge incident, severity incidents.

are not included in this measure since they are included In 2005, the Coast Guard began documenting injury se- in other sections of the report. Chart 7 shows the number verity with each incident investigation. From 2006 to 2017, of towing vessel incidents reported and classi? ed by the the overall percentage of minor and moderate severity inju-

AWO-USCG Severity Scale. The Severity Scale, was de- ries remains at 72%. This category’s good news stories are veloped by the NQSC to assist in the classi? cation of these that no injury in 2017 reached the critical severity level, and incidents. Towing vessel incidents include ALL reportable that the share of moderate severity injuries has decreased marine casualties that involve a towing vessel or barge in- by 1% relative to the share of minor severity injuries. All volved in freight movements. Tugs and barges involved in other severity categories remained at the same percentage the construction, dredging, and industrial services are not level between 2016 and 2017. Accident types most associated included. Each incident is counted only once, regardless of with injuries in the ‘most signi