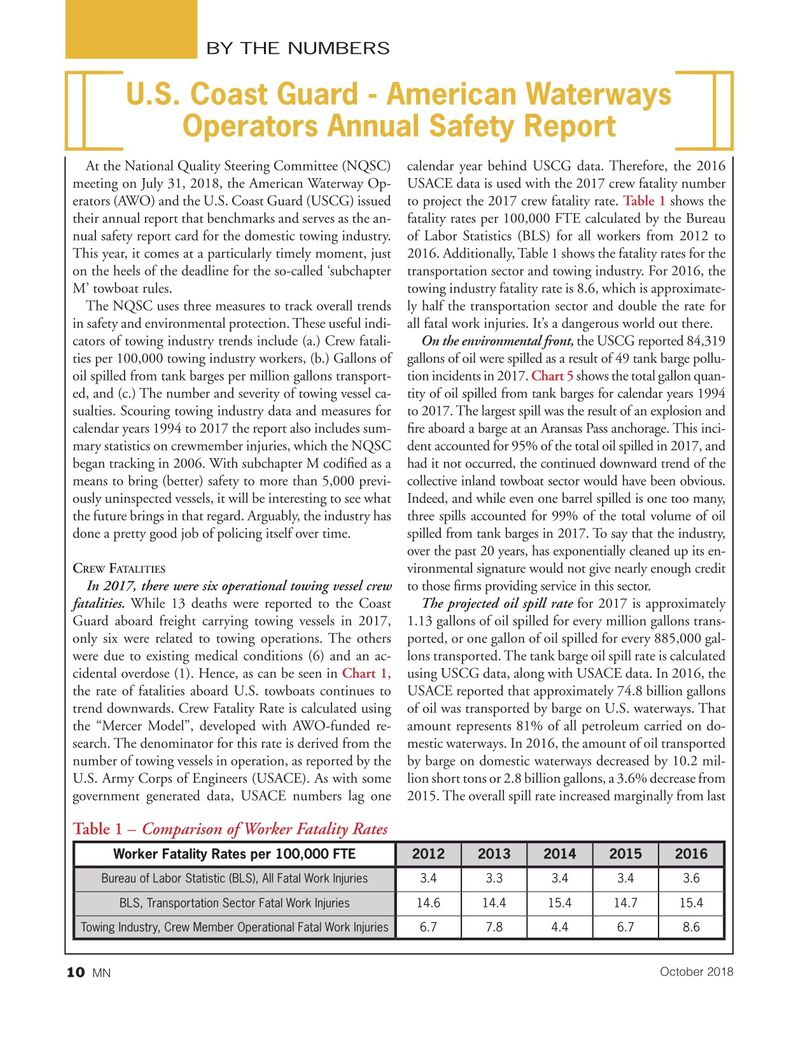 At the National Quality Steering Committee (NQSC) calendar year behind USCG data. Therefore, the 2016 meeting on July 31, 2018, the American Waterway Op- USACE data is used with the 2017 crew fatality number erators (AWO) and the U.S. Coast Guard (USCG) issued to project the 2017 crew fatality rate. Table 1 shows the their annual report that benchmarks and serves as the an- fatality rates per 100,000 FTE calculated by the Bureau nual safety report card for the domestic towing industry. of Labor Statistics (BLS) for all workers from 2012 to

This year, it comes at a particularly timely moment, just 2016. Additionally, Table 1 shows the fatality rates for the on the heels of the deadline for the so-called ‘subchapter transportation sector and towing industry. For 2016, the

The NQSC uses three measures to track overall trends ly half the transportation sector and double the rate for in safety and environmental protection. These useful indi- all fatal work injuries. It’s a dangerous world out there.

cators of towing industry trends include (a.) Crew fatali- On the environmental front, the USCG reported 84,319 ties per 100,000 towing industry workers, (b.) Gallons of gallons of oil were spilled as a result of 49 tank barge pollu- oil spilled from tank barges per million gallons transport- tion incidents in 2017. Chart 5 shows the total gallon quan- ed, and (c.) The number and severity of towing vessel ca- tity of oil spilled from tank barges for calendar years 1994 sualties. Scouring towing industry data and measures for to 2017. The largest spill was the result of an explosion and calendar years 1994 to 2017 the report also includes sum-