Todd Schauer is Director of Operations at Resolve Marine Group, as well as President of the American Salvage Association. After graduating from the U.S. Coast Guard Academy with a degree in Naval Architecture in 1991, he followed that up with graduate degrees in Naval Architecture, Marine Engineering and Mechanical Engineering from the University of Michigan. And, while his considerable U.S. Coast Guard experience includes shipboard engineering, marine safety, advanced engineering and emergency response, he is best known for his longtime role in the commercial salvage business. Schauer possesses more than 25 years of success as a Project Manager, Salvage Master, Naval Architect, and Marine Engineer; including 20 years of salvage related experience, underscored by five years of service on the USCG Salvage Emergency Response Team (SERT), including acting as Team Leader. Simply put, this salvage and response professional has done it all. Today, he is directly responsible for Resolve’s global salvage, wreck removal and firefighting operations. His most recent major project accomplishments include wreck remediation of the M/V Rena and the Ro/Ro Amadeo 1 wreck removal. The American Salvage Association (ASA) is indeed fortunate to have him at the helm, and Marine News is similarly grateful to have him weigh in on the hottest response topics of the day. Listen in as Todd Schauer schools us on ‘all things salvage.’ 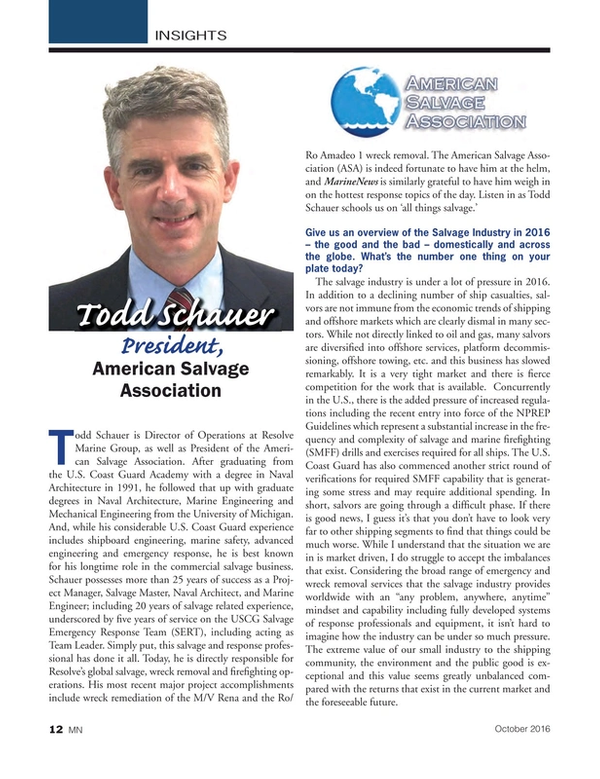 Other stories from October 2016 issue