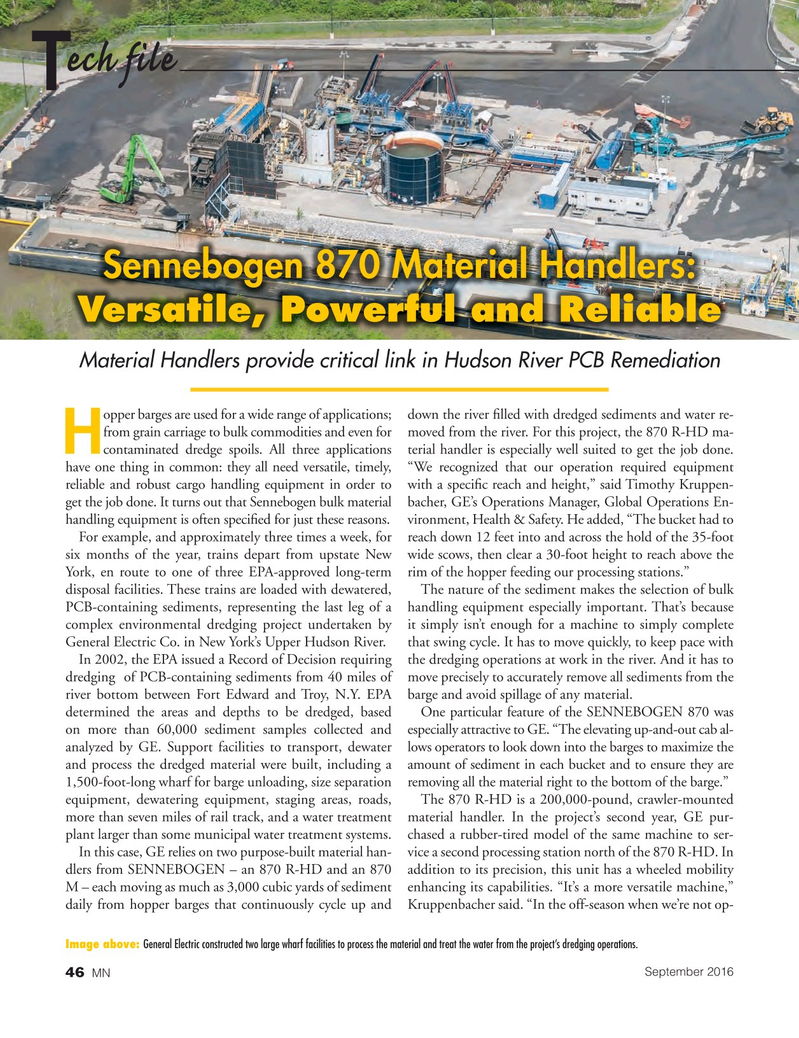 Material Handlers provide critical link in Hudson River PCB Remediation opper barges are used for a wide range of applications; down the river ? lled with dredged sediments and water re- from grain carriage to bulk commodities and even for moved from the river. For this project, the 870 R-HD ma-

Hcontaminated dredge spoils. All three applications terial handler is especially well suited to get the job done. have one thing in common: they all need versatile, timely, “We recognized that our operation required equipment reliable and robust cargo handling equipment in order to with a speci? c reach and height,” said Timothy Kruppen- get the job done. It turns out that Sennebogen bulk material bacher, GE’s Operations Manager, Global Operations En- handling equipment is often speci? ed for just these reasons. vironment, Health & Safety. He added, “The bucket had to

For example, and approximately three times a week, for reach down 12 feet into and across the hold of the 35-foot six months of the year, trains depart from upstate New wide scows, then clear a 30-foot height to reach above the

York, en route to one of three EPA-approved long-term rim of the hopper feeding our processing stations.” disposal facilities. These trains are loaded with dewatered, The nature of the sediment makes the selection of bulk

PCB-containing sediments, representing the last leg of a handling equipment especially important. That’s because complex environmental dredging project undertaken by it simply isn’t enough for a machine to simply complete

General Electric Co. in New York’s Upper Hudson River. that swing cycle. It has to move quickly, to keep pace with

In 2002, the EPA issued a Record of Decision requiring the dredging operations at work in the river. And it has to dredging of PCB-containing sediments from 40 miles of move precisely to accurately remove all sediments from the river bottom between Fort Edward and Troy, N.Y. EPA barge and avoid spillage of any material. determined the areas and depths to be dredged, based One particular feature of the SENNEBOGEN 870 was on more than 60,000 sediment samples collected and especially attractive to GE. “The elevating up-and-out cab al- analyzed by GE. Support facilities to transport, dewater lows operators to look down into the barges to maximize the and process the dredged material were built, including a amount of sediment in each bucket and to ensure they are 1,500-foot-long wharf for barge unloading, size separation removing all the material right to the bottom of the barge.” equipment, dewatering equipment, staging areas, roads, The 870 R-HD is a 200,000-pound, crawler-mounted more than seven miles of rail track, and a water treatment material handler. In the project’s second year, GE pur- plant larger than some municipal water treatment systems. chased a rubber-tired model of the same machine to ser-

In this case, GE relies on two purpose-built material han- vice a second processing station north of the 870 R-HD. In dlers from SENNEBOGEN – an 870 R-HD and an 870 addition to its precision, this unit has a wheeled mobility

M – each moving as much as 3,000 cubic yards of sediment enhancing its capabilities. “It’s a more versatile machine,” daily from hopper barges that continuously cycle up and Kruppenbacher said. “In the off-season when we’re not op-

Image above: General Electric constructed two large wharf facilities to process the material and treat the water from the project’s dredging operations.