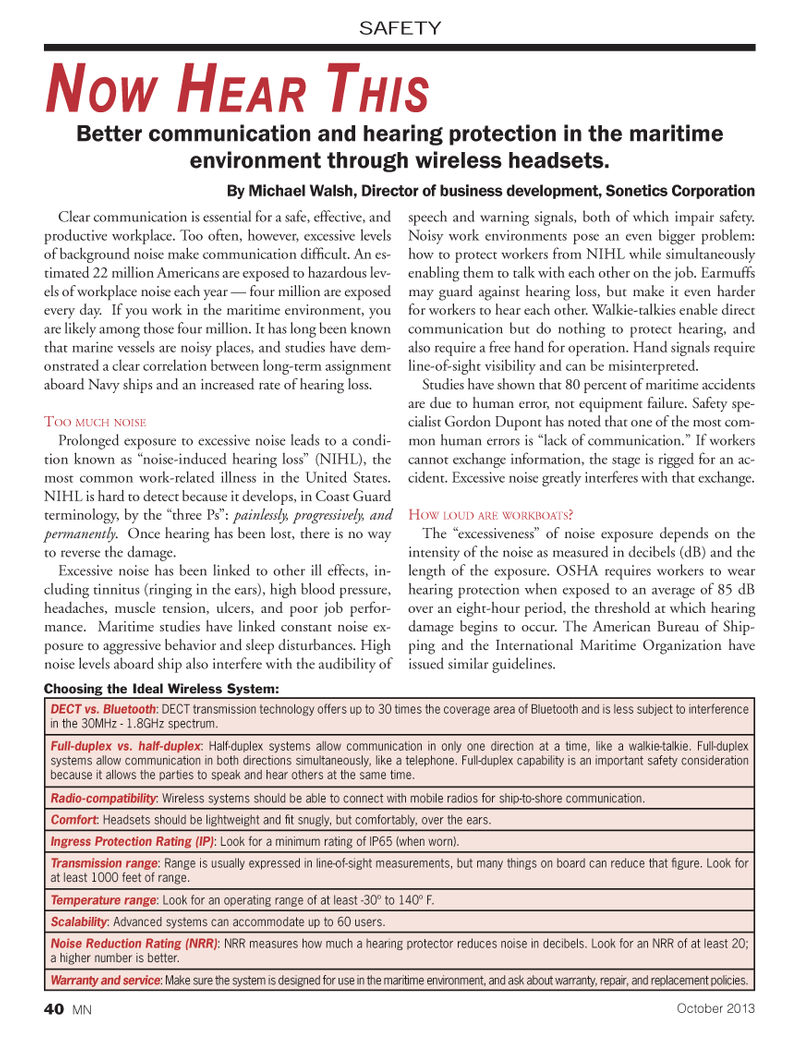 Clear communication is essential for a safe, effective, and productive workplace. Too often, however, excessive levels of background noise make communication difÞ cult. An es- timated 22 million Americans are exposed to hazardous lev- els of workplace noise each year Ñ four million are exposed every day. If you work in the maritime environment, you are likely among those four million. It has long been known that marine vessels are noisy places, and studies have dem- onstrated a clear correlation between long-term assignment aboard Navy ships and an increased rate of hearing loss. TOO MUCH NOISEProlonged exposure to excessive noise leads to a condi- tion known as Ònoise-induced hearing lossÓ (NIHL), the most common work-related illness in the United States. NIHL is hard to detect because it develops, in Coast Guard terminology, by the Òthree PsÓ: painlessly, progressively, and permanently . Once hearing has been lost, there is no way to reverse the damage. Excessive noise has been linked to other ill effects, in- cluding tinnitus (ringing in the ears), high blood pressure, headaches, muscle tension, ulcers, and poor job perfor- mance. Maritime studies have linked constant noise ex- posure to aggressive behavior and sleep disturbances. High noise levels aboard ship also interfere with the audibility of speech and warning signals, both of which impair safety. Noisy work environments pose an even bigger problem: how to protect workers from NIHL while simultaneously enabling them to talk with each other on the job. Earmuffs may guard against hearing loss, but make it even harder for workers to hear each other. Walkie-talkies enable direct communication but do nothing to protect hearing, and also require a free hand for operation. Hand signals require line-of-sight visibility and can be misinterpreted. Studies have shown that 80 percent of maritime accidents are due to human error, not equipment failure. Safety spe- cialist Gordon Dupont has noted that one of the most com- mon human errors is Òlack of communication.Ó If workers cannot exchange information, the stage is rigged for an ac- cident. Excessive noise greatly interferes with that exchange. HOW LOUD ARE WORKBOATS ?The ÒexcessivenessÓ of noise exposure depends on the intensity of the noise as measured in decibels (dB) and the length of the exposure. OSHA requires workers to wear hearing protection when exposed to an average of 85 dB over an eight-hour period, the threshold at which hearing damage begins to occur. The American Bureau of Ship- ping and the International Maritime Organization have issued similar guidelines.DECT vs. Bluetooth: DECT transmission technology offers up to 30 times the coverage area of Bluetooth and is less subject to interference in the 30MHz - 1.8GHz spectrum.Full-duplex vs. half-duplex: Half-duplex systems allow communication in only one direction at a time, like a walkie-talkie. Full-duplex systems allow communication in both directions simultaneously, like a telephone. Full-duplex capability is an important safety consideration because it allows the parties to speak and hear others at the same time. Radio-compatibility: Wireless systems should be able to connect with mobile radios for ship-to-shore communication. Comfort : Headsets should be lightweight and Þ t snugly, but comfortably, over the ears. Ingress Protection Rating (IP) : Look for a minimum rating of IP65 (when worn). Transmission range : Range is usually expressed in line-of-sight measurements, but many things on board can reduce that Þ gure. Look for at least 1000 feet of range. Temperature range : Look for an operating range of at least -30¼ to 140¼ F. Scalability: Advanced systems can accommodate up to 60 users.Noise Reduction Rating (NRR): NRR measures how much a hearing protector reduces noise in decibels. Look for an NRR of at least 20; a higher number is better.Warranty and service : Make sure the system is designed for use in the maritime environment, and ask about warranty, repair, and replacement policie s.NOW H EAR T HIS NOW HEAR THISBetter communication and hearing protection in the maritime environment through wireless headsets. By Michael Walsh, Director of business development, Sonetics Corporation SAFETYChoosing the Ideal Wireless System: October 201340 MNMN October2013 Layout 32-49.indd 40MN October2013 Layout 32-49.indd 409/30/2013 11:32:53 AM9/30/2013 11:32:53 AM