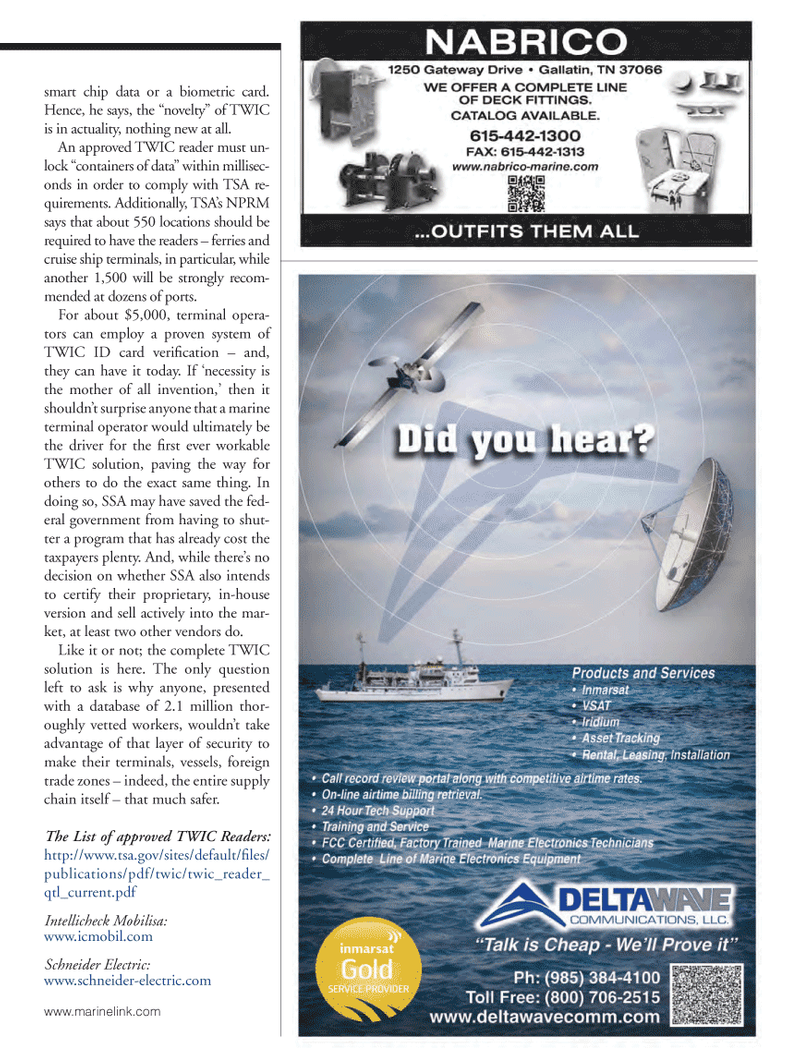 smart chip data or a biometric card. Hence, he says, the ?novelty? of TWIC is in actuality, nothing new at all. An approved TWIC reader must un- lock ?containers of data? within millisec- onds in order to comply with TSA re- quirements. Additionally, TSA?s NPRM says that about 550 locations should be required to have the readers ? ferries and cruise ship terminals, in particular, while another 1,500 will be strongly recom- mended at dozens of ports. For about $5,000, terminal opera- tors can employ a proven system of TWIC ID card veri cation ? and, they can have it today. If ?necessity is the mother of all invention,? then it shouldn?t surprise anyone that a marine terminal operator would ultimately be the driver for the  rst ever workable TWIC solution, paving the way for others to do the exact same thing. In doing so, SSA may have saved the fed- eral government from having to shut- ter a program that has already cost the taxpayers plenty. And, while there?s no decision on whether SSA also intends to certify their proprietary, in-house version and sell actively into the mar- ket, at least two other vendors do. Like it or not; the complete TWIC solution is here. The only question left to ask is why anyone, presented with a database of 2.1 million thor-oughly vetted workers, wouldn?t take advantage of that layer of security to make their terminals, vessels, foreign trade zones ? indeed, the entire supply chain itself ? that much safer. The List of approved TWIC Readers: http://www.tsa.gov/sites/default/ les/publications/pdf/twic/twic_reader_qtl_current.pdf Intellicheck Mobilisa: www.icmobil.com Schneider Electric: www.schneider-electric.com www.marinelink.com MN October2013 Layout 18-31.indd 31MN October2013 Layout 18-31.indd 319/30/2013 11:25:59 AM9/30/2013 11:25:59 AM