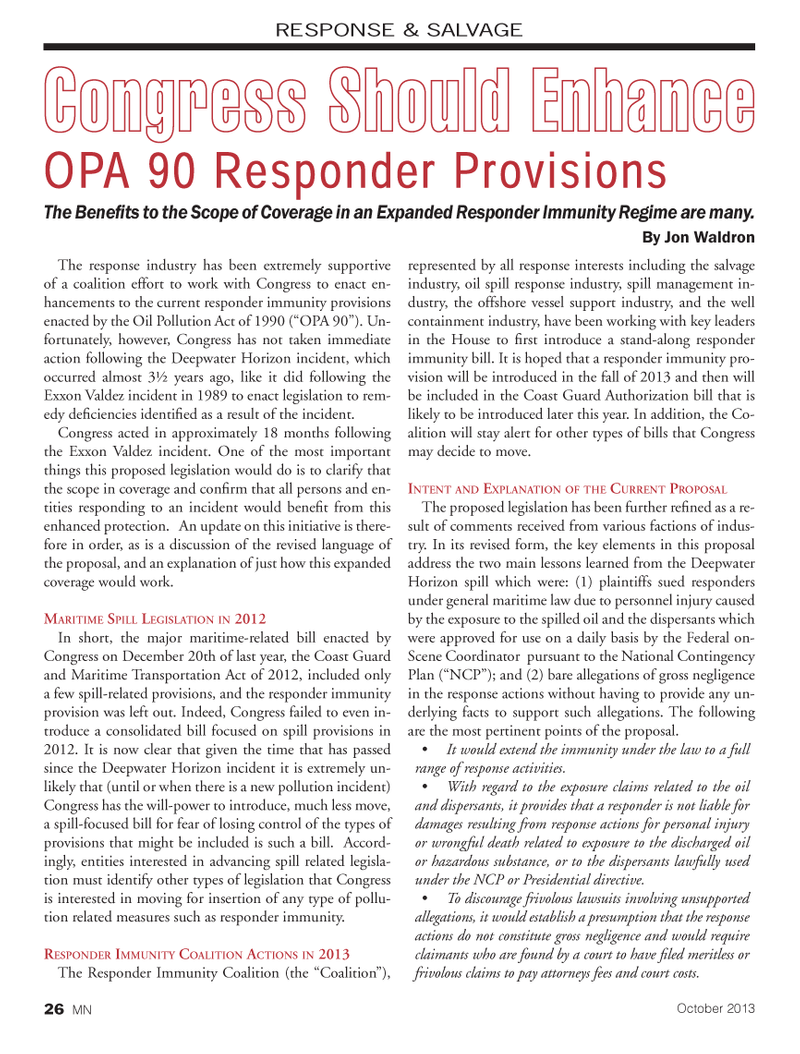 The response industry has been extremely supportive of a coalition effort to work with Congress to enact en- hancements to the current responder immunity provisions enacted by the Oil Pollution Act of 1990 (?OPA 90?). Un- fortunately, however, Congress has not taken immediate action following the Deepwater Horizon incident, which occurred almost 3½ years ago, like it did following the Exxon Valdez incident in 1989 to enact legislation to rem- edy de ciencies identi ed as a result of the incident. Congress acted in approximately 18 months following the Exxon Valdez incident. One of the most important things this proposed legislation would do is to clarify that the scope in coverage and con rm that all persons and en- tities responding to an incident would bene t from this enhanced protection. An update on this initiative is there- fore in order, as is a discussion of the revised language of the proposal, and an explanation of just how this expanded coverage would work. MARITIME SPILL LEGISLATION IN 2012In short, the major maritime-related bill enacted by Congress on December 20th of last year, the Coast Guard and Maritime Transportation Act of 2012, included only a few spill-related provisions, and the responder immunity provision was left out. Indeed, Congress failed to even in- troduce a consolidated bill focused on spill provisions in 2012. It is now clear that given the time that has passed since the Deepwater Horizon incident it is extremely un- likely that (until or when there is a new pollution incident) Congress has the will-power to introduce, much less move, a spill-focused bill for fear of losing control of the types of provisions that might be included is such a bill. Accord- ingly, entities interested in advancing spill related legisla- tion must identify other types of legislation that Congress is interested in moving for insertion of any type of pollu- tion related measures such as responder immunity. RESPONDER IMMUNITY COALITION ACTIONS IN 2013The Responder Immunity Coalition (the ?Coalition?), represented by all response interests including the salvage industry, oil spill response industry, spill management in- dustry, the offshore vessel support industry, and the well containment industry, have been working with key leaders in the House to  rst introduce a stand-along responder immunity bill. It is hoped that a responder immunity pro- vision will be introduced in the fall of 2013 and then will be included in the Coast Guard Authorization bill that is likely to be introduced later this year. In addition, the Co- alition will stay alert for other types of bills that Congress may decide to move. INTENT AND EXPLANATION OF THE CURRENT PROPOSAL The proposed legislation has been further re ned as a re- sult of comments received from various factions of indus- try. In its revised form, the key elements in this proposal address the two main lessons learned from the Deepwater Horizon spill which were: (1) plaintiffs sued responders under general maritime law due to personnel injury caused by the exposure to the spilled oil and the dispersants which were approved for use on a daily basis by the Federal on- Scene Coordinator pursuant to the National Contingency Plan (?NCP?); and (2) bare allegations of gross negligence in the response actions without having to provide any un- derlying facts to support such allegations. The following are the most pertinent points of the proposal.  It would extend the immunity under the law to a full range of response activities.  With regard to the exposure claims related to the oil and dispersants, it provides that a responder is not liable for damages resulting from response actions for personal injury or wrongful death related to exposure to the discharged oil or hazardous substance, or to the dispersants lawfully used under the NCP or Presidential directive.  To discourage frivolous lawsuits involving unsupported allegations, it would establish a presumption that the response actions do not constitute gross negligence and would require claimants who are found by a court to have  led meritless or frivolous claims to pay attorneys fees and court costs. Congress Should Enhance OPA 90 Responder Provisions OPA 90 Responder Provisions The BeneÞ ts to the Scope of Coverage in an Expanded Responder Immunity Regime are many. By Jon Waldron RESPONSE & SALVAGE 26 MNOctober 2013MN October2013 Layout 18-31.indd 26MN October2013 Layout 18-31.indd 269/30/2013 11:24:41 AM9/30/2013 11:24:41 AM